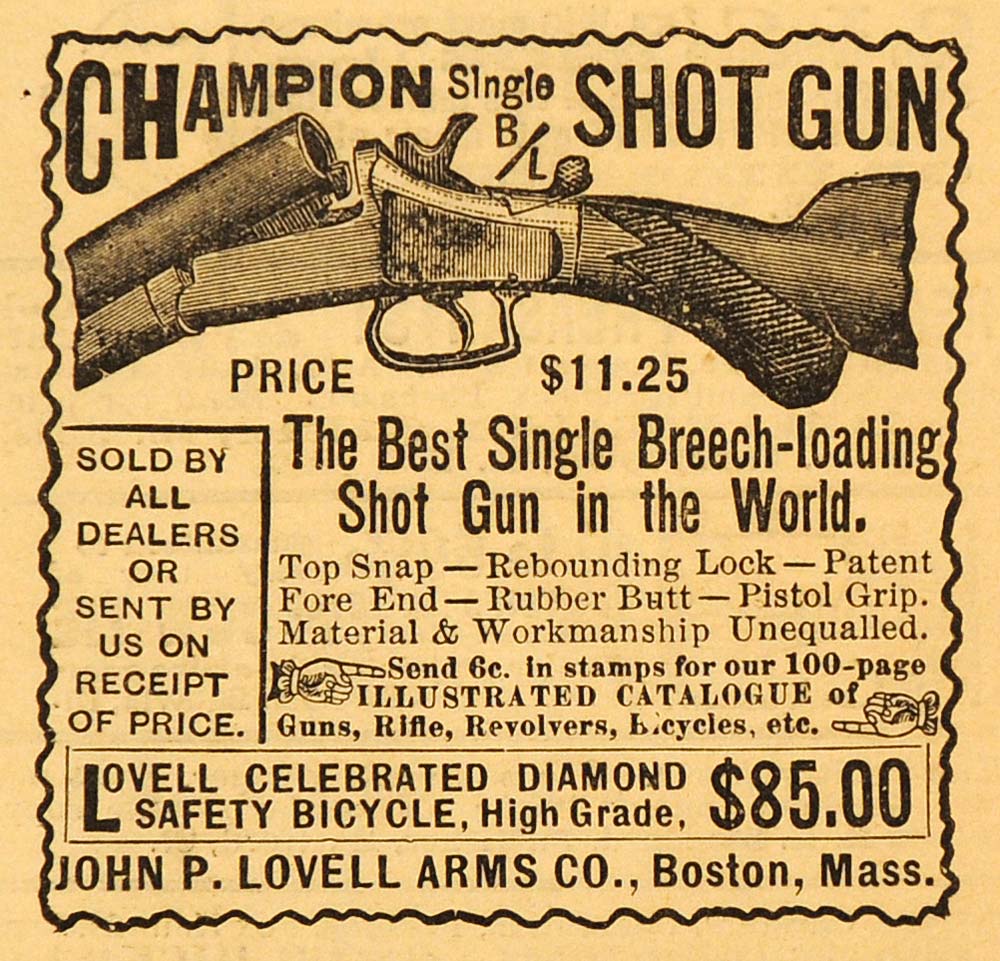 If there was unemployment, I never saw it.  Dad worked all day, came home to his wife and kids, and the next day, did it again.  Dad had served in the war; most of the men in town had.  It was a common experience; a shared duty, and most of them never talked about it.  Crime was virtually non-existent.

I had a job from the time I was nine.  I rolled newspapers, pedaled out on sunny days, but also on freezing and rainy mornings, and delivered them, rain or shine.  It was an extension of the chores I was expected to perform around the house, but the difference was, I got PAID for it!

What to do with this new-found wealth?    Flush with new-found capital, I headed over to the Western Auto store, and, under my father’s watchful eye, purchased a lever-action Daisy BB gun.  With dad as instructor, I learned the rudiments of marksmanship, caring for the Daisy, and most of all, the responsibility that the ownership of a gun entailed.

But it was on vacation one year, in upstate Michigan, that this budding young outdoorsman received his true baptism of fire.

My Uncle Vic was a sportsman of the old school.  He hunted to eat, and if he shot it, he ate it.  Those things are not necessarily exclusive, but each had a clearly defined purpose, in his mind.  When I came out, on a trip straddling my 12th birthday, he opined to dad, that it was time that I got to use a REAL gun.

The gun which he had in mind was an elderly (even then!) J.C. Higgins, single shot, hammer-fired, 12 gauge shotgun.  He brought it out from the gun closet, wrapped in an old Navy blanket, and put it on the kitchen table.  My eyes banged open, as wide as saucers, the first time I beheld it.  A REAL gun!

The moment I laid eyes on it, I knew I had to have it.

It smelled of gun oil and mothballs; truly, that must have been the smell of manhood.  The wood was lovely walnut, capped with a steel buttplate.  The barrel rested in a slender forend that felt like it was just made for my adolescent  hand.  I swung it up, my cheek rested on the stock, and my eye was drawn, straight and true, to the delicate brass bead, way out there on the end of that 28-inch barrel.  It felt like an extension of me, did that Real Gun.   I felt like I could hit any target that ever crawled, walked or flew, with it.

In truth, it was nothing more than a plain-Jane J.C. Higgins 101, identical to the Savage 94.  It had a hammer spring like the leaf spring for a flatbed truck, and a trigger pull that must have been forged in a cement factory, and recoil that would rattle your teeth.   But it flat-out WORKED.

Millions of these were built, these, as H&R Toppers, Winchester Model 37s, and a dozen other long-forgotten names, but they all had this in common; they were as simple as a mechanical contrivance can be made.  A hinge lever, a hammer, and a trigger.  They were cheap, made by everyone, it seems;  whether sold as Iver Johnson, Western Auto, J. C. Higgins, Sears, Savage, or Montgomery Wards, they were simple, light, handy, and they flat out worked.   Millions of them are still around, in barns, attics, basements, and garages, throughout the Midwest.

So it was that, early one misty summer morning, we headed out to the country with a couple of shotguns, a hand thrower and some clay pigeons, and a few boxes of shells.  When we dismounted the truck, I was allowed to carry the Higgie, carefully broken open and empty, out the grassy meadow that was to be our impromptu range.

Under dad’s watchful supervision, Uncle Vic gave me the inevitable ‘safety first’ lecture, followed by a primer on shotgunning; feet apart, arms relaxed, cheek on the stock, swing through the target.  I might actually have heard some of these instructions.  Mostly what I heard was the blood roaring in my ears.  I was holding a REAL shotgun, and I was ready to go!

Uncle Vic gave dad a meaningful nod, and handed me a couple of shells.  They were big; dwarfing the .22s that I had handled so far in my life.  (I was  about to learn a lesson in physics, as well, but I was far too excited to notice, at the time…)  I carefully dropped one in the chamber, snapped the gun shut (ooh, that reassuring click of well-fitted steel on steel!) and nodded at Uncle Vic.

He grinned, put a pigeon in the thrower, and with a practiced snap, arced it right in front of my barrel.  I swung up the shotgun, floated the pigeon just above the bead, and pulled the trigger… BANG!

And wondered why I was suddenly  sitting on the seat of my pants, eyes watering, in an up-state Michigan corn field.  My cheek stung a bit, I was completely embarrassed, and yet, as dad and Uncle Vic ran over to pick me up, I was grinning like a loon.

You see, the last thing I saw, before the sky turned to ground, was that clay pigeon shattering into a zillion pieces.  The instruction was good, my aim was true, and that clay bird never had a chance.

I learned a lot, that day.  One of them was that I could DO it – I could walk in a world of men.  The other was that physics lesson; that big shells, loaded into a light, slender 12 gauge, would kick like a mule!  (Something that Featherlight shells, had they been available back then, might have mitigated.) But that whole, transcendent event, the blast, the recoil, the sting, was all part of the Grander Experience, of the transition from child’s toy to real firearm, more, from boyhood, into manhood.  I couldn’t wait to do it again.

I fired about 10 more rounds before my adolescent shoulder begged for a break.  I knew nothing of Featherlight shells, or of recoil pads.  That recoil was the cost of manhood, and I gladly paid it.  For, at that small pricer, a bond was formed that day, between boy and man, man and gun, child and family.

Uncle Vic is long gone now, but before he passed, he made certain that, in his will, a long-barreled slip of a J.C. Higgins was endowed to his nephew, Mark.  I still have it, and I wouldn’t sell it for a thousand bucks.

I would learn later that it was the Sears trade name for the Savage Model 94.  I would learn that they are as solidly made as anything ever produced in America; that you can still buy a new one, today.  I have seen a terrific shotgunner of my acquaintance, out shoot a field of talented shooters, one fine weekend, with an Iver johnson single shot, beating the pants off of a field of well-heeled sportsmen, all shooting Perazzis, Brownings, and the like. (That was fun!)

I never did figure out who J.C. Higgins was, or what his connection was to the sporting world, but I still have that fine old gun.

You could have one, and start your own family tradition, too.  It’s not a big-ticket item, but it’s the kind of thing that will give a lifetime of satisfaction, and hard use.  It’s the kind of useful gun that we buy, sell, and consign, here at Lock, Stock, and Barrel.

Just please, start your kids off with Featherlights….