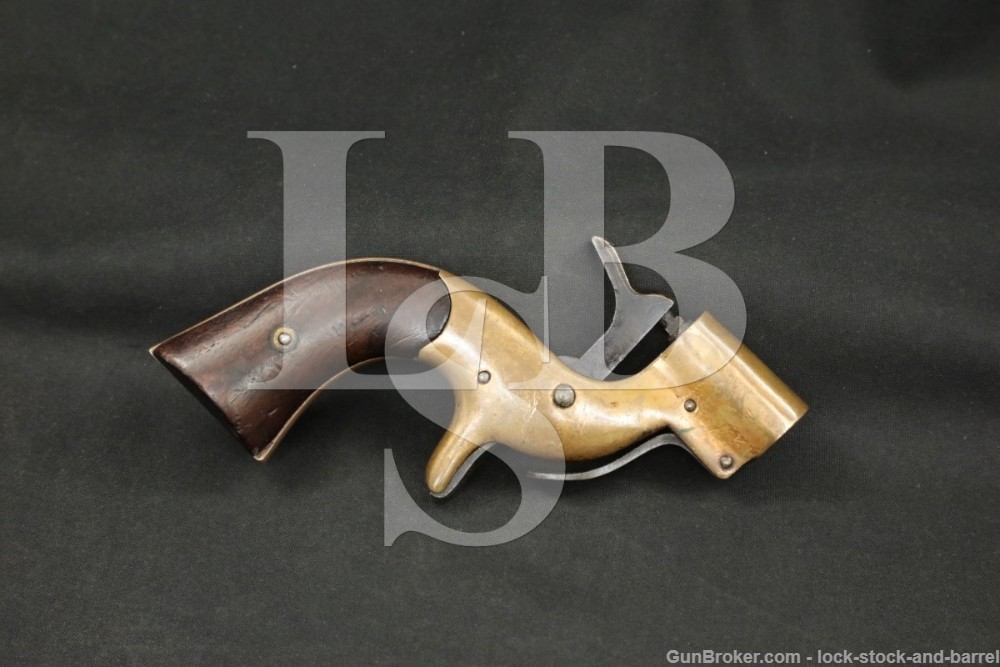 Serial Number: The frame is marked both “88” and “85”, with “85” inside the sideplate and “88” inside each grip. We are not sure which is a serial number and which is an assembly number.

Caliber: This signal pistol is designed for use with Coston Light cartridges. See Our Assessment for more information.

Barrel Length: The chamber depth is approximately 1″, intended only to hold the wooden rear portion of the Coston Light with the flare portion exposed.

Stock Configuration & Condition: The grips are two-piece smooth walnut panels. The grips have several scattered light nicks, scuffs, scratches and general handling wear. There are some spots of thinning finish. The right panel has a small loss at the bottom-front corner and there is a tiny loss at the bottom-rear corner of the left panel. There are no cracks. Overall, the grips are in Very Good-Fine condition as Antique.

Finish Originality: The brass finish is Original, we believe that the lacquer was added to the steel parts.

Overall Condition: This handgun retains about 85% of its metal finish. The brass shows a mustard patina with some scattered light wear, nicks and scratches. The hammer retains much of its coating while the lacquer has worn off of most of the exposed portions of the lever and trigger. The screw heads are tool marked with strong slots. The markings are clear. The nipple shows light wear and erosion, but is not obstructed. Overall, this signal pistol is in about Fine condition as Antique.

Mechanics: The action functions correctly. The lever properly lowers and raises the toothed bar inside the chamber and closes up with no play. The single action trigger pull is crisp. We did not fire this signal pistol. As with all used firearms, a thorough cleaning may be necessary to meet your maintenance standards.

Our Assessment: It is difficult, today, to imagine a world without instant communications. While we are now able to communicate across the globe, wirelessly, near-instantaneously, this was not always the case. Even wired communication was just coming into common use at the outbreak of the Civil War. For communications in a battle environment in the 1860s, laying a wire was not always possible, and communication which didn’t involve sending a paper message with a writer was basically limited to line of sight and audible commands. One man who was interested in developing means of battlefield communications was Albert J. Myer, a doctor who had joined the Army as an assistant surgeon but would explore his interest in signaling, developing “wig-wag signaling”, a code which would provide communications with only a single flag or lantern. Shortly after the outbreak of the Civil War, Myer was promoted to Major and granted $2,000 to form the U.S. Army Signal Corps, essentially without any guidance on how to go about doing so. He immediately set to the task and while the Corps would not officially come into being until 1863, Myer nevertheless explored a number of different means of improving battlefield communication, including the use of signal flares. These early signal pistols used a flare cartridge developed by Benjamin Franklin Coston, and ultimately finished and patented by his widow, Martha Coston. The cartridge was ignited by a percussion cap and there were a variety of different colored flares which could be used including combinations of colors. The code developed had 12 combinations of flares, a “P” or preparatory flare to ensure that the intended recipient knew a code was to be transmitted, numbers from 0-9, and an “A” or acknowledgment flare to let the sender know that the code had been received. This allowed coded messages to be sent within line of sight and to be properly deciphered over the din of battle. There were a few different variations of the signal pistol with the earliest 1861 and this, the 1862 models made by William Marston of New York. Approximately 1,000 of this model were produced for the US Army, and this one has survived the last 160 years quite well. This is an important artifact of the history of the Army Signal Corps as well as the Civil War. There’s no telling what messages it could have been used to convey in which battles, but it was certainly there for one of the most pivotal times in American History. It will make a fine addition to a Civil War or Signal Corps collection. Please see our photos and good luck!