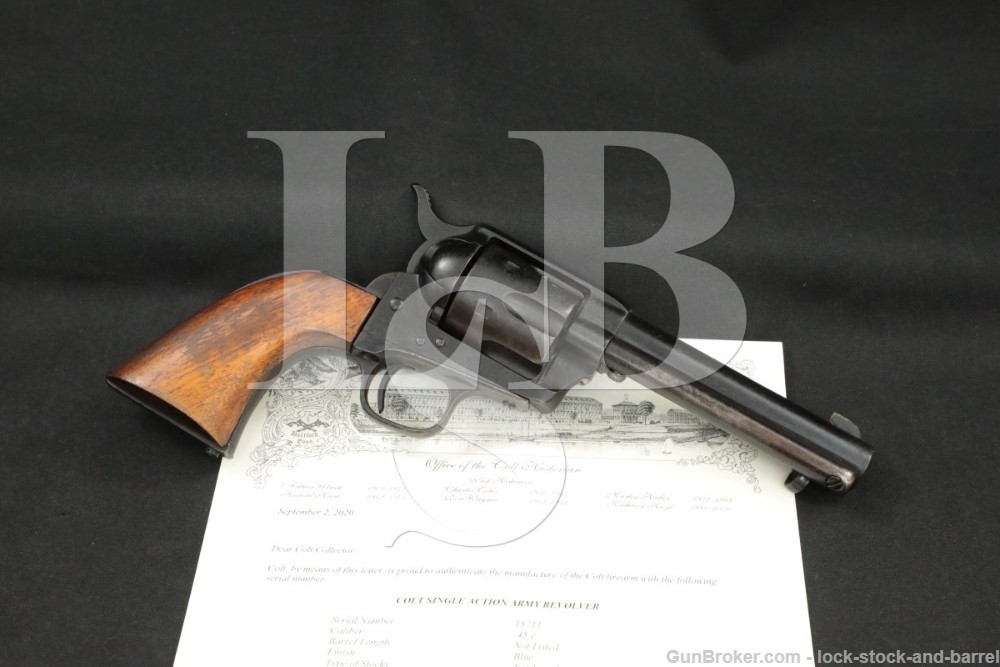 Sights / Optics: The front sight is a brass blade fixed to the front of the barrel. The blade has been mostly covered in black paint. The rear sight is a “V”-notch at the rear of a groove in the top strap.

Stock Configuration & Condition: The grip is one-piece smooth walnut. The grip is notably small for the frame, having gaps and excessive play. The grip has scattered light nicks, scuffs and scratches with most areas showing thinning finish. There are no chips or cracks. Overall, the grips is in about Very Good-plus condition as not original to the gun.

Bore Condition: The bore is dark gray. The rifling shows wear, but is well defined. There is light-moderate erosion throughout the bore.

Overall Condition: This revolver retains about 70% of its current metal finish. There is scattered wear in the black paint, exposing metal which has oxidation and light erosion. There is more notable erosion on the inside of the frame around the cylinder, on the front face of the cylinder, and inside the chambers. There are some scattered nicks and dings, most on the bottom of the barrel. The head of the cylinder pin is tool marked. The screw heads range from sharp to disfigured with useable slots. Some screws may be replacements, most notably the cylinder pin retaining screw. The markings range from clear to worn and incomplete. Overall, this revolver is in about Fair-Good condition as refinished Antique.

Mechanics: The hand-spring is either missing or broken. The hand does not properly advance the cylinder unless the gun is pointed down. The hammer does not catch at half-cock. The timing is off, allowing for over-rotation of the cylinder. The cylinder does not lock up properly, able to be pushed out of lock without much force. The cylinder has a removable bushing, but it is seized in place. We did not fire this revolver. As with all used firearms, a thorough cleaning may be necessary to meet your maintenance standards.

Box, Paperwork & Accessories: This revolver comes with a Colt Historian letter which notes that this revolver was shipped January 1, 1875 to H&D Folsom Arms Company in New York, New York in a shipment with 24 of the same type.

Our Assessment: Colt’s Single Action Army is, perhaps more than any other, an iconic American pistol. It was the U.S. issue sidearm for the last two decades of the 19th century, used by pioneers, outlaws and lawmen across the expanding nation, and captivated audiences on the silver screen and television (and still does, today). This is an interesting example an early Single Action Army, made in late 1874 and shipped on the first day of 1875. Intriguingly, the barrel and cylinder have serial markings off from the frame components by just one digit, and we suspect this to be a factory error. The cylinder has the characteristic small, shallow lead-in grooves of early SAA production, which gradually grew from a total lack of a groove to the standard dimensions, with the final grooves being standardized around serial 19,000. The revolver certainly shows its age, but looks better than any of us will at 150 years old! This revolver’s early features and accompanying Colt letter will make for a fine addition to a collection. Please see our photos and good luck!