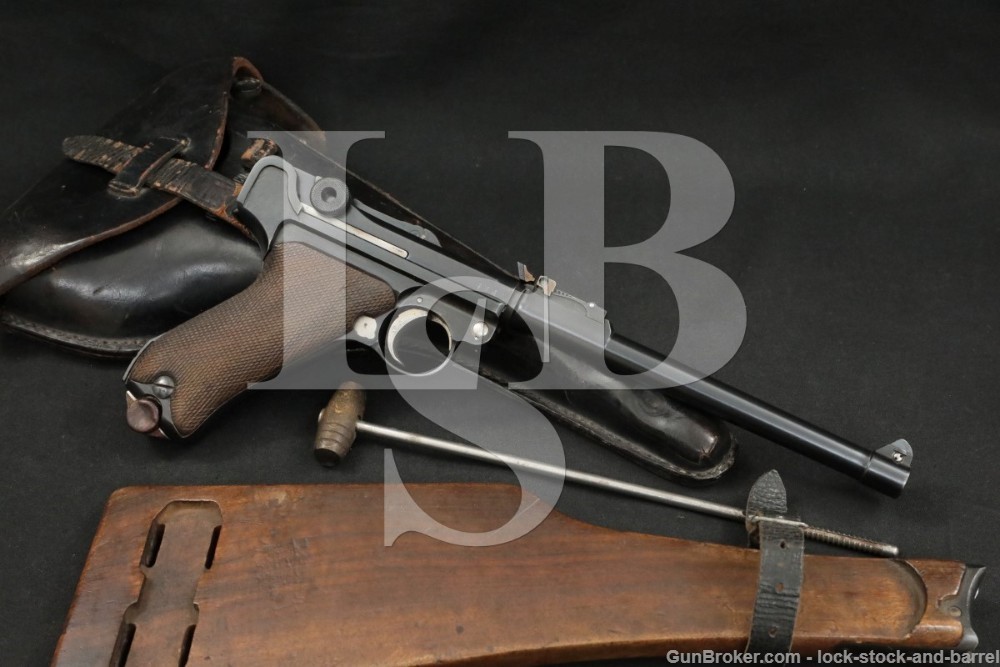 Sights / Optics: This pistol is mounted with a “Fine Tuning” front sight that has a blade dovetailed into a serrated and ramped base, with a fine-tuning adjustment for windage on the right side of the sight blade. The “Fine Tuning” tangent artillery rear sight is flat topped with a “V” notch and the elevator has graduated markings from 1-8. The rear sight has a fine adjustment for elevation.

Stock Configuration & Condition: The grips are checkered walnut. The exterior of the grips show light handling wear with some slightly smoothed checkers and a few light nicks and scuffs. The top-front corner of the left panel almost looks like it was chipped and then re-checkered, this may be a factory repair? The right panel has a long, vertical crack on the interior which has been glue-repaired. The grips rate in about Very Good overall condition.

Bore Condition: The bore is bore is semi-bright with sharp rifling. There is some scattered light erosion in the bore.

Overall Condition: This pistol retains about 95% of its current metal finish. The balance is mostly in strawed parts which have worn bright. There are a few scattered minor nicks and scuffs with a line of light wear on the left of the front sight boss. The action shows light operational wear. There is infrequent minor erosion under the finish. The markings are generally clear, some are a little shallow with soft edges. The screw heads are lightly tool marked with strong slots. Overall, this gun rates in about Fine condition as refinished.

Box, Paperwork & Accessories: This pistol comes with a black leather flap-holster, a flat board shoulder stock, a cleaning rod and a single 8-round magazine. The holster is marked “R.Kuhlewein & Co. / ERFURT / 1916″. The holster has scattered light wear and surface loss, most notable along the cleaning rod pocket, there is some fraying on the flap-strap, and the stitching is intact, in about Good-plus condition. The board shoulder stock is marked “7681 / d” on the bracket and with a crowned “S” on the board. The wood shows scattered light nicks, scuffs and scratches, the metal shows light operational wear, and the leather shows scattered light wear, in about Very Good condition. The magazine is tin-plated with a wood floorplate marked “6853 / b”. The magazine has some light wear, oxidation where the plating is worn through, intact feed lips and a strong spring, in about Very Good condition.

Our Assessment: This Artillery version of the Luger pistol is also known as the “Long Barrel P.08”. It was the first Luger to use the 32-shot snail magazine. Many of the Artillery Models were equipped with “Fine Tuning” front and rear sights, which were auto-calibrating for windage drift due to bullet spin, making them second to none in long range accuracy. This pistol is an Erfurt Artillery Luger made in 1914, the only year that they would be produced by the royal armory. For some reason, while DWM produced more than 150,000 of the Long Lugers between 1914 and 1918, Erfurt would only make about 23,000 and only in 1914. This example has matching serial numbers on the pistol itself and its grips, but the magazine and included board stock are from a different pistol. The proof and acceptance markings on the pistol are correct. This will make a great addition to a Luger collection, especially given the scarcity of the Erfurt Artillery models. Please see our photos and good luck!