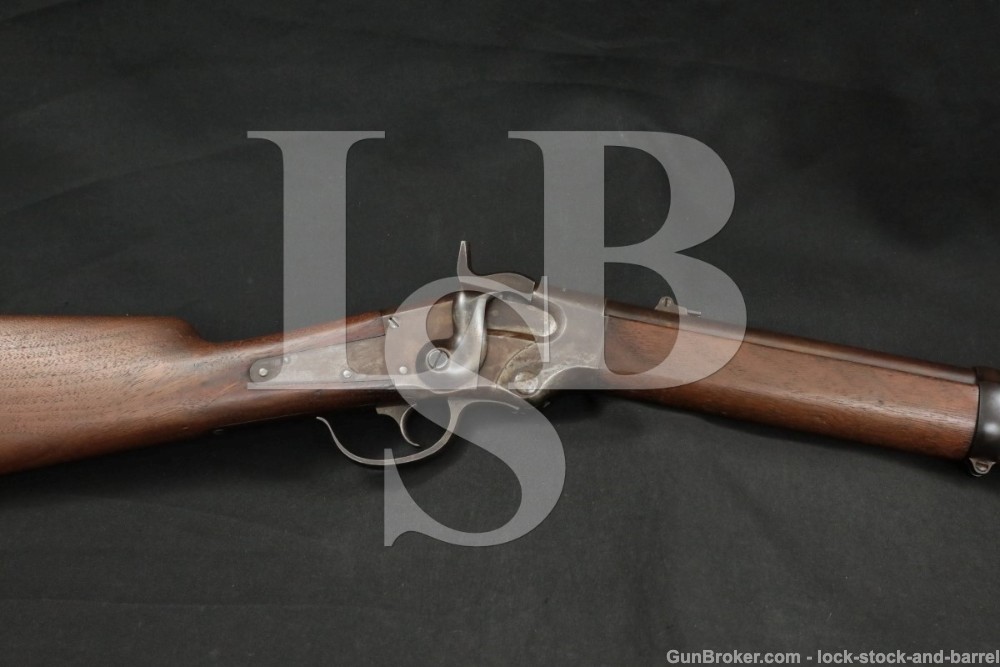 Action Type: Lever Action Repeater with a Seven Round Tubular Magazine Under Barrel

Barrel Length: The barrel is 22” in length as measured from the muzzle to the breech face.

Stock Configuration & Condition: The stocks are two piece walnut with a straight grip, a barrel band mid-way down the forend and a barrel band that doubles as a nose cap at the front of the forend. There is a blued steel carbine style buttplate on the butt. The wood shows dispersed little gashes, minor draglines, and compressions. There is a bit of material loss at the right front side of the forend. The grains of the wood have opened slightly. The wood to metal fit is excellent. The LOP measures 13” from the front of the trigger to the back of the buttplate. The buttplate shows a mottled patina with light wear at the heel and toe and a few thin scabs of solid erosion. The stocks rate in about Very Good condition as Antique.

Type of Finish: The barrel and lever were blued and the receiver was case colored.

Bore Condition: The bore is mostly bright with shallow rifling. There is moderate erosion from the muzzle back about 3 inches.

Overall Condition: This rifle retains about 3% of its metal finish. The barrel and lever have no finish remaining and both show a mottle dark patina. The front six inches of the barrel shows a few tiny dings and scrape marks through the patina where the barrel band/nosecap was drug over the barrel. There are tool marks in both the front and rear edges of the barrel band/nosecap. The receiver also has a mottled appearance and there are some dispersed little dings. The screw heads range from sharp to slightly disfigured yet serviceable. The markings are clear except for the cartouche on the stock. Overall, this rifle rates in about Very Good condition as Antique.

Mechanics: The action functions correctly. It is somewhat unique in that once the lever is closed, it is locked and can’t be opened again until the trigger is pulled. This can be done by holding the hammer with the thumb and slowly letting it down, but it is still unique. The rod that looks like a cleaning rod is actually a magazine follower that is pulled out for loading and then released to push the cartridges to the rear. We have not fired this rifle. As with all used firearms, a thorough cleaning may be necessary to meet your maintenance standards.

Box, Paperwork & Accessories: There is a sling bar on the left side of the receiver with a saddle ring attached.

Our Assessment: Albert Ball designed and patented the basic form of this gun as a pistol. Since he couldn’t find a manufacturer for it, he sold the rights to LAMSON and came to work for him. Ball became superintendent of the armory within six months and redesigned the pistol as a rifle, which was patented in August of 1864. The army contracted for the rifles in 1864, and 1002 were made and delivered in May of 1865, but they were too late to see service in the Civil War. The Ball Carbine was a 7 shot repeater with a trigger guard that acted as a lever, similar to the Spencer Carbine. Cartridges were loaded into the tubular magazine under the barrel through a port on the right side of the receiver. Its operation was actually simpler and more reliable than the more well-known Spencer Carbine. The Army wanted to restrict the number of different cartridges used, and requested that the carbine be chambered in the same cartridge used in the Spencer, the .56-50 Spencer Rimfire. The rifle has what looks like a ramrod protruding through the front of the nosecap, but this is really the magazine follower, which is pulled forward and latched for loading and then released to push the cartridges to the rear of the magazine. This rifle is in about Very Good condition with about 3% of its original finish remaining. The metal surfaces have a mottled patina. There are several spots of pitting on the right side of the receiver and breechblock with a scab of solid erosion on the lockplate. There are a few tiny dings in the front of the barrel with scrape marks where the barrel band/nosecap was slid off of the barrel. There are tool marks in the barrel band/nosecap. The wood shows a 1” long hairline crack at the back of the lockplate. There are several dings, bruises and drag lines scattered over the stocks with deeper bruises in the top of the comb. There is also a scrape mark through the finish on the left side of the forend. The wood to metal fit is excellent. The bore is mostly bright with shallow rifling and moderate erosion from the muzzle back about 3 inches. There are “S” inspection marks scattered over the metal surfaces and a rectangular cartouche with “GGS” in script on the left side of the wrist. With only 1002 having been made, this carbine is a fine and rare example of one of the most desirable collectibles of the Civil War. No collection of Civil War carbines would be complete without a Ball Carbine, and all collectors of Civil War Militaria should have an interest in this carbine. Please see our photos and good luck!