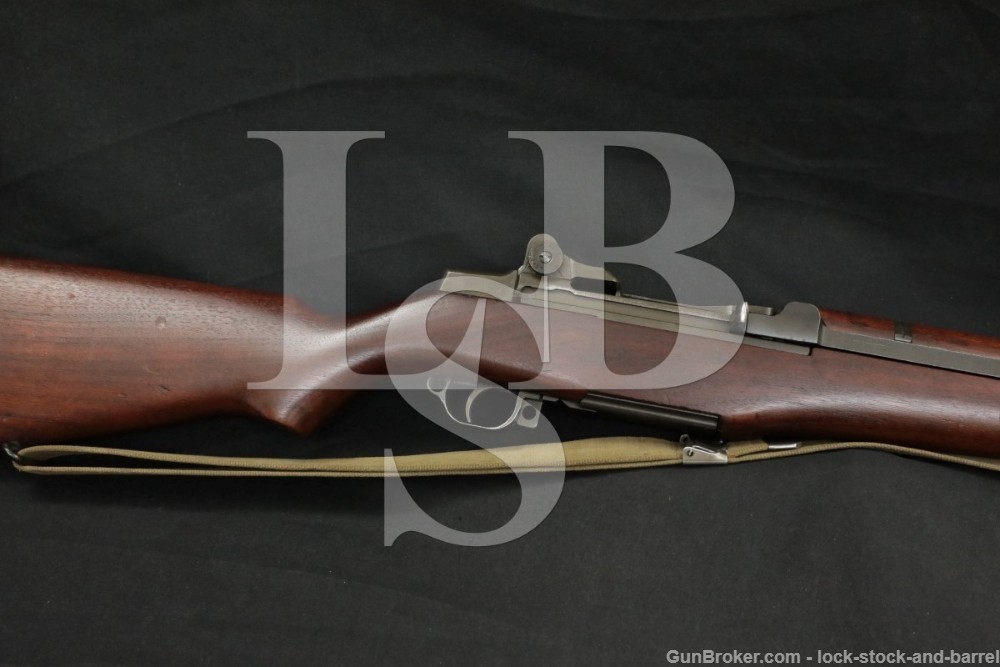 Stock Configuration & Condition: The left side of the stock (above the trigger) is marked with “boxed” Springfield Ordnance cartouche “S.A. / G.H.S.”, which is the correct cartouche for the Springfield serial number (page 134). This is next to a restamped “cross cannons” cartouche. A non-USGI die was used to restamp this mark. The face of the grip is marked with a “circled P” proof.
The hardwood stock has a pistol grip, metal nose caps, stacking loop, two sling loops and a metal buttplate with hinged door for storage in the butt. The buttplate shows scrapes & discoloration. The wood shows scrapes, scratches, and compression marks. The most prominent marks are on the left side of the butt. The top of the hand guard shows hairline surface cracks. They appear to have been repaired as they do not flex when pressure is applied. The LOP measures 13 inches from the front of the trigger to the back of the buttplate. The stock rates in about Very Good overall condition.

Bore Condition: The lands are bright and the grooves are semi bright. The rifling is deep. There is some fouling and light intermittent erosion in the grooves near the muzzle. The fouling should clean up some. The bore shows an M.E. of 0.0. The throat shows a T.E. of 0.5.

Overall Condition: This rifle retains about 94% of its metal finish. The gas tube assembly has had its finish removed. It shows scrapes. The metal shows scuffs, light scrapes and small handling marks. The right side of the receiver and front of the bolt show some thinning consistent with cycling the action. The markings are deep. Overall, this rifle rates in about Very Good Plus to Fine condition.

Box, Paperwork & Accessories: The rifle comes with an unmarked canvas sling. It shows soiling & discoloration on the canvas as well as small scrapes on the metal. Overall it is in about Very Good Plus condition.

Our Assessment: This Springfield Armory M1 Garand was made back in 1941. It eventually made its way to England as part of the “Lend-Lease” program. After WWII it was imported back into the U.S. for sales to the civilian market. It uses Springfield parts with the correct drawing numbers for the rifle’s serial number. This M1 Garand is in nice shape with deep markings on the metal that include the British Export mark and 2 British proofs on the barrel. This British M1 Garand will add nicely to a Garand collection.