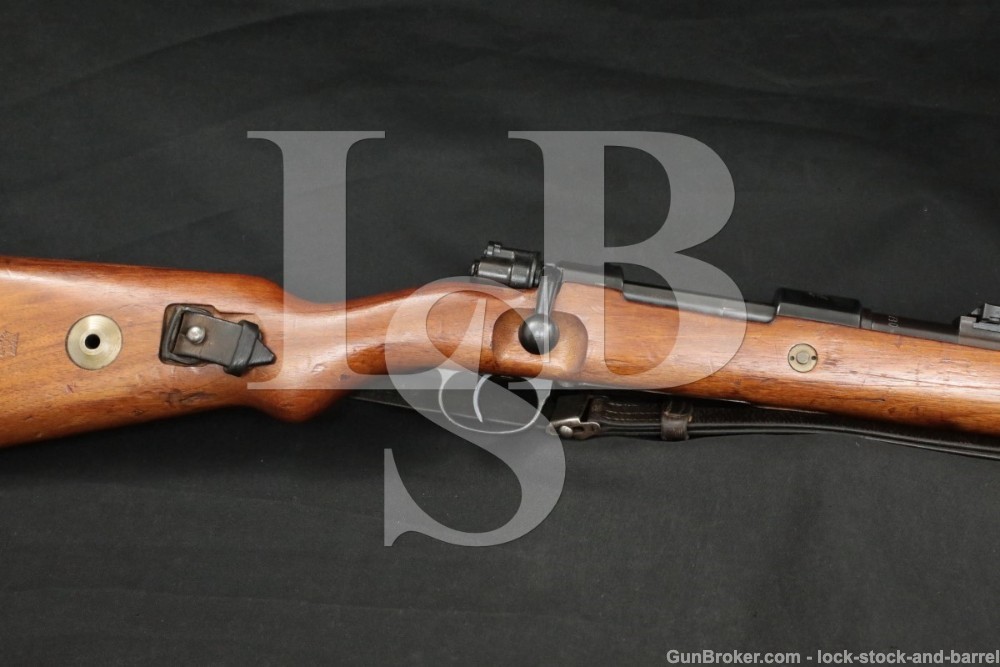 Make: Mauser Oberndorf, Germany. A Portuguese Contract Rifle.
The Portuguese contract was only half fulfilled due to WWII. The remaining Model 1941 rifles were marked & issued by the Nazis.

Sights / Optics: The front sight is an inverted “V” post set atop a ramped base and under a removable protective hood. The rear sight is a “V” notched blade attached to a sliding escalator that is marked from “2-20”.

Stock Configuration & Condition: The two piece hardwood stock has a pistol grip, nosecap with bayonet lug, hole for the included cleaning rod, barrel band with sling bar, through bolt, sling well & pass through, and a metal buttplate. The buttplate shows scrapes, small scratches and oxidation. The left side of the stock shows deep marks above the trigger which have removed wood. The wood shows several other scrapes, scratches and compression marks. The LOP measures 13 inches from the front of the trigger to the back of the buttplate. The stock rates in about Very Good overall condition.

Bore Condition: The lands are bright, the grooves are semi bright and the rifling is deep. There is fouling in the grooves which should clean up a bit. There is no visible erosion.

Overall Condition: This rifle retains about 97% of its current metal finish. The top of the receiver and the magazine floor plate have been treated with cold blue. The metal shows small scrapes, light scratches and handling marks. The front of the barrel shows small deep scratches on the top. The screw heads show light use. The markings are deep. Overall, this rifle rates in about Very Good Plus condition.

Box, Paperwork & Accessories: The rifle comes with a leather sling. It shows scrapes, discoloration and surface cracks. The metal shows scratches & oxidation. Overall it is in about Good condition.

Our Assessment: This Portuguese Mauser is a Model 1941. It was made in Germany by Mauser Oberndorf as a contract rifle back in 1941. The contract was only half fulfilled due to the German need for weapons during WWII. The remaining Portuguese marked Model 1941 rifles were re-marked & issued by the Nazis. These are scarce Mausers and are quite collectible due to the large Portuguese crests and the many Nazi markings.