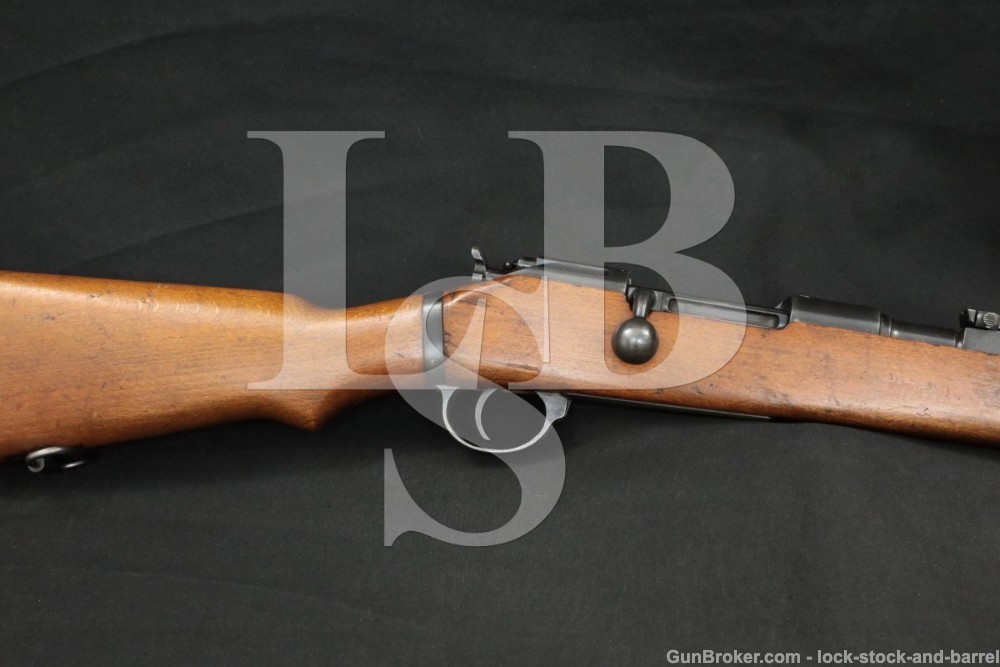 Markings: There is no visible import mark. The top of the receiver is marked “43M”. The top of the receiver is marked with a “crown / shield” acceptance stamp. The left side of the barrel shank, bottom of the magazine (twice with no letter prefix), base of the bolt handle, the bolt head (no letter prefix) and the rear of the buttplate (large) are each marked with the serial number. The barrel shank is also marked “7 9” and “circled E”. The safety lever is marked “Ny” (open) on the right and “Z” (closed) on the left. The underside of the grip and the wood ahead of the magazine are each marked with an “eagle / swastika / WaA135” Waffenamt.

Sights / Optics: The front sight is an inverted “V” post set under a protective hood. The rear sight is a “V” notched blade attached to a sliding escalator marked from “1-20”.

Stock Configuration & Condition: The hardwood stock has a pistol grip, nosecap with bayonet stud, barrel band with sling bar, sling bar on the wrist, 2 sling loops and a metal buttplate. The buttplate shows scrapes, scratches and discoloration. The stock shows several scrapes, small scratches & handling marks. Many have damaged small portions of the surface wood. The LOP measures 13 ¼ inches from the front of the trigger to the back of the buttplate. The stock rates in about Very Good overall condition.

Bore Condition: The grooves are dark and the rifling is deep. There is fouling and erosion in the grooves. The fouling should clean up some.

Overall Condition: This rifle retains about 92% of its metal finish. The barrel & bottom metal show scrapes, scratches and areas of discoloration from oxidation. The bottom metal also shows thinning. The top of the receiver shows light thin scratches. The screw heads show heavy use. The markings are deep. Overall, this rifle rates in about Very Good Plus condition.

Our Assessment: This Rare Hungarian 43M (1943 Mannlicher) is the Hungarian version of the Nazi contract G98/40 Infantry Rifle (German Gewehr 98/40). It was made by Fémáru Fegyver és Gépgyár (FEG) in Budapest sometime between 1943 and 1945. It is over 75 years old and still looks great for its age. The rifle has Nazi markings with intact “eagles” and “swastikas” on wood.
For more information and photos see www.hungariae.com/Mann43.htm. Good Luck.