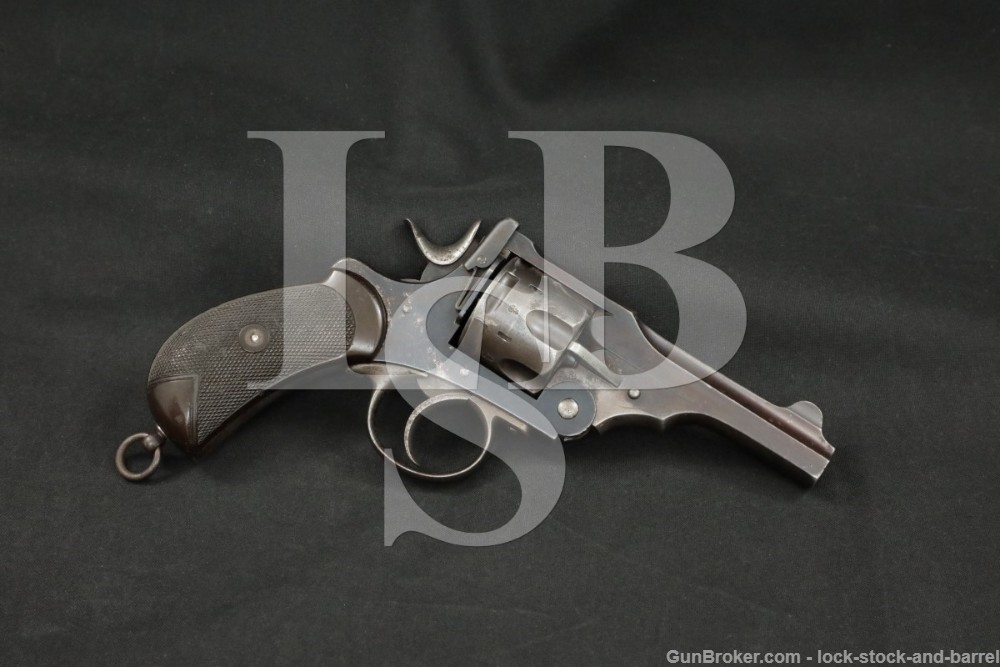 Markings: The left side of the frame below the cylinder is marked “WEBLEY / MARK I / PATENTS”. The underside front face of the barrel and the underside of the frame in front of the trigger guard are marked “14919”. The cylinder appears to have been marked with a matching serial number, but much of this marking was removed when the cylinder was relieved. The top of the backstrap is marked “N”, the backstrap below this is marked “69”. There are British martial and commercial proofs as well as broad arrows on most parts. There is a rather large and deep broad arrow marked on the topstrap. The left of the barrel has “ENGLAND” export-mark stamped twice, both markings are poorly struck and incomplete.

Stock Configuration & Condition: The grips are two-piece checkered black hard rubber. The left panel is black, but the right has gone to a brown color. The grips have some scattered nicks, scuffs, scratches and general light handling wear. The checkering is well defined. There are no chips or cracks. Overall, the grips are in about Fine condition as Antique.

Overall Condition: This handgun retains about 60% of its current metal finish. The finish is thinning at all edges. The strongest finish is in the frame flats. The grip areas are mostly worn to white. The barrel has scattered worn areas which have gone to a light patina and there are patches below the holster wedges on each side which are worn to white. The cylinder has mostly gone to a light patina. There are some scattered nicks, scuffs, scratches, light surface oxidation and some spots of solid erosion. The action shows operational wear. The screw heads range from sharp to tool marked with strong slots. The markings are generally clear, some are poorly struck and a few are slightly obscured by erosion. Overall, his handgun rates in about Very Good condition as refinished and modified Antique.

Mechanics: The action functions correctly. The barrel locks up with minor play to the frame. The cylinder locks up with light-moderate play on each chamber. The double action trigger is smooth. The single action trigger pull is crisp. We did not fire this handgun. As with all used firearms, a thorough cleaning may be necessary to meet your maintenance standards.

Our Assessment: P. Webley and Son received their first contract to produce the hinged frame Mark I revolver for the British Government in 1890. From lessons learned with this revolver and from their W.G. line of commercial revolvers, continual improvement in the design occurred, finally evolving into the Mark VI in 1916. About 35,000 of the Mark I revolvers were produced for the British government between 1890 and 1894, including this example. It has had its cylinder relieved for use with .45 ACP moon clips, a common modification on the revolvers which made their way across the pond, though care should be taken not to use loads which will exceed pressures safe for use in this revolver. The revolver is in about Very Good condition as Antique with about 60% of its new blue finish remaining. The bore is still decent and the mechanics are fairly strong. This revolver probably has quite a history if it could be told. It could very easily have seen use in any of the armed conflicts and small wars England participated in at the turn of the century. This revolver should be of interest to collectors of military weapons, especially those interested in British service weapons. About 40,000 were made in total, it is impossible to guess how many were lost in their African campaigns and the Boxer Rebellion, but there can’t be that many left today, especially with matching numbers. Please see our photos and good luck!