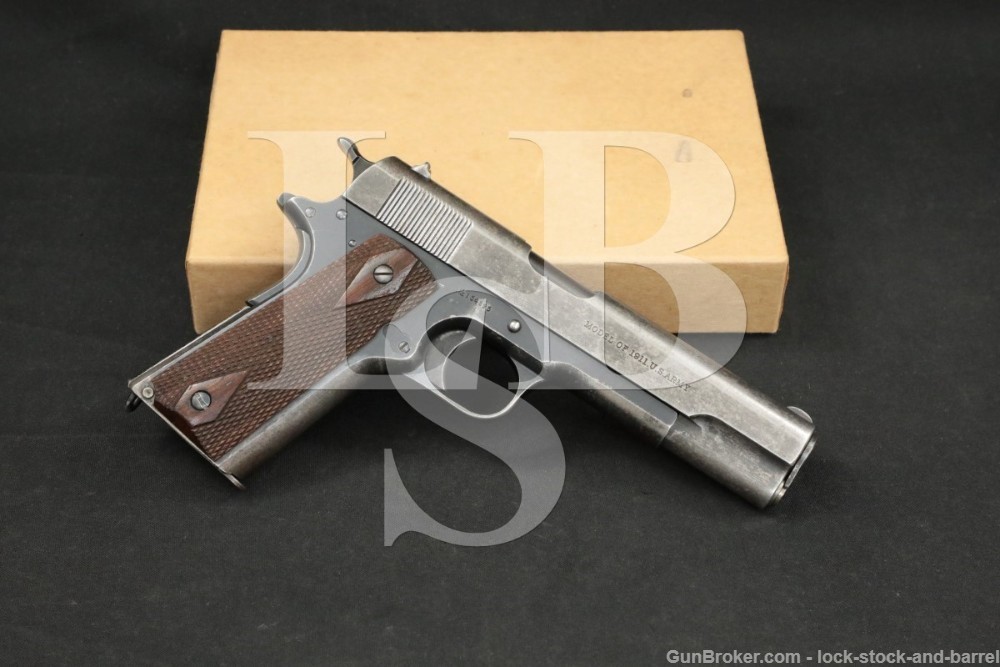 Stock Configuration & Condition: The grips are checkered walnut with smooth diamonds around the grip screws. The grips show minor handling wear with only a few scattered light marks. The checkering is generally sharp. There are no chips or cracks. The right panel has slightly more clearance at the mainspring housing pin than the left. The grips rate in about  Fine-Excellent condition as not original to the gun.

Finish Originality: The finish is original to the parts, some parts may have been replaced, most notable the barrel whose markings indicate later production.

Overall Condition: This pistol retains about 60% of its metal finish. The finish is thinning at all edges. The strongest finish is in the frame flats. Other surfaces show finish wear consistent with handling and cleaning out surface oxidation. The slide has some scattered light erosion which has been scrubbed out. There is some scattered minor surface oxidation, mostly under the grip panels. There are several scattered light nicks, scuffs and scratches. The barrel bushing is cracked on the bottom edge of the front face. The action shows operational wear. The screw heads range from sharp to tool marked with strong slots. The markings are clear. Overall, this pistol is in about Good condition and would rate Very Good but for the cracked bushing.

Mechanics: The barrel bushing is cracked on the bottom edge of the front face. The action functions correctly. The trigger pull is crisp. The slide has very little play to the frame. We have not fired this pistol. As with all used firearms, a thorough cleaning may be necessary to meet your maintenance standards.

Box, Paperwork & Accessories: This pistol comes with one blued two-tone magazine with the body coming down flush with the bottom edge of the floorplate and the floorplate secured by two rivets on each side. The magazine shows light operational wear, some minor surface oxidation, some minor erosion on the left toward the front, intact feed lips and a strong spring, in about Very Good condition.  Also included is a Robert’s Arms Specialties Protecta-Gun two-piece cardboard box with a hand-written label which has this pistol’s information. The box shows little in the way of storage wear, in Fine-Excellent condition.

Our Assessment: The 1911 and 1911-A1 pistols served the military of the United States from 1911 to 1985, through two World Wars and the Korean and Vietnam wars. They gained a reputation as a reliable handgun with plenty of stopping power, and are held in high regard by those who have used them. This is a Colt Model 1911 that was made during WWI in 1917. The pistol has a brushed blue finish that was instigated in 1917 because the Army thought the bright blued finish was not durable enough. The pistol is in about Very Good condition with 60% of its original finish remaining. The bore has some minor erosion but retains strong rifling. This is a pistol which has honest wear consistent with an issued sidearm in one of the most destructive conflicts in history, and will make a nice addition to a WWI small arms or 1911 specific collection. Please see our photos and good luck!