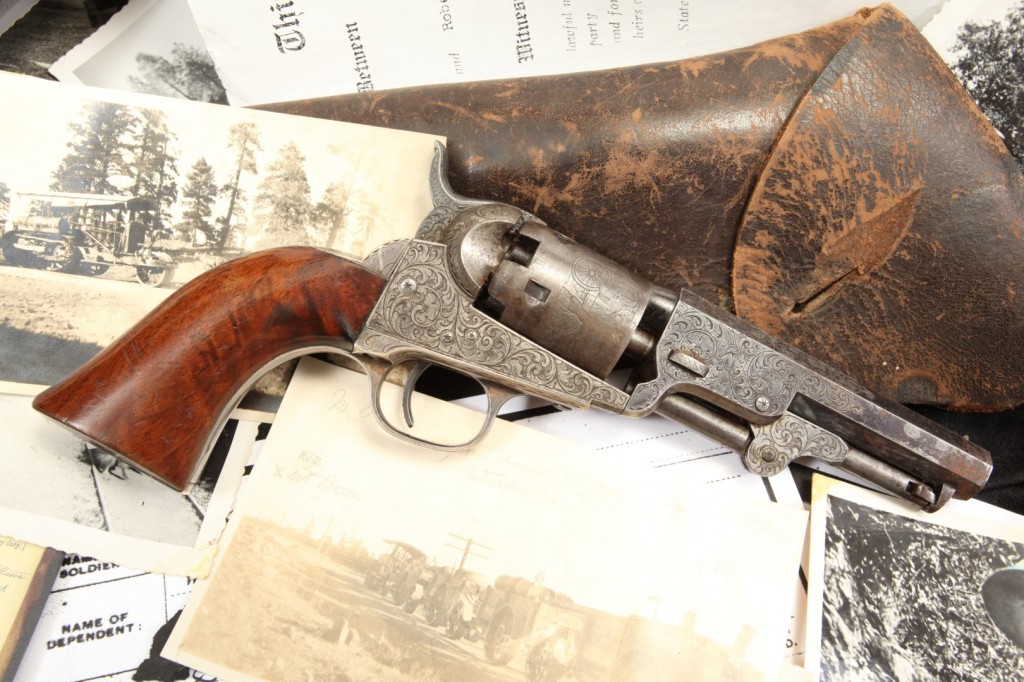 Luther Ashley was born in Ohio in 1834 and died in California in 1930. He was a California miner who came to Sutter County California in search of Gold, which he found and became the first of 3 generations of Ashley family miners.

At the age of 30 (in 1865), Luther Ashley enlisted  in Company G of the 191st Ohio Infantry Regiment to fight for the Union. Luther Mustered out of the Service 6 months after enlistment and moved to California. The exact date he, his son Lloyd and his wife Melissa went to California is uncertain, though there are copies of his 1891 military benefits filing, from California, and an 1888 Sutter County California (Yuba City) voter registration sheet, listing Luther Ashley.

Luther Ashley came from a family of means, evidenced by his move to California, the scale of the California Mining operation, the Rolls Royce in the photograph and the quality of his guns… Two photographs show the mining operation, Navajo Indians and much equipment. The earliest pictures are dated December 1916 and show the caravan going to the mine with kegs that are “not beer” and another with Indians in the background.

The back side of the picture showing the Indians is written “Caterpillar is the only animal we have found so far that will make the Navajo Indian get off the road they are road hogs / x Indian teamster beating at”. There is an x on the picture where we assume an Indian was beaten… (?) The pictures show life in California when it still was the frontier; they are personal, they document the journey and two are marked in hand, likely by Luther or Melissa.

Luther Ashley came to California with a Colt Model 1860 serial number 90812, Colt Model 1851 serial number 36584, A Colt .31 Caliber Percussion serial number 95018 which is beautifully engraved and a Colt House Pistol serial number 755. These were the firearms that were carried by Luther throughout his brief military Service (we understand it was specifically the 1860), his Journey westward and his days mining. His descendants also had some history with the mine and the guns…

The exact date is unknown, but ownership of the mines and firearms was transferred to Luther’s son, Lloyd. Lloyd continued to run the mine and was listed as a Miner on his 1957 Death Certificate. The death certificate lists the cause of death as “”Self inflicted gunshot wound – head” “in Mine tunnel” at “Granite Mine, Big Oak Flat, Tuolumne – Calif”. Lloyd was a veteran of the Army Air Corps, but was otherwise a dedicated miner. Included with the collection are pictures (or copies) of Lloyd, his Air Corps compass and the camera that much of these pictures were taken with.

Lloyd passed the mine and all the property to his son, Robert Ashley (Luther’s Grandson), and there are Quitclaim deeds and paperwork here listing both Robert and Lloyd Ashley. These are dated 1949, prior to Lloyd’s death. Robert apparently continued the mining operation, though nothing like his father and grandfather had. Robert’s Death Certificate lists his occupation as a Mover, apparently the first non-miner Ashley in three generations. Robert, or Bobby Ashley, left the mine and all the property associated to his ancestors to me (Consignor Name Hidden).

Bobby was my Mom’s final companion and I was his last caregiver. As much as I would like to continue the long history of mining at the California mines, which I now own, I cannot yet find the mines. I am liquidating the estate of mining equipment and all the personal belongings of the Ashley family, to generate the finds to find these mines and reestablish a claim. Perhaps someday I can carry on the legacy of the Ashley Family miner.

These items will be available for auction soon at Lock Stock and Barrel.

www.lsbauctions.com, The Best Place to Buy, Sell or Consign Firearms ~ We Turn Your Guns Into Cash