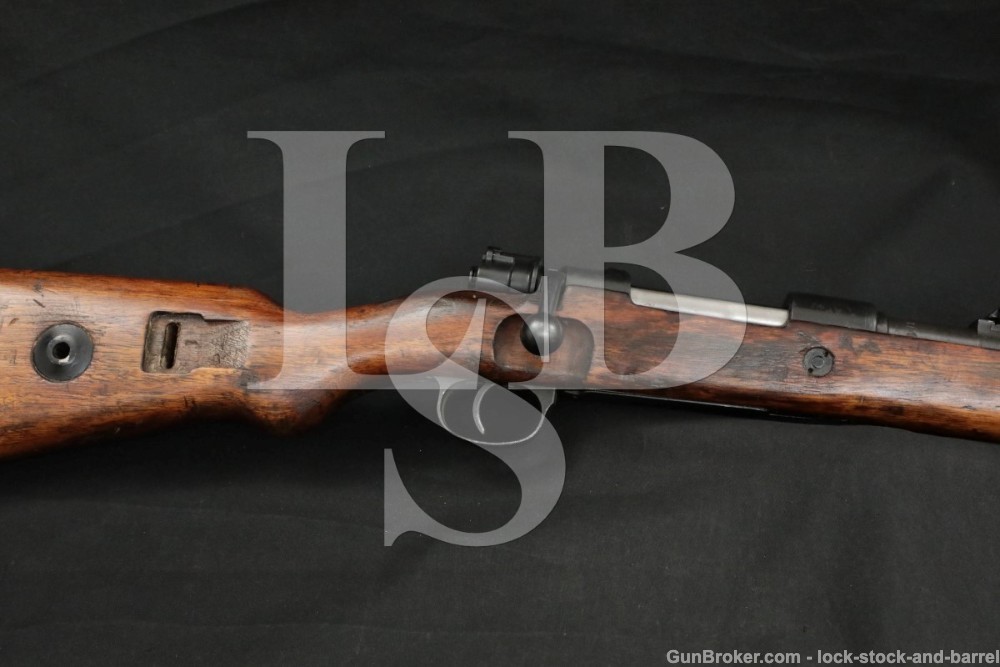 Make: Steyr, Austria. In 1943 “bnz” was the Nazi wartime code for (Steyr-Daimler-Puch AG).
This rifle was not built in the Steyr plant. It was built in an SS run Concentration Camp.

Sights / Optics: The front sight is an inverted “V” post set atop a ramped base. The rear sight is a “V” notched blade attached to a sliding sight escalator marked from “1-20”.

Stock Configuration & Condition: The hard wood stock has a pistol grip, nosecap, hole for the included cleaning rod, barrel band with sling bar, through bolt, scallop for the bolt handle, sling well, sling pass through, domed washer and a metal buttplate. The refinished buttplate has small scratches and surface erosion showing through the new finish. The wood shows numerous scrapes, scratches, and compression marks. Many of these marks have been oiled over. The LOP measures 13 ? inches from the front of the trigger to the back of the buttplate. The stock rates in about Good to Very Good condition as refinished.

Bore Condition: The grooves are dark and the rifling is deep. There is erosion present; mostly in the grooves.

Overall Condition: This rifle retains about 97% of its metal finish as refinished. Surface erosion and oxidation show through the new finish. The metal shows light scrapes & some small scratches. The screw heads show light use. The main markings are deep. Some of the smaller markings are faded. Overall, this rifle rates in about Very Good condition as refinished.

Mechanics: The action functions correctly. As with all used firearms, a thorough cleaning may be necessary to meet your maintenance requirements.

Our Assessment: This Single Rune Nazi marked German K98 Mauser was made by Steyr back in 1943 when Austria was part of the Third Reich. Single Rune K98 Rifles were built specifically for the SS. This K98 was not produced in the Steyr plant. Our reference material lists these rifles as “special production weapons assembled outside the Steyr plant”. This is a nice way of saying that the rifle was built in an SS run Concentration Camp.
The rifle has been rebuilt and refinished. It will make for an interesting addition to a Mauser or WWII collection.
For more info see pages 214 and 303-306 of Richard Law’s bok, Backbone of the Wehrmacht The German K98k Rifle 1934 -1945”.