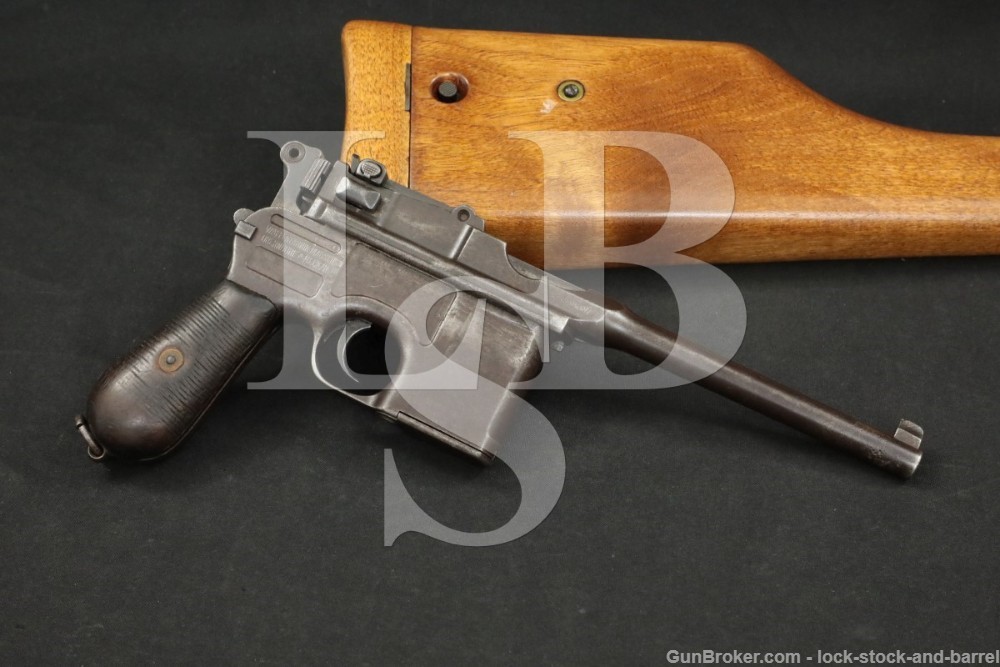 Finish Originality: We see no signs of refinishing. Some parts are not original to the frame.

Bore Condition: The bore is gray. The rifling is worn, but visible. There is light-moderate erosion scattered through the bore.

Overall Condition: This pistol retains about 0% of its current metal finish. The metal surfaces have gone to a fairly even patina. There is some scattered light erosion with some more notable pitting near the muzzle. There are some scattered light nicks, scuffs and scratches. The action shows operational wear. The screw head has erosion and the screw is seized in its escutcheons, but the slot is fairly strong. The markings are generally clear, some are worn or slightly obscured by erosion. Overall, this pistol is in about Fair-Good condition.

Mechanics: The action functions correctly when operated manually, but the recoil spring feels a little weak. The trigger is crisp. We did not fire this pistol. As with all used firearms, a thorough cleaning may be necessary to meet your maintenance standards

Box, Paperwork & Accessories: This pistol comes with a wood stock/holster. There are some gaps where the wood meets the metal brackets, and we suspect that this holster is a reproduction. A piece of the lid has broken off and been glued back in place and there are a few scattered light marks. Overall, the stock/holster is in about Good-plus condition as repaired.

Our Assessment: The Broomhandle Model 1896 Mauser is certainly an interesting looking firearm. Its features are the most distinctive of any other pistol. In addition to being popularized in Soviet films as the iconic weapon of the Russian revolution and civil war, it was even used as a basis for futuristic weapons like the blaster used by Han Solo in Star Wars. This pistol was made around 1914 and certainly looks as though it has “been there and done that”. With its import mark, it came to the United States sometime after 1968 and likely saw use outside Germany following the Great War. It has some serial matching parts and some replacements with erosion and wear consistent with heavy use over the last century. This could be a fun project to fix it back up into working order or will make a nice display piece as it is. Please see our photos and good luck!