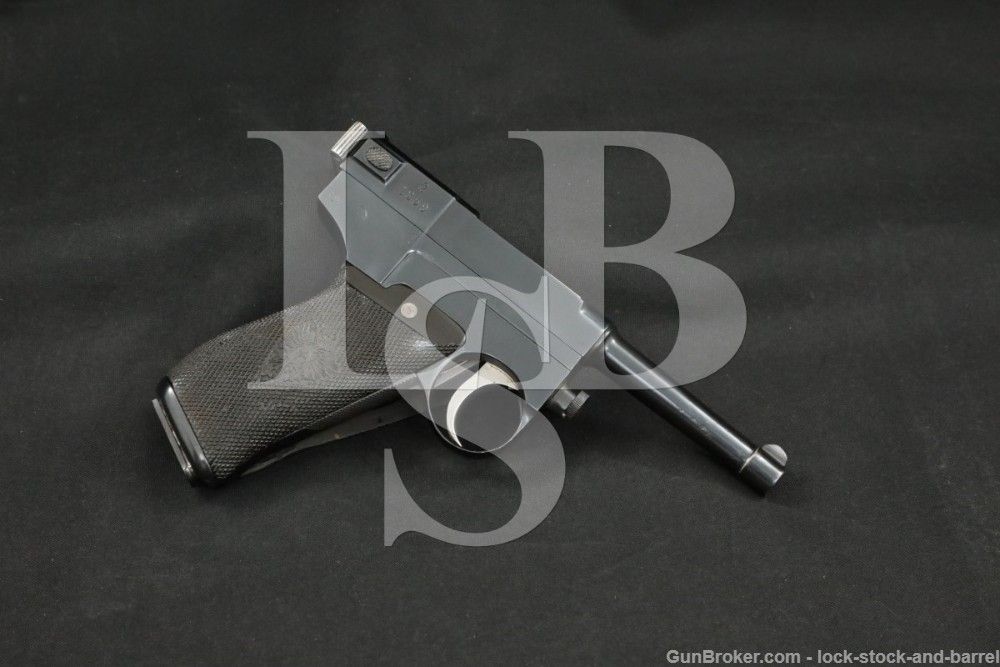 Caliber: 9mm Glisenti (Although the same size as a 9mm Parabellum, it uses a reduced charge. 9mm Para. rounds must NOT be used in this pistol.)

Sights / Optics: The front sight is a ramped blade fixed to a barrel band at the front of the barrel. The sight resembles an inverted “V” when viewed from the rear. The rear sight is “V” groove in a raised boss at the back of the receiver.

Stock Configuration & Condition: The grips are checkered ebonite with a large Savoy Crest in the center of the grips. The left panel is has a large chip missing from the heel and half the panel appears to have been patched. This panel is currently held to the grip frame with tape. There are several areas on both panels where the checkering is worn and in some spots is nicked away. The checkering is otherwise well-defined. Overall, the grips are in Poor-to-Fair condition.

Bore Condition: The bore is mostly dark with poorly defined rifling. There is light erosion scattered throughout the bore.

Mechanics: The action functions correctly. This pistol has a grip safety, but not a manual safety. We did not fire this handgun. As with all used firearms, a thorough cleaning may be necessary to meet your maintenance requirements.

Box, Paperwork & Accessories: This pistol comes with one eight round nickel plated magazine. The lower left side is marked with “TM” in an oval. The magazine is in Very Good-plus condition

Our Assessment: From Wikipedia: “The creation of a service pistol to supplant the Bodeo Model 1889 began to be rumored in late 1903. The pistol was designed by Italian inventor Bethel Abiel Revelli. Revelli spent multiple years developing a prototype before patenting his design to Societa Siderugica Glisenti of Turin. The Glisenti company acquired the machinery to begin production from the United Kingdom in 1906 but sold the manufacturing rights to Metallurgica Brescia gia Tempini. The Model 1906 pistol was designed to fire a 7.65x22mm bottle-neck cartridge, but this didn’t impress the Italian Army, who wanted a round similar to the 9mm Parabellum. The 9mm Glisenti cartridge was developed as a reduced loading of the 9mm Parabellum, firing a 123 grain bullet at about 1000 fps, short of what a 9mm Parabellum would do, but more powerful than a .380 ACP.”. This example is refinished and as such looks good overall. This pistol will serve as a fine introduction to WWI pistol collecting. Good luck and happy bidding!