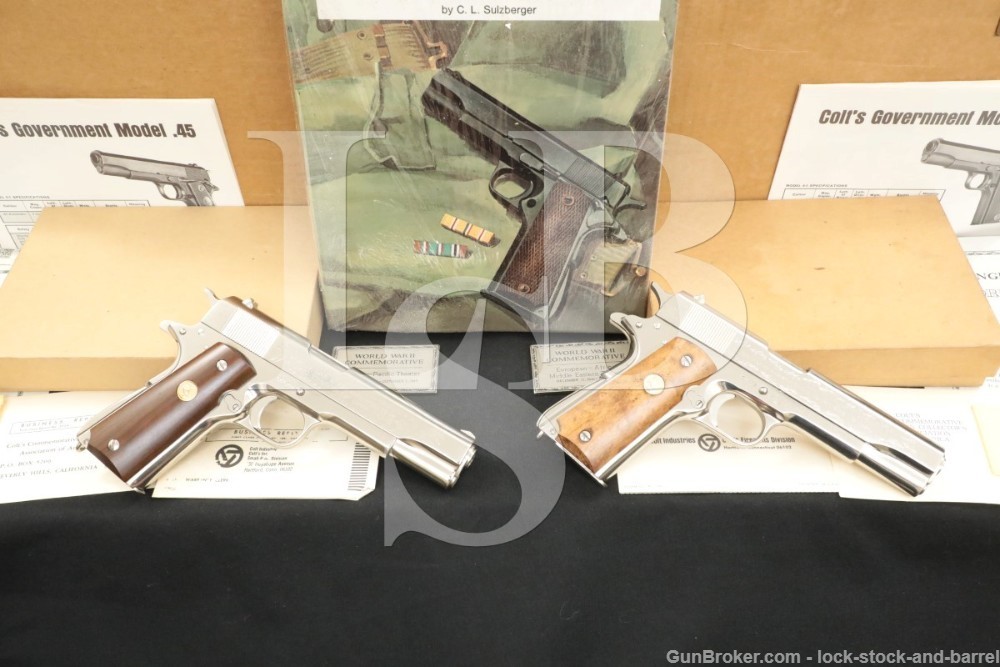 Markings: The Pistols each have their serial numbers marked on the right side of the frame. The ETO pistol has on the right side of its dust cover “COLT’S PT. F.A. MFG. CO. / HARTFORD, CONN. U.S.A.” with a rampant colt behind while this marking is on the left side of the dust cover for the PTO pistol. Each barrel is marked “COLT 45 AUTO” and with “VP” in triangle at the chamber.

Stock Configuration & Condition: The pistols have gold Colt medallions on each scale.

01: The grips are smooth walnut and have no visible wear or damage.

02: The grips are a smooth, blonde hardwood and have no visible wear or damage.

All of the grips are in Excellent condition.

Type of Finish: The pistols have a highly polished nickel finish.

Bore Condition: The bores are mostly bright and the rifling sharp. There is no erosion, but there is some green verdigris. These pistols do not appear to have been shot outside the factory.

Overall Condition: Both pistols retain about 99+% of their metal finish, and all have sharp grip screws with clear markings. Both have no visible wear or damage. Both rate in Excellent condition.

Mechanics: The actions function correctly. Each has grip and frame mounted safeties. We did not fire these pistols.

Box, Paperwork & Accessories: Each pistol comes with one finish-matching 7-round magazine in Excellent condition. Each pistol comes in a cardboard shipping carton with interior packing material. There is a styrofoam tray in each carton which holds their respective plaques, seven “silver bullets” and a two-piece cardboard box holding the pistols and keys for their display cases. Blow this is a separate cardboard carton holding each pistol’s hinge-top wooden presentation case with a plexiglass window over a felt-lined drawer which is fit for the pistols, the plaques and has a cartridge block for the silver bullets. The PTO box has space underneath this carton for the included book.  Each pistol comes with an assortment of factory paperwork including manual.

01: The case is made from bamboo or a very good imitation with bamboo-like bordering on the top and bamboo mat on the top face with a print on the inside of the lid of a picture of the Japanese surrender at Tokyo Bay, September 2, 1945 with a more extensive list of battles underneath. This pistol’s plaque reads “WORLD WAR II / COMMEMORATIVE / Asiatic – Pacific Theater / DECEMBER 7, 1941 – SEPTEMBER 2, 1945” bordered in oak leaves. The case has some dust inside the gray portion, but with no other notable damage. The case is in overall Fine-Excellent condition.

02: The case is made from oak with a print on the inside of the lid of a picture of the German surrender at Reims, May 7, 1945 with a more extensive list of battles underneath. This pistol’s plaque reads “WORLD WAR II / COMMEMORATIVE / European – African / Middle Eastern Theater / DECEMBER 11, 1941 – May 7, 1945” bordered in oak leaves. The print inside the lid has curled and come free from the lid. The tray has some brownish-red discoloration in the area fitted for the pistol and the case shows light storage wear. The case is in overall Good condition.

Also included is a copy of “Colt’s Commemorative Edition of The American Heritage Picture History of World War II” by C. L. Sulzberger. The book is in overall Excellent condition.

Our Assessment: These pistols are beautiful Colt 1911A1 pistols with high polish nickel finishes. The pistols are in Excellent condition and appear unused outside of the factory, with very minor handling marks. They commemorate the two major theaters of operation in WWII. The pistols come with wooden display cases. For the Colt 1911 collector, maybe even any WWII collector, there few rival commemorative sets. Not content with just the pistols and display cases, the original shipping cartons and packaging material are included with each, and the included book will make a great addition to their display as well as a wonderful and extensive resource about the contribution America made to World War II. These are an amazing tribute to the contribution America has made to keep the world free. Please take a look at our photos of these wonderful pistols and good luck!