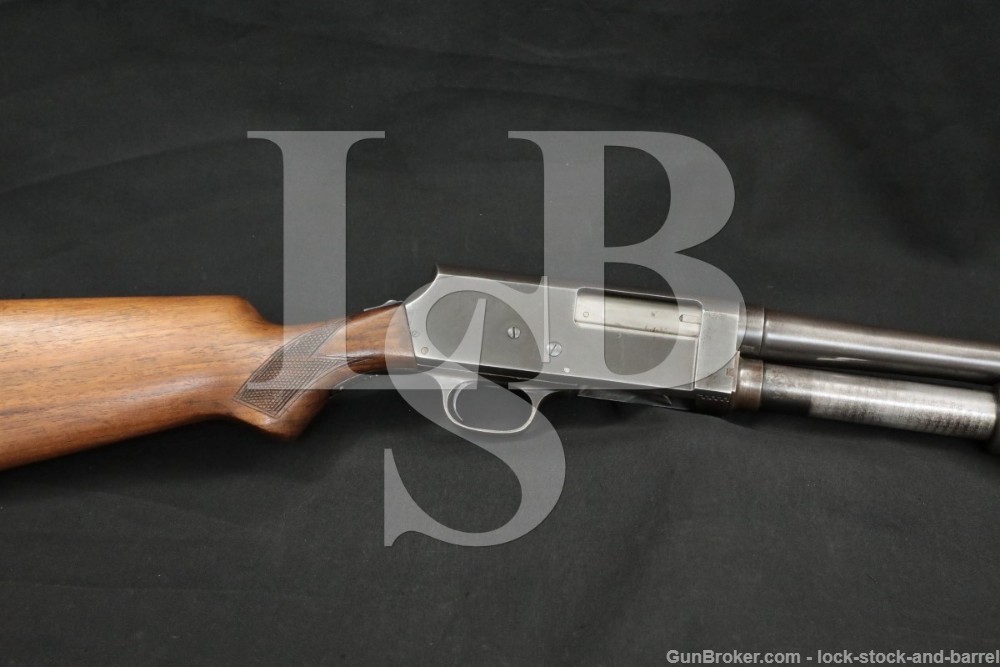 Sights / Optics: The shotgun is mounted with a small round bead at the front of the barrel, it appears to be a replacement.

Stock Configuration & Condition: The stocks are two-piece checkered wood with a pistol grip, straight comb, and a ventilated rubber recoil pad. There are some compressions and little dings on the forend, the marks through the finish have colored with age. The buttstock has cracks on the top, bottom, and right side of the wrist. The wrist is shy to the tangs and receiver. The buttstock has some scattered compressions, dings, and draglines, the majority have colored with age. The checkering is mostly strong. The LOP measures approximately 13 3/4” from the front of the trigger to the back of the recoil pad, which shows wear but remains soft. The LOP is 12 3/4” to the back of the wood. Overall, the stocks rate in about Very Good condition.

Bore Condition: The bore is bright with no erosion. There are some tool marks at the muzzle from when the front sight was replaced or the barrel was cut.

Overall Condition: This shotgun retains about 65% of its metal finish. The balance of the finish shows thinning and there is a light patina developing. There are some rubs and scuffs plus a couple of little nicks and light scratches, most noticeable on the receiver. There are some spots of discoloration from previous oxidation, most noticeable on the receiver at the front, bolt, and on the base of the magazine tube. There are some light handling and standard operational marks. The screw heads range from sharp to slightly disfigured and serviceable. The markings are clear. Overall, this shotgun rates in about Very Good condition.

Mechanics: The action functions correctly. We did not fire this shotgun. As with all used firearms, a thorough cleaning may be necessary to meet your maintenance requirements.

Our Assessment: The Stevens Model 520 was a pump-action shotgun developed by John Browning and originally manufactured by the J Stevens Arms & Tool Company between 1909 and 1916. Stevens was sold to New England Westinghouse on 28 May 1915 and production of civilian firearms was greatly reduced. The company was renamed the “J Stevens Arms Company” on 1 July 1916 and New England Westinghouse used their manufacturing facility in Chicopee Falls, MA to produce Mosin-Nagant rifles under contract for the Russian Czar during World War I. After the war, Stevens was sold to Savage Arms on 1 April 1920 and full production of civilian firearms resumed. Under Savage ownership, Model 520 production continued until 1939. The military model was designated the 520-30 and was made in trench, riot, and aerial training configurations. After WWII the model was standardized and saw use through Korea into the Vietnam War and was used by law enforcement after its military service. This example has some scattered cosmetic wear, it rates in about Very Good condition and functions smoothly. Please see our photos and good luck!