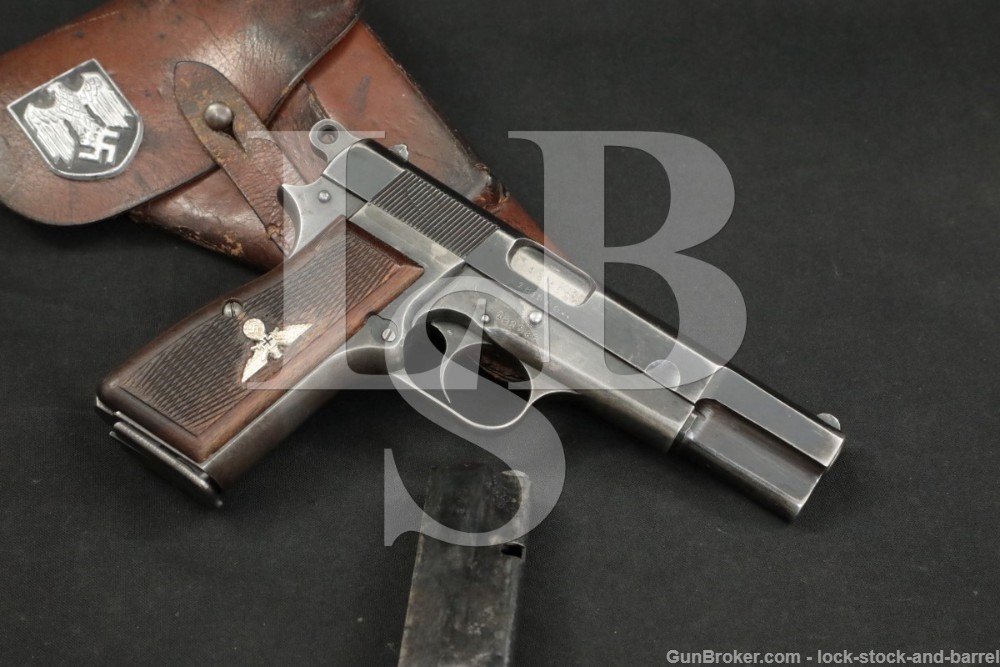 Stock Configuration & Condition: The grips are two-piece checkered wood panels. A medallion of an eagle over a swastika behind two crossed swords and a black iron cross has been custom installed onto the right panel. There is a crack in the upper rear of the right panel. The left panel has a scratch in the checkering. There is discoloration on both panels from age and handling. Overall, the grips are in about Fair-Good condition as modified .

Bore Condition: The bore is mostly bright with scattered light erosion and the rifling is sharp.

Overall Condition: This pistol retains about 75% of its current metal finish. The finish is thinning and finish loss on some edges, more notable at corners. There are some infrequently scattered little marks into the finish and light scuffs. There is some light erosion present on the front and back strap. The action shows standard operational wear. The screw heads are tool marked with strong slots. The markings are generally clear, some are shallow with soft edges. Overall, this pistol is in about Very Good condition.

Mechanics: The action functions correctly. The magazine disconnect is present. The trigger is crisp. The slide has light play to the frame. We have not fired this pistol. As with all used firearms, a thorough cleaning may be necessary to meet your maintenance standards.

Box, Paperwork & Accessories: This pistol comes with a flap holster and a pair of 13-round magazines. The interior of the flap is hand scribed “Briggs / 31147770”. The holster is marked with an eagle holding a swastika over a waffenamt number that can’t be made out and “dla / 43” under the leather strap. A large medallion of an eagle holding a swastika on a shield has been nail-fastened on the outside of the top flap. The holster has some scattered spots of discoloration, scuffs, and creases. There is a small tear in the belt loop. The stitching is intact and the holster rates in about Good condition. One of the magazines shows light operational thinning with a couple light dents and rates in about Good-Plus condition. The other magazine has scattered pitting, dents along the edges, and scattered finish loss, rating in about Fair-Good condition.

Our Assessment: The Browning High Power pistol is based on a design by American firearms inventor John Browning, and completed by Dieudonné Saive at Fabrique Nationale. Browning died in 1926, several years before the design was finalized. The Hi-Power is one of the most widely utilized military pistols in history, having been used by the armed forces of over 50 countries. The Hi Power name didn’t refer to the cartridge, but to its 13 round magazine, holding five more than the Luger and six more than the Colt 1911. Its magazine capacity and ergonomic grip frame have made it a favorite among civilian shooters as a carry pistol and for home defense. The High Power was adopted by the Belgian military and the early pistols were equipped with a tangent rear sight and a grip that was slotted for a wooden stock. When Germany invaded Belgium, they took over the FN plant and continued making the High Power, but soon dropped the grooved grip after stocks of pre-invasion parts were used-up. Guns made with tangent sights included WaA613, WaA103 and WaA140 inspection marks before the tangent sights were replaced with fixed sights to help increase production. This pistol was made between 1942 and 1943 in the WaA140 inspection mark range after the tangent sights had been dropped in favor of fixed sights. The pistol has matching serial numbers on the barrel, slide, and frame. The bore has sharp rifling and minor erosion. Someone somewhere along the way decided to get creative, adding additional Nazi apparel to the right grip panel and holster flap If you want to fire this pistol, be sure to have it inspected by a qualified gunsmith. According to Anthony Vanderlinden in his book “FN Browning Pistols”, sabotage performed by the workers in the FN factory increased proportionally with the portion which was forced labor. This was most prevalent in the WaA140 inspection range and some pistols are not safe to fire due to having poor heat treat or being out of tolerance standards. Please see our photos and good luck!