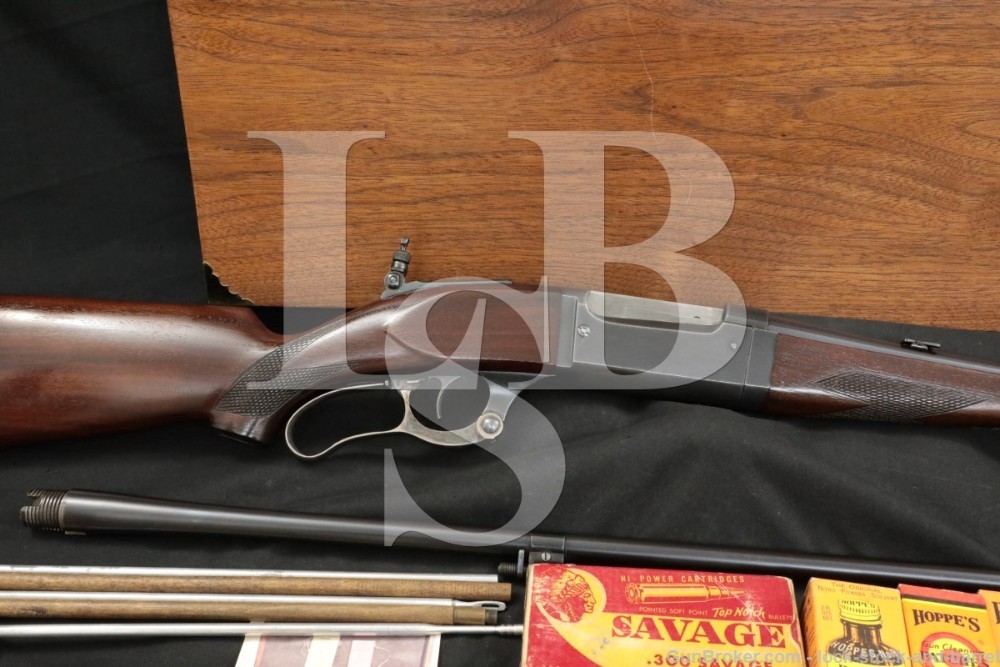 Year of Manufacture: 1922, First Year of Production for this Sub-Model

Sights / Optics: The front sight is a beaded blade pinned into a slotted base that is machined into the barrel. The rear sight is a two-position flip-up sight dovetailed into the barrel. One of the leaf is completely flat with no notch and has a white triangle aiming reference. The second leaf is a deep “V” notch. The top of the tang is installed with a Lyman flip up aperture peep sight.

Stock Configuration & Condition: The stocks are checkered walnut with a capped pistol grip, straight comb, Schnabel tip forend, and serrated steel buttplate. There are some light marks from handling and use. There is a compression mark on the font of the forend from the second barrel mount. There is a small crack on the bottom of the wrist at the rear of the tang. There is a compression on the comb. The checkering is strong. The LOP is approximately 13” from the front of the trigger to the back of the buttplate The plate has some mottled patina and finish loss with a few little dings. The stocks rate in about Very Good-Fine condition.

Bore Condition: The bore is mostly bright with sharp rifling. There are a couple of freckles of faint surface erosion.

Overall Condition: This rifle retains about 95% of its metal finish. There is some thinning on the edges. The bottom of the receiver has some scuffs that have thinned the finish. There are a few spots of dark discoloration from previous oxidation on the receiver. There are a few little scuffs on the barrel that have thinned the finish, most noticeable on the top of the chamber. There are some little marks into the finish on the barrel, most noticeable towards the front. There are a couple of tiny spots of very light surface oxidation on the barrel. The screwheads are sharp. The markings are clear. Overall, this rifle rates in about Fine condition.

Mechanics: The included .410 barrel is screwed into the receiver and the forend is held on with a bolt and screw mounted to the barrel with a clamp, this is factory. The .410 barrel is designed to convert the action to single shot, shotshells are too bulky for the rotary magazine. The action functions correctly. We did not fire this rifle. As with all used firearms, a thorough cleaning may be necessary to meet your maintenance requirements.

Box, Paperwork & Accessories: Included is a fitted wood case with cleaning rods, Hoppes grease, a Hoppes bottle, patches, Savage ammo, and most importantly a .410 Bore barrel! The case has some light scratches and marks on the exterior and the burgundy felt interior has light wear. The case rates in about Fine condition. The ammo is sealed and is collectible so we did not open it to count rounds or check the condition. The barrel is 24” and has a blued finish and brass bead front sight. The barrel is marked “MANUFACTURED BY THE SAVAGE ARMS CORP., UTICA, N.Y. U.S.A. / JULY 25. 1893, OCT. 3, 1899. SEP. 10. 1907. MAY. 25. 1909. JUNE. 1. 1909.” on top and “410” on the left of the chamber. The barrel has about 95% of its metal finish with some scattered little marks into the finish and some scuffs that have thinned the finish. The most noticeable wear is on the top towards the front. The bore is bright and there is no erosion. The choke is Fixed Full. It rates in about Fine condition.

Our Assessment: The Savage 1899/99 model rifles have quite a history. They were preceded by the Model 1895, which was the first hammerless lever-action rifle produced. A hammerless action was useful as it reduces the lock time, allows the rifle to be fired more accurately and is less likely to jam in brush or snag in clothing. The 1895 and 1899/99 models used a rotary magazine to hold the cartridges, using a spring-loaded spool with grooves. The 1899/99 models added a counter to the spool to indicate how many rounds are loaded. This design allowed the use of spitzer bullets, which could not be used in the Winchester rifles of the times because the pointed tips in the tubular magazines could cause accidental discharge. This gave Savage a lead in producing rifles that could handle high velocity smokeless powder cartridges with bullets offering flatter trajectories than other lever-action designs. This one is marked 1899 on the chamber ring but is a model 99-G, from 1922, the first year of production for that sub-model. In the late 1910s and early 1920s Savage changed the name in the catalogs to Model 99 but continued marking the receivers 1899. This one comes with a .410 barrel which we rarely see. The barrel converts the rifle to a single shot shorgun and holds the forend in place with a clamp mounted bolt and screw on the barrel. This is an impressive setup in great condition not too often encountered and will be a great addition to your collection. Please see our photos and good luck!