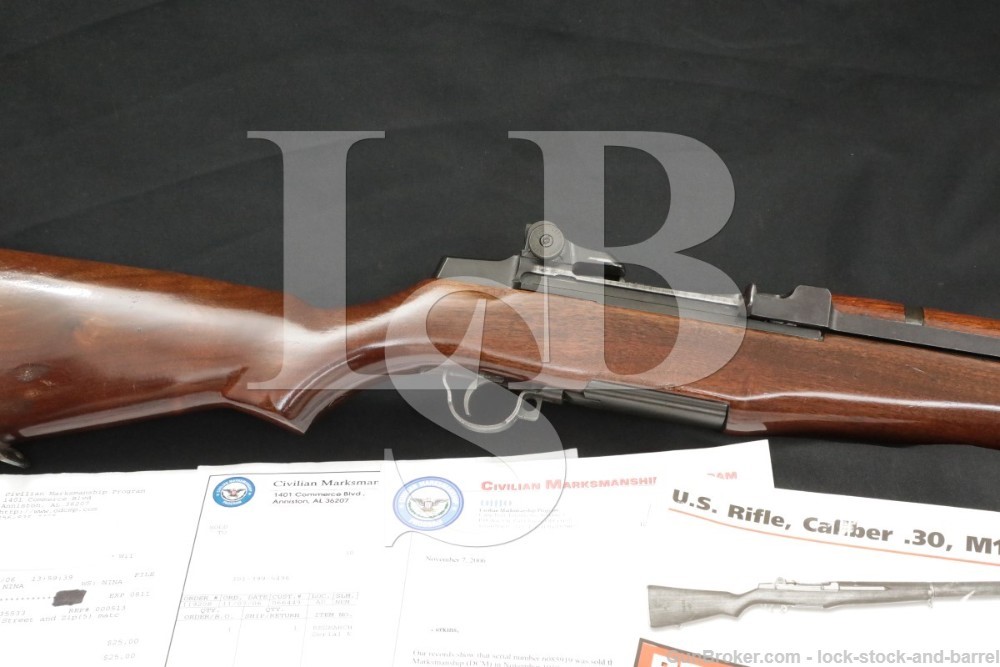 Stock Configuration & Condition: The left side of the stock, above the trigger, is marked with a Defense “eagle” acceptance stamp. The face of the grip is marked with a “circled P” proof.
The gloss finished hardwood stock has a pistol grip, metal nose caps, stacking loop, two sling loops and a metal buttplate with hinged door for storage in the butt. The buttplate shows scrapes, small scratches and discoloration from oxidation. The wood shows several scrapes & scratches. Many have damaged small portions of the gloss finish. The LOP measures 13 ? inches from the front of the trigger to the back of the buttplate. The stock rates in about Very Good Plus overall condition as refinished.

Overall Condition: This rifle retains about 94% of its metal finish as refinished.  The metal shows scuffs & light scrapes. The gas tube shows scrapes & scratches. The top rear of the receiver shows a few scrapes. The right side of the receiver and front of the bolt show thinning from cycling. The front sight shows some surface erosion. The markings are deep. Overall, this rifle rates in about Very Good Plus to Fine condition as refinished.

Our Assessment: This M1 Garand National Match Rifle was originally made sometime between 1955 and 1957. In 1958 it was sold by the Director of Civilian Marksmanship (DCM) as an M1 Garand NM Rifle. We do not know if it was originally built as an NM Rifle or if it was Arsenal Rebuilt as an NM Rifle. Due to its date of manufacture it was most likely an “original NM build” as most NM Rifles in this date range were New Production NM Rifles (page 205 of Joe Poyer’s M1 GARAND 1936 to 1957, 6th Edition).
The DCM later became the Civilian Marksmanship Program (CMP). Research paperwork from the CMP verifies the sale and is included in the auction.
In 1958 the only National Match markings on the rifle would have been the “NM” stamping on the left side of the barrel (pages 546 to 550 Of Bruce Canfield’s Book, The M1 Garand Rifle). This M1 Garand has had National Match sights and a National Match operating rod installed to bring it up to later National Match standards. The metal and stock have been refinished. This is a sharp looking, Rare National Match M1 Garand to add to your collection.