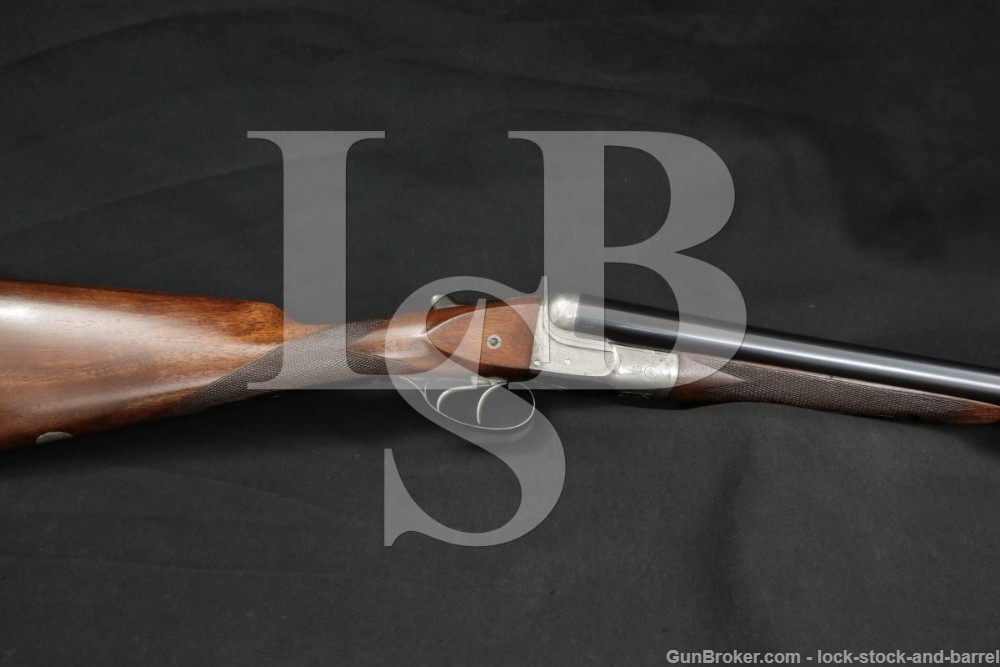 Action Type: Side by Side, Hammerless, Box-Lock, Dual Non-Selective Trigger Shotgun with Ejectors

Markings: The top of the rib is marked “W.W. GREENER. MAKER. 68, HAYMARKET. LONDON. WORKS. ST. MARY’S SQUARE. BIRMINGHAM.”. The top of the forend bracket is marked “64689”. The underside of each barrel is marked with British proof marks, the Greener elephant trade mark and “64689”. Each barrel flat has a series of British proof marks. The water table has British proof marks, “64689”, the elephant trade mark and is import marked “SIMPSON LTD G’BURG IL”. The water table’s serial marking has the “8” stamped over a “4”. Given how close the number is and that all other parts are matching, we suspect this is a factory error. The standing breech is marked “W.W.G. / ENGLAND”. Each side of the receiver is marked “W.W. GREENER”. The bottom tang is marked “64689” and “GRADE F.H.25”. The initial plate in the belly is marked “ARB”. The receiver, trigger plate, guard and lever have scroll engraving with motif on the exposed portion of the forend iron, the latch assembly, and the rear of the barrel set.

Sights / Optics: There is a bead mounted to the front of the solid, concave rib.

Stock Configuration & Condition: The stocks are two-piece checkered walnut with ebony tip on its splinter forend, straight grip, straight comb, initial plate inlaid to the belly and checkered hard rubber buttplate. The stocks have light handling wear in the grip areas and some scattered light nicks, scuffs and scratches. There is a short, thin crack at the top-left edge of the forend just behind the ebony tip and a small loss at the top-rear corner of the forend on the left. The checkering is well defined. Drop at comb is 1 ½”, drop at heel is 2 1/8”. The stock is slightly cast-off for right handed shooters. The LOP measures 13 1/2” from the front of the rear trigger and 14 3/8” from the front of the forward trigger to the back of the buttplate. The plate has light wear, mostly at the heel and toe with well defined checkering. The stocks rate in about Very Good-plus overall condition.

Overall Condition: This shotgun retains about 85% of its metal finish. The barrels have generally strong finish with some light handling wear over the forend and a few light nicks and scratches. The receiver has mostly worn to white with infrequent minor surface oxidation. The guard has light handling wear. The screw heads range from sharp to lightly tool marked with strong slots. The markings are clear. Overall, this shotgun rates in about Very Good-Fine condition.

Mechanics: The action functions correctly, including ejectors. The barrels lock up with no play to the receiver. The safety is mounted in the left of the wrist behind the receiver. We have not fired this shotgun. As with all used firearms, a thorough cleaning may be necessary to meet your maintenance standards.

Our Assessment: This shotgun was made by the famed British gunmakers at W.W. Greener. The Greener history of gunmaking goes back to the early 19th century, with William Greener learning his trade under names such as John Gardner and John Manton. Greener began his own company in Newcastle in the 1830s, moving to Birmingham in 1844. The company still operates out of Stafford, just outside Birmingham, today. This example is an FH 25 grade hammerless boxlock gun made in 1914. This was an inauspicious time for most European gunmakers as the advent of total war between the major European powers began. W.W. Greener produced 1801 hand-made guns in both 1912 and 1913, this number dropping to 763 in 1914 when this gun was made, only 22 followed in 1915, 244 in 1916, and none for the last two years of the Great War. This gun appears to have survived the last century quite well, showing light wear, great bores and strong mechanics. This will certainly interest collectors of fine European firearms, but should also still prove to be a great bird gun. Please see our photos and good luck!