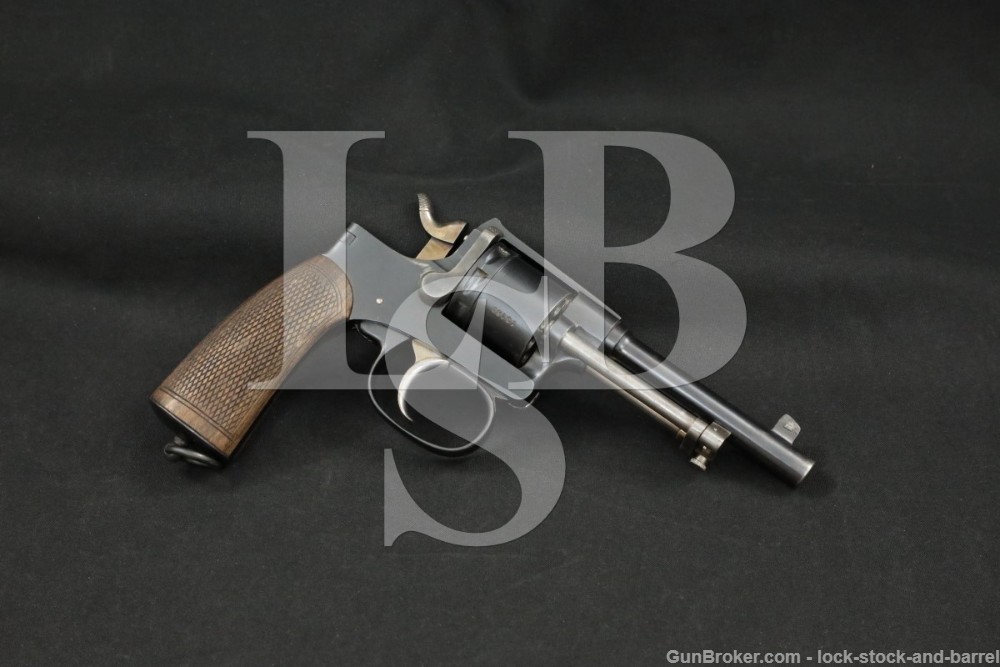 Stock Configuration & Condition: The grips are two-piece checkered wood. There is a stud with a lanyard ring attached in the middle of the grip cap. There are light handling marks and both panels show scattered light dings. Checkering is well-defined. There are no chips or cracks. Overall, the grips rate in Very Good-plus condition.

Bore Condition: The bore is bright and the rifling is well-defined. There is no erosion.

Overall Condition: This revolver retains about 87% of its metal finish. The barrel shows holster wear at the muzzle that resolves to light finish loss. There is a patch of light surface oxidation on the left side of the barrel. The barrel and frame shows scattered light nicks and a few scuffs. The cylinder shows a turn line through the finishes as well as a few spots of light surface oxidation. Screws show light tool marks with strong slots, and markings are fairly clear. Overall, this revolver rates in Very Good condition.

Mechanics: The action functions correctly. The double action is smooth and the single action is light and crisp. The cylinder locks up with minor play at each stop. We did not fire this revolver. As with all used firearms, a thorough cleaning may be necessary to meet your maintenance standards.

Our Assessment: Intended for wide adoption by the Austrian-Hungarian army in the period before World War I, the Rast & Gasser 1898 ultimately made its way only to NCO’s and gunner’s as a secondary weapon due to slower-than-desirable production at the time. It did see use through World War II, however. This particular example is from fairly early in the production of these revolvers and is in Very Good condition with most of its original finish it has a clean bore and tight lockup. Good luck and happy bidding!