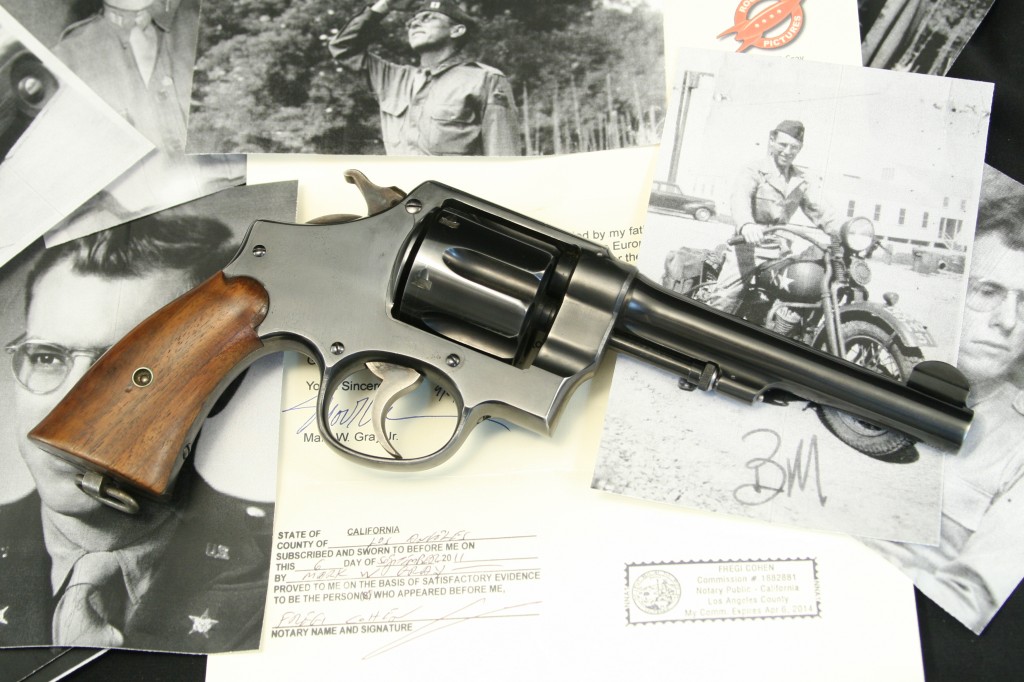 Sights / Optics:  The gun is mounted with a blade front sight and a notch in the frame rear sight.
Stock Configuration & Condition:  The stock(s) is/are plain wood walnut in good serviceable condition. There is a small chip missing from the left grip at the toe and a compression mark on the left grip about  1″ up. These both look like old marks.  The bottom edges of the grips are slightly damaged but as expected for a military firearm.

Bore Condition:  The rifling is sharp and deep. The bore is bright with little evidence of firing.. There is no apparent erosion.

Overall Condition:  This gun retains about 90% of its metal finish. The balance of the finish shows edge wear at the muzzle probably from holster carry, and some  chambers of the cylinder have a few sharp nicks likely also from holster carry, and there are slight nicks to the top strap and a visible drag line. The firewall is still mostly blue, showing little firing. The chambers are sharp at the ACP shelf also indicating little firing and there is no telltale ring on the front face of the cylinder chambers. The grip strap shows some wear at the top and bottom. The case colors are sharp on the hammer and trigger. There is just the beginning of pinprick erosion on the left and right side of the frame ahead of the grips. This is certainly one of the highest condition 1917’s we have seen. The Screw heads are sharp and undamaged. The markings are clear. Overall, this gun rates in about excellent condition.

Mechanics:  The action functions correctly both single and double action. The lockup is tight..

Box & Accessories:  The notarized letter from the consigner stating the story told below, and nine printed digital pictures of Captain Gray who brought this gun back are included. (the digital pictures will be emailed to the winning bidder)

Our Assessment:  Collectors try their whole careers to obtain a Military Revolver in this condition with a story. This is the rarest of the rare, condition and story preserved for all time. Captain Gray was in France with the 12 th Armored Division after Normandy and traded a Luger he obtained as a war trophy to complete the outfit for a defector who was going to be placed back behind enemy lines as a spy for this S & W 1917.This story is documented  in a signed  and notarized letter from Mark Gray, Captain Gray’s son. This is a once in a lifetime opportunity to obtain this gun for your collection. Don’t let  it pass you by.