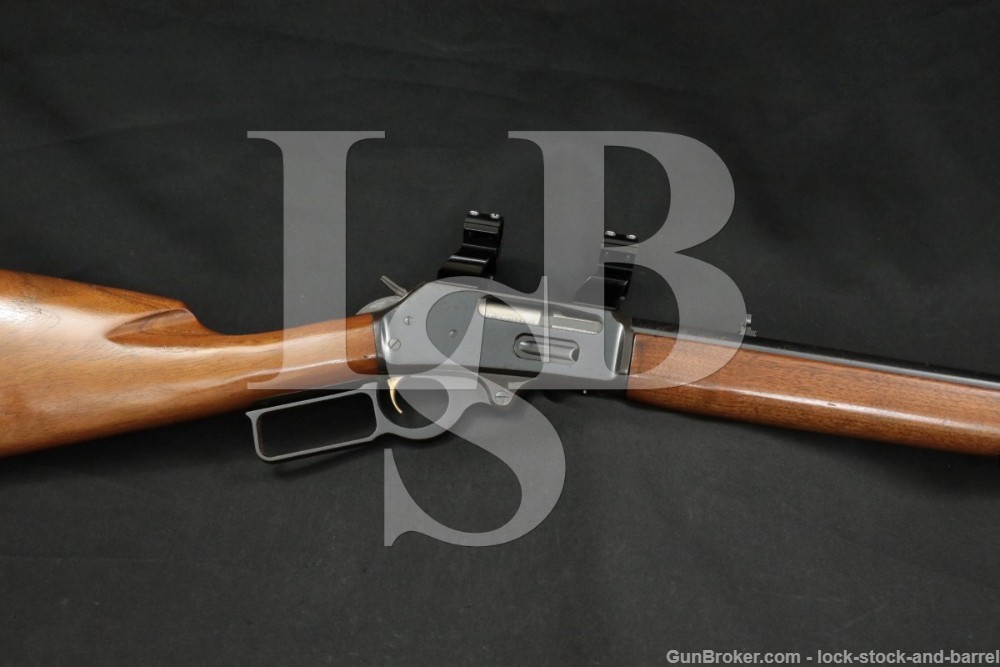 Sights / Optics: This rifle is mounted with a “U” notch folding rear sight with a white-triangle aiming reference point on the notched plate which can be adjusted for elevation which is dovetailed to the rear of the barrel. The front sight is a brass beaded blade which is dovetailed to the front of the barrel. The top of the receiver is installed with two quick site rings.

Stock Configuration & Condition: The stocks are two-piece smooth walnut with a straight grip, fluted monte carlo comb, and a brown vent-rubber Marlin buttpad. There is one barrel band that secures the forend, the band has a sling stud and there is another in the belly. There is a Marlin bullseye in the belly as well. There are some light compressions and scrapes most notably on the buttstock. There are no chips or cracks. The LOP measures 13 1/2” from the front of the trigger to the back of the recoil pad. The recoil pad shows light wear and has remained pliable. The stocks rate in about Very Good-Fine overall condition.

Bore Condition: The bore is bright and the Micro-Groove rifling is well defined. There are scattered tiny pinpricks of erosion in some of the grooves.

Overall Condition: This rifle retains about 83% of its metal finish. The receiver has scattered surface oxidation, most notably on the top. There is scattered oxidation on the barrel, mostly at the rear and on the lever as well. The mag tube band has taken a plum hue. There are scattered little nicks and scratches throughout the metal. The screw heads are sharp though some have oxidation but are plenty serviceable. The markings are crisp. Overall, this rifle rates in about Very Good overall condition.

Mechanics: The action functions correctly. The lever locks up well and the hammer has a half-cock safety position in addition to a lever safety. We did not fire this rifle. As with all used firearms, a thorough cleaning may be necessary to meet your maintenance standards.

Our Assessment: Created in 1964 as a joint venture between Marlin and Remington, the .444 Marlin cartridge was developed to fill the space left after .45-70 lost popularity in the United States. Able to push a 240 grain projectile at 2,400 FPS, the cartridge can be used for even the largest game North America has to offer. It has an advantage over the .45-70 in that it was designed for use with smokeless powder, not for black powder. After the cartridge was completed, the Model 444 was released in 1965 and is just like a 336 with strength upgrades to handle the potent round.. This rifle would be great for hunting or for a Marlin collection which doesn’t yet have a .444. The rifle is in about Very Good condition with strong mechanics and a nice bore. A good amount of the oxidation is only on the surface and would likely clean off fairly easily.  Please see our photos and good luck!