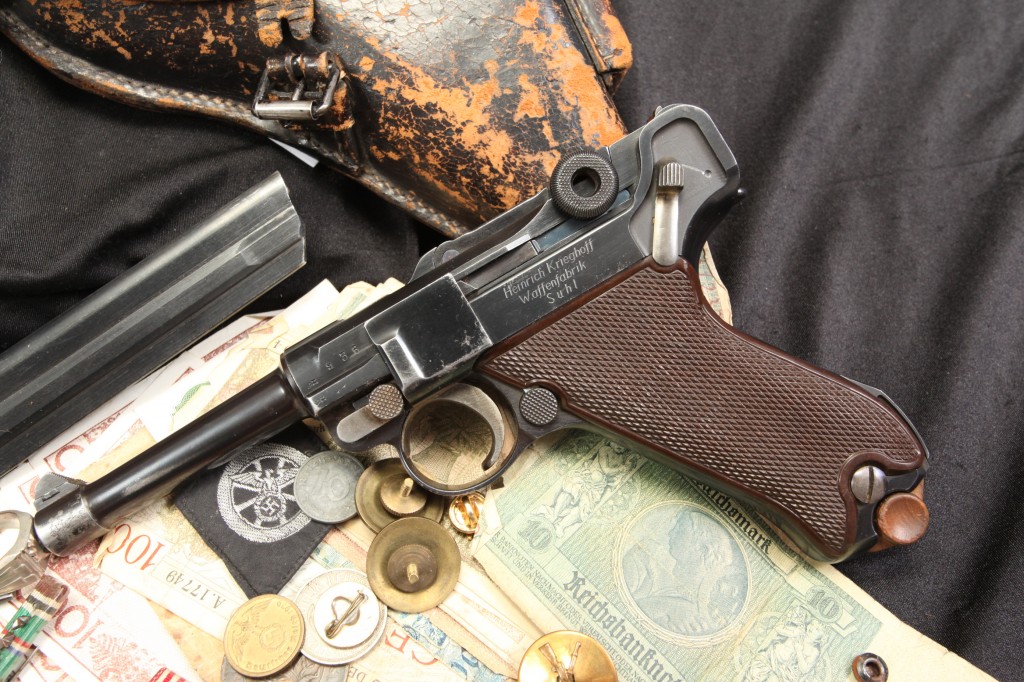 Year of Manufacture: circa 1934

Sights / Optics: This pistol is mounted with a notch in the back of the toggle and a serrated ramp front sight in a dovetail.

Stock Configuration & Condition: The grips are checkered reddish brown plastic. The checkering feels sharp, but there is very light wear on the right grip with slightly heavier wear on the left grip. Both show light handling marks on the un-checkered edges. There are neither cracks nor chips. The grips rate in about Excellent overall condition.

Bore Condition: The bore is bright and the rifling is deep. There is no erosion.

Overall Condition: This pistol retains about 75% of its metal finish. The front barrel band shows surface loss and pinprick surface erosion on both sides. The rest of the barrel shows surface loss on the left side and light handling marks. The left side plate and the front edges of the frame show surface loss. The knurling of the takedown lever shows light wear on the bottom edge and the grooves have developed a brown patina. The serrations on the toggle knobs show thinning and the edges of the front toggle and trigger guard also show thinning. The bottom of the front strap shows wear and the lower half of the backstrap shows thinning. The grip screws show surface loss but are not disfigured. The markings are clear except for those on the breechblock. Overall, this pistol rates in about Very Good condition.

Box, Paperwork & Accessories: This pistol comes with two magazines, a period correct black leather flap holster with takedown tool and a host of memorabilia, described below:

A Notarized Letter from Leonard John Crofoot, son of the original US soldier that returned with this pistol. The letter reads as follows: “Leonard Vernon Crofoot, my father, passed away on September 17, 2002. He left behind a Krieghoff Luger, serial number P936, which he returned with from the war in Europe. This pistol has been a war trophy for my father and a reminder of our family’s history since its return. I’ve known about my Dad’s Luger since I was a little boy. He used to keep it under his bed, taking it out when we went on our yearly vacation where he’d keep it under the driver’s seat. He always kept it close at hand.

My father rarely spoke of the war when we were growing up, but later in life he began to talk about his experience. Early in my life, he mentioned that he had taken the gun off a high-ranking officer during the war, but did not elaborate beyond that. Some years later I pressed him for more information about the officer and my Dad’s only response was “I shot the Kraut, took his gun and I’m glad I did ‘cause he killed one of my buddies.”

Eventually my father confided some of his war stories to me and they were bloody and horrific. It was shocking as my Dad was a quiet and kind man.

My father never imagined or planned on selling this prized pistol, nor did any of his descendants. That being said, we as a family are selling the Luger to assist my aging mother with escalating living expenses. I am confident my father would approve of his prize being used in such a way, especially knowing it will be owned by a collector who will cherish it and the rich history.

This collection includes my Dad’s captured Luger and holster, his 1943 507th Parachute Infantry Book complete with group pictures of the entire 507th, his ribbons, buttons, papers, his uniform, WWII era currency, Paratrooper pins, medals and other items (including some Nazi paraphernalia) as photographed and included in the auction with the pistol.

I will be sorry to see my Dad’s Luger leave the family’s possession. My hope is that they will find a home where they will be appreciated as they have been here.”

– An original 1943 507th Parachute Infantry Yearbook. The book is complete and sound, though the cover at the binding is separating. A photo of Leonard Vernon Crofoot can be seen on page 49.

– The original Purple Heart Medal and Pin in the original case. Both rate in fine overall condition.
– Original copies of Leonard Vernon Crofoot’s Discharge Paperwork, with the pocket copies and protector.

– A Large lot WWII Era and Earlier (1920’s) Foreign Currency from: France, Germany, Canada, England and Austria. there are a total of about 45 pieces. There is also a collection of 14 foreign coins, (3 Nazi) photographed.

Our Assessment: This 1934 Commercial Krieghoff is a rare find which is sure to interest Luger collectors, airborne collectors and WWII collectors. It has matching numbers and comes directly from the estate of a decorated 82nd Airborne soldier and veteran of Normandy and Bastogne. We sell a lot of Bringback guns, but this one is noteworthy with the ensemble being so complete, with the Luger being a Krieghoff and the soldier being so experienced in noteworthy battles.

CA Legal or CA Private Party Transferable: This C&R pistol can be transferred in California and can be sold to a California resident as a private party transaction (PPT) at our shop in Simi Valley. This does not apply to out of state buyers.