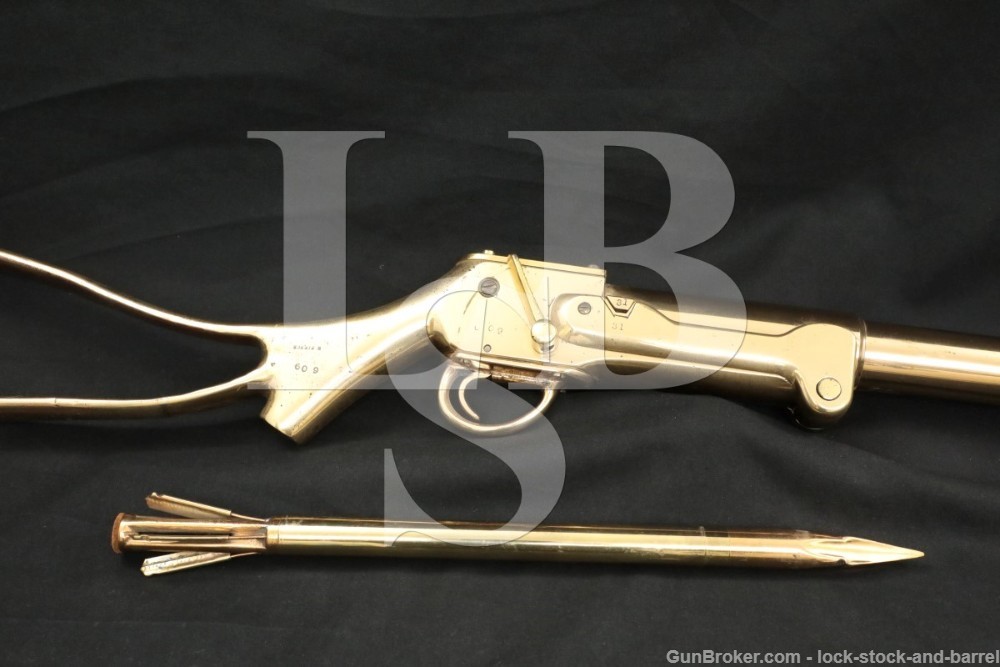 Caliber: This gun fires either a Pierce or Brand bomb-lance or explosive-lance using an 8-gauge blank shell.

Sights / Optics: This gun is mounted with a ring at the muzzle which has a three-pronged front sight on top.

Stock Configuration & Condition: The stock is a skeletonized frame integral to the receiver with a pistol grip and a round hole on the bottom of the grip for a mount (for use mounting on a ship railing).

Bore Condition: The bore is dark with fouling. There appears to be some light tarnish in the bore.

Overall Condition: This gun retains about 87% of its metal finish. There is light tarnish at edges and corners with scattered compressions and spots of discoloration from age and handling. The markings are generally clear, one of the “609” markings on the frame is shallow and incomplete. Overall, this whale-gun is in about Very Good-plus condition.

Mechanics: The action functions correctly, however the hammer does not fall with much force. The right lever cocks the gun, the left lever opens the action. We have did not fire this whale-gun. As with all used firearms, a thorough cleaning may be necessary to meet your maintenance standards.

Box, Paperwork & Accessories: Included is one bronze/gunmetal Pierce bomb-lance (deactivated). The lance has spring-loaded fins which snap out upon leaving the barrel to help stabilize its flight. The lance exhibits light tarnish with some light damage to the thin metal fins, though they still function. Overall, the lance is in about Very Good condition as deactivated.

Our Assessment: For centuries, killing whales was a very dangerous business. Once you got a line into the whale, your vessel was at its mercy until you could draw yourselves alongside the animal and spear it, leaving the whale lots of time to take you on a wild and perilous ride. Therefore, a solution was sought which would allow the animal to be dispatched from a distance, leading to the production of the explosive harpoon, also known as a bomb-lance. Shoulder-fired whale-guns were soon developed and one of the best was made by Frank Brown for his uncle, Ebenezer Pierce who patented its design with his partner Selmar Eggars. James Templeman Brown, an assistant in the Department of Arts and Industries of the United States National Museum, while preparing for a Fishing exhibit wrote: “… one of the latest improved shoulder-guns, and the most popular and effective that has ever been introduced in the whale fishery. It may be used with either the Pierce or Brand explosive lance. It is also one of the most attractive whaling guns in appearance. It is made entirely of gun metal, with a skeleton stock and reinforced barrel. Charge, 2-1/2 drams of powder.” The lance would be loaded, typically from the muzzle end with a ring on the fins to keep them pressed into the body of the lance, then an 8-gauge blank shell would be loaded in the breech. Firing the blank would expel the lance and light its fuse. The lance would, hopefully, strike the whale and then explode, incapacitating it. This is a great little piece of maritime history and would make a fine decoration or addition to a maritime collection. Please see our photos and good luck!