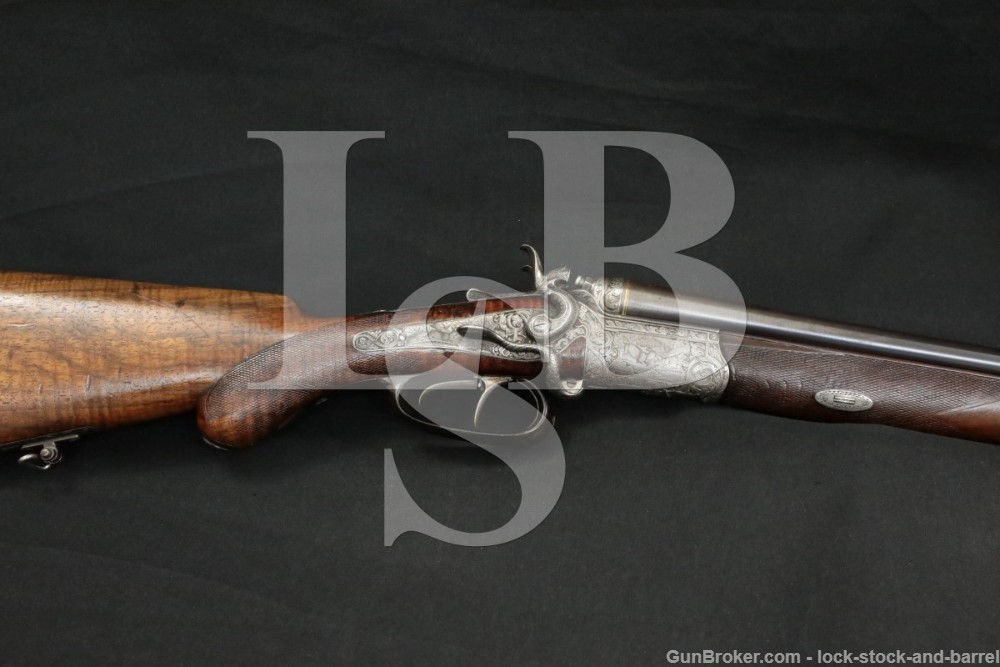 Year of Manufacture: We suspect that the “19” marking is a date code, but this would have been at the very end of, if not after Paubel’s career. It is possible that the gun was made earlier than 1919.

Caliber/Gauge: The shotgun barrel is chambered for 20 gauge, 2 1/2″ shells. The rifle barrels are chambered for a straight-wall cartridge of approximately 10.5mm diameter. We suspect they are chambered for the 10.3x65mm Rimmed Baenziger cartridge, but the chambers should be cast to confirm.

Markings: The top of the rib is marked “CARL PAUBEL IN SUHL” in gold. The bottom of the shotgun barrel and the left shoulder of the receiver are each marked “16506”, the inside of the forend iron is marked “506”. There are a series of German proof marks on the bottoms of the barrels, the barrel flats and the right shoulder of the receiver. There is extensive engraving on the receiver, lockplates, hammers, levers, the cartridge-storage assembly in the belly, and the exposed portion of the forend iron with gold motif on the rear of the barrels.

Stock Configuration & Condition: The stocks are two-piece checkered walnut with schnabel forend, horn guard, horn capped pistol grip, straight comb with cheekpiece, checkered horn buttplate, a trapdoor compartment in the belly for three cartridges and a sling swivel mounted in the trapdoor assembly’s tang (there is another swivel mounted to the bottom of the shotgun barrel in front of the forend). The forend is secured with a wedge. The stocks have scattered nicks, dings, scuffs and scratches. There are a few minor losses at edges with a more notable loss at the bottom edge of the left lockplate. There are cracks at the toe on each side above the trapdoor assembly. The checkering ranges from well defined to worn smooth. The LOP measures 12 7/8″ and 11 3/4″ from the fronts of the triggers to the back of the buttplate. The plate has scattered wear, mostly at the heel and toe, with otherwise well defined checkering. The hole ofr the top plate mounting screw is stripped, the screw turns freely. Drop at comb is approximately 1 1/2″, drop at heel 2 3/8″. The cast is about neutral. Overall, the stocks are in about Good condition.

Bore Condition: The bores are mostly bright with some scattered light erosion and infrequent minor pitting. The rifling in the rifled bores is strong.

Overall Condition: This drilling retains about 65% of its metal finish. The finish is thinning at all edges. The barrels have scattered finish wear, most notable over the forend. Some of the worn areas are going to a light patina. There are some scattered nicks, scuffs and scratches. There is some dark discoloration in the relived areas of the engraving on the lockplates and top tang toward the front. The action shows operational wear. The screw heads range from sharp to tool marked with strong slots. The markings are clear. Overall, this drilling is in Very Good condition.

Mechanics: The action functions correctly. There is a lever on the right to open the action. The lever on the top tang selects between the rifle and shotgun barrels. The triggers can be set by pushing forward until they click. When the shotgun barrel is selected, it is fired using the rear trigger, and the front trigger can still be used to fire the right rifle barrel. The barrels lock up with no play to the receiver. We have not fired this drilling. As with all used firearms, a thorough cleaning may be necessary to meet your maintenance standards.

Our Assessment: Combination guns have been a popular “do-all” gun for generations, with some still being produced today. The combination of a shotgun for fowl and a rifle for terrestrial game allows the hunter to become familiar with one gun for all their trips to the field. There are several configurations for combination guns from side-by-side to over-under, with drillings specifying three-barrel variations. Examples such as this, with two rifled barrels and one smoothbore, are somewhat less common due to the difficulty of regulating the rifled barrels, ensuring that both would strike the same point. This example was produced by a Suhl-based gunmaker named Carl Paubel in the early 20th century. Its shotgun barrel is chambered for 20 gauge shells and we believe that the rifled barrels are chambered for the 10.3x65mm Baenziger cartridge, which is essentially a brass .410 casing loaded with a solid projectile. This should be confirmed by casting the chambers. Not content with the novelty of being a drilling, an of an uncommon configuration, the gun is rounded out with a variety of sight options, horn fixtures on the stocks, storage for extra cartridges in the belly, and beautiful engraving. This will make a great piece for drilling or fine European firearms collectors. Please see our photos and good luck!