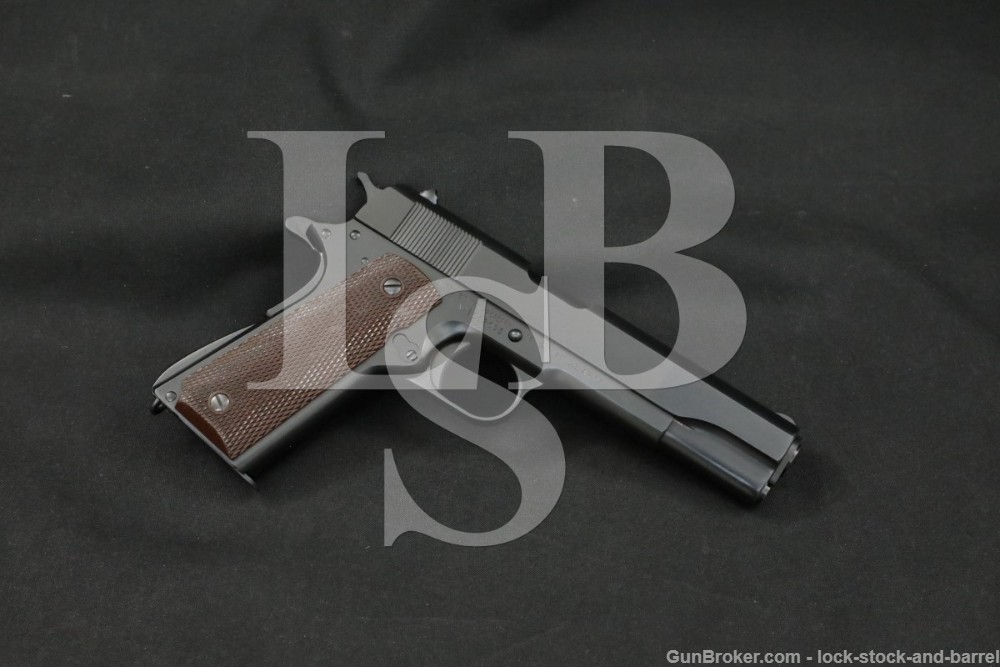 Stock Configuration & Condition: The grips are two-piece checkered brown plastic with reinforcement rings around the screws and reinforcement ribs on the inside. The grips have minor handling wear with a few light marks, most on the right panel. The checkering is generally sharp. There are no chips or cracks. Overall, the grips are in about Fine condition.

Overall Condition: This pistol retains about 98% of its current metal finish. The balance is mostly in minor operational wear. Some polishing is evident in the right-front of the trigger guard and in the trigger relief cuts on each side of the frame. There are two spots on the bottom of the dust cover which have a plum hue. Visible inside the dust cover is more notable discoloration and evidence that these are holes which were filled, welded and polished. The screw heads are sharp. The markings are clear. Overall, this pistol is in Fine condition as refinished.

Box, Paperwork & Accessories: This pistol comes with a single 7-round magazine. The magazine has minor operational wear and some minor erosion under the finish with intact feed lips and a strong spring, in about Very Good-Fine condition as refinished.

Our Assessment: The 1911 and 1911-A1 pistols served the military of the United States from 1911 to 1985, through two World Wars and the Korean and Vietnam wars. They gained a reputation as a reliable handgun with plenty of stopping power, and are held in high regard by those who have used them. As in the Great War, production demands of WWII required many manufacturers to produce military equipment for the war effort. While much of the small arms production was performed by arms manufacturers, there were also contracts that went out to other firms. As the name suggests, Union Switch & Signal Co. produced switches and signaling equipment for railroads. They received a contract to produce 200,000 1911-A1 pistols, though the contract would be shortened with only 55,000 delivered to the government. This makes the US&S 1911-A1s the second rarest of all the manufacturers, behind only Singer who developed the educational material to allow non-firearms manufacturers to swiftly tool up to produce 1911 pistols. This example has been refinished, so it looks great, retaining about 98% of its new blue finish. The bore is bright with sharp rifling and no erosion, indicating that this should make for a good shooter. It appears that at some point there were two holes drilled in the bottom of the dust cover, but it has been quite well restored. This pistol may garner interest from the collectors of WWI and WWII pistols, and 1911s in particular, especially with the great bore and minor wear. Please see our photos and good luck!