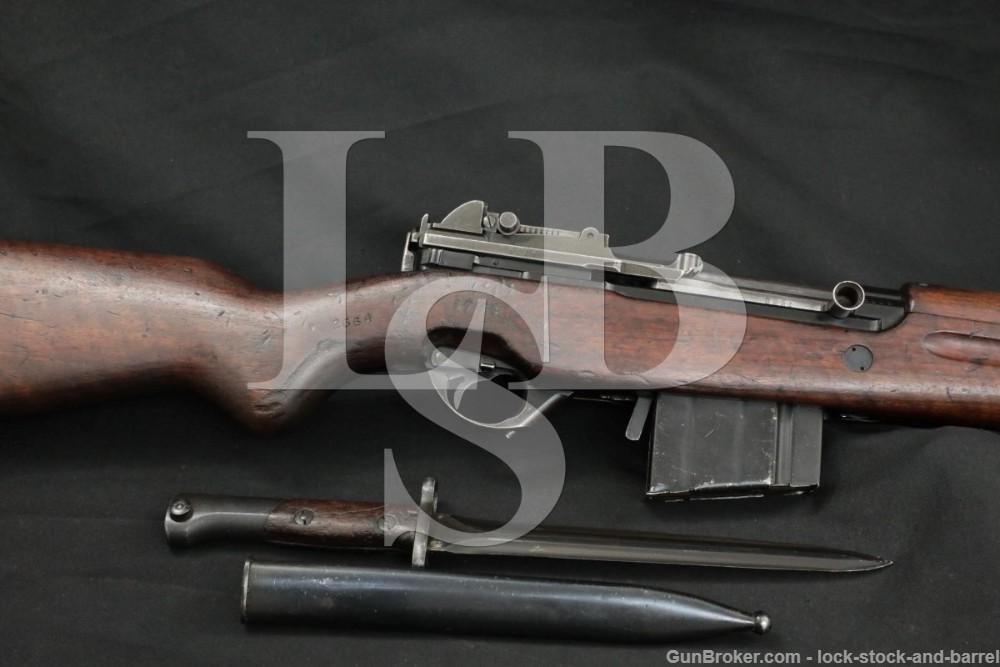 Sights / Optics: The front sight is a dovetail set, bladed post set between two protective ears. The rear sight is an aperture tangent sight marked from “1-10”.

Stock Configuration & Condition: The hardwood stock has a pistol grip, finger grooves, metal nosecaps, barrel band, two sling loops, scallop for the safety and a metal buttplate with hinged door for storage. The buttplate shows wear around the edges, some scattered nicks and scratches, with infrequent minor surface oxidation. The stocks have several scattered light-moderate nicks, dings, scrapes and scratches. There are a few very minor losses at edges. There are no cracks. The LOP measures 13 1/4″ from the front of the trigger to the back of the buttplate. The stock rates in about Very Good overall condition as not original to the gun.

Bore Condition: The bore is bright and the rifling is sharp. There is no erosion in the bore. Our gauge shows an M.E. of 0.0.

Overall Condition: This rifle retains about 85% of its metal finish. Several areas of the black paint finish have been removed by scrapes & scratches. The blue finish below the paint is mostly intact with the most notable wear on the bolt carrier and top cover. The scrapes on the barrel and magazine well have removed some of the blue finish below the black. The screw heads show light use. The markings are clear. Overall, this rifle rates in about Very Good condition.

Box, Paperwork & Accessories: The rifle comes with a 10 round magazine that shows several scratches and areas of thinning. It is in about Good-plus condition. Also included is a bayonet with sheath. The bayonet shows light wear with some nicks, scratches and edge-thinning. The wood grip panels have light-moderate wear. Overall, the bayonet is in about Very Good condition.

Our Assessment: This Rare Argentinean Navy contract FN 49 was made by Fabrique Nationale of Belgium. It was part of only 5,541 purchased in 1953 by the Argentineans. All were originally chambered in 7.65x53mm Mauser (7.65 Argentine). The Navy FN49 rifles were eventually Arsenal converted to fire the 7.62 NATO cartridge by changing out the barrel. This rifle has seen some use but the bore is strong and should make its new owner quite happy at the range for a long time to come. Please see our photos and good luck!