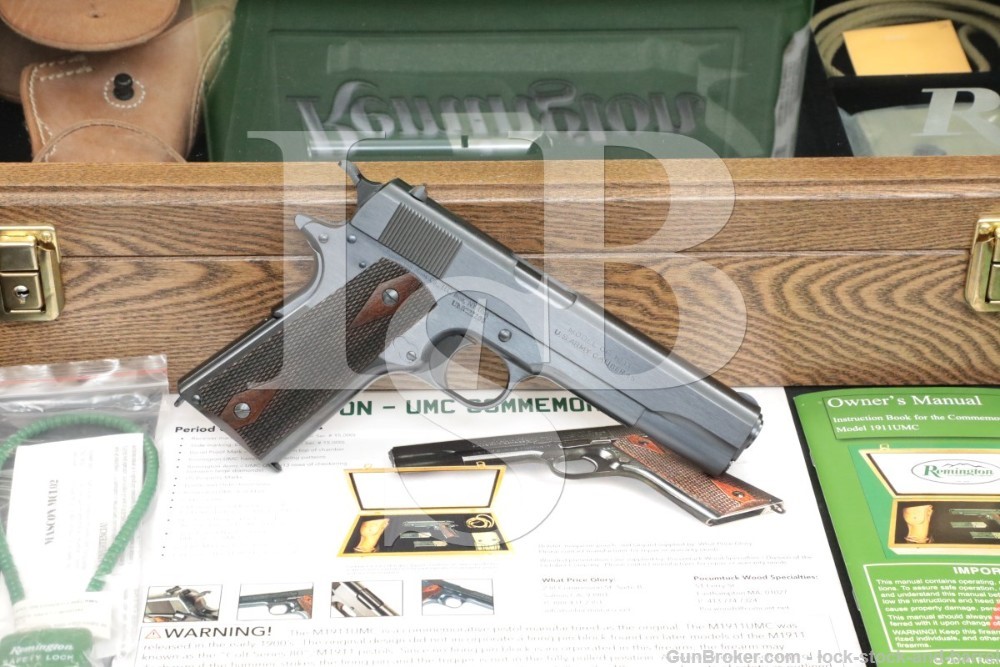 Stock Configuration & Condition: The grips are two-piece checkered walnut panels with smooth diamonds around the grip screws. There are light handling marks. The checkering is strong. There are no chips or cracks. Overall, the grips are in about Excellent condition.

Overall Condition: This pistol retains about 99% of its metal finish. The metal shows some light handling wear. There is a tiny spot of the left of the trigger. There is hardly even any operational wear. The markings are clear. Overall, this pistol is in about Excellent condition.

Mechanics: The action functions correctly. The trigger pull is crisp and the slide is snug on the frame. We have not fired this pistol. As with all used firearms, a thorough cleaning may be necessary to meet your maintenance standards.

Box, Paperwork & Accessories: This pistol comes with a pair of 7-round magazines (the top portion finished in the white, the bottom blued), leather flap holster marked “U.S.” and “R.I.A. / 1916 / WPG”, a lanyard, a dual magazine pouch, paperwork including the manual, green serial matching carry case, and a wood display case with keys. The carry case has a few light marks, in about Excellent condition. The display case has a few little marks and scratches through the finish, mostly on the lid, in about Fine condition. The rest of the accessories are in Excellent condition.

Our Assessment: At the outbreak of the Great War, bringing 1911 production online was easier said than done for Remington as Colt apparently didn’t have any drawings for the design, and never did supply Remington with sets of master gauges. Colt supplied a first set of drawings, but they only included nominal dimensions with no indication of tolerances. A second set of drawings was supplied later, and found to have 430 discrepancies when compared with the first set! Remington proceeded to find five military issue Colt 1911s which had satisfactory parts interchangability and produced their own drawings by measuring every part and setting the nominal measurements as the average and the tolerances as the extremes. This is certainly not the ideal method of starting production, but Colt wasn’t helping and there was a war on! Remington UMC had originally received a contract for 150,000 pistols, later increased to 500,000 in March 1918. At this time, it was thought that the war could go on for years, the Germans launched Operation Michael in the same month this order was increased. Instead, the Germans were pushed back to the Hindenburg line, that line was breached, and the Armistice was signed in November. The result was that Remington UMC produced only 21,676 Model 1911 pistols. This is a Commemorative Remington-UMC 1911 made in 2014. This pistol features period markings, checkering patterns, dimensions, carbona blue finish, and was even made without a firing pin block safety to get as close to the original as they could. Only 1,000 of these rare Commemoratives were made and were all hand fitted. This one looks like it has hardly seen any use and we don’t even think that the two magazines were ever inserted by the previous owner. The pistol comes with a host of reproduction U.S. martial accessories that all sit in a limited edition display case. For those who collect U.S. martial arms, 1911s, or Remingtons this is a cool pistol you ought to drop a bid on. Please see our pictures and good luck in your bidding!