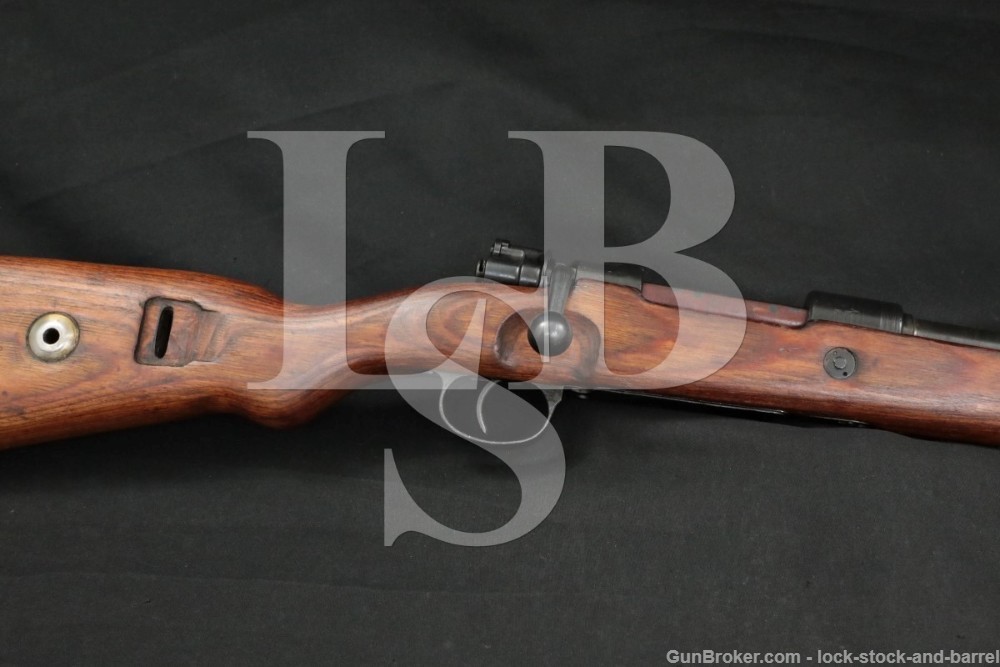 Sights / Optics: The front sight is an inverted “V” post set atop a small ramped base.  The rear sight is a “V” notched blade attached to a sliding sight escalator assembly marked from “1-20”.

Stock Configuration & Condition: The laminate wood stock has a pistol grip, metal nose cap, hole for a cleaning rod (not included), barrel band with sling bar, scallop for the bolt handle, through bolt, slingwell, sling pass through, domed washer and a metal buttplate. The wood shows several scrapes, scratches, and compression marks that have been oiled over. There is a little crack on the bottom of the wrist at the trigger guard tang on the left side. The LOP measures 13 inches from the front of the trigger to the back of the buttplate. The plate is bright and has scattered little nicks and a few spots of discoloration from previous oxidation. The stock rates in about Very Good Plus overall condition.

Bore Condition: The bore is gray and the rifling is deep and strong. There is erosion in the bore, heaviest against the lands.

Our Assessment: This Nazi marked German Mauser K98 was made at Waffenwerke Brunn back in 1944. It most likely saw service during the war and still has Nazi markings including “eagles”, “swastikas”, and Nazi Waffenamts. The top of the receiver and barrel both have an “X” which is a Russian capture mark. After WWII the Russians rebuilt captured K98 rifles and rebuilt them prior to placing the rifles into storage. This K98 looks good and can still put plenty of 8mm downrange. Please see our photos and good luck!