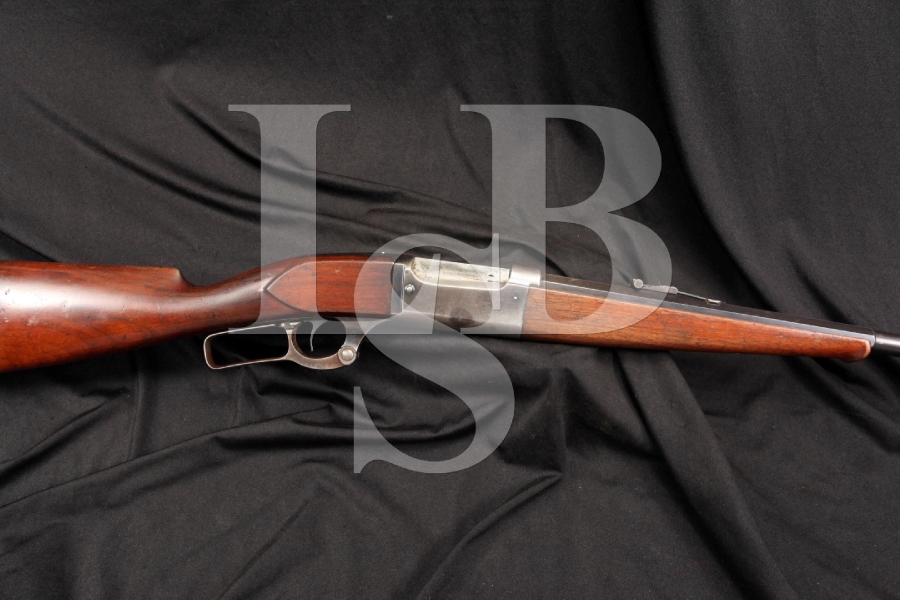 SOLD FOR: $1,000
Make: Savage Arms Corporation
Model: 1899 C
Serial Number: 181011
Year of Manufacture: 1915-1916
Caliber: .303 Savage
Action Type: Lever Action with Fixed Rotary Magazine
Markings: The left shoulder of the barrel is marked “Savage Hi-Pressure Steel / -Model 1899-“. The top of the barrel is marked “Manufactured By Savage Arms Corp. Utica, N.Y. U.S.A. / PAT- Feb.7.1893 July 25.1893 Oct.3.1899 May.25, 1909 June.1.1909.” and “SAV .303”. The front of the lever boss is marked with a “3” in a circle. The underside of the receiver is marked “181011”.
Barrel Length: The half-round half-octagon barrel is 26” in length.
Sights / Optics: The front sight is a tall brass bead dovetailed into the barrel. The right side is marked “Micro”. The rear sight is a flat topped elevator with a “U” groove that is dovetailed into the barrel.
Stock Configuration & Condition: The stocks are dark walnut with a varnished finish. The buttstock has a curved “Perch Belly” underside and a crescent blued steel buttplate. The forend has a Schnabel tip. The buttstock and forend both show handling marks over and under the finish. There is also oil staining under the finish which is heaviest at the butt and grip areas. The buttstock has compression marks on both sides, with a several large marks on the left side. There is a crack at the bottom of the wrist at the rear of the lower tang. The forend has a deep compression on the underside behind the tip, and several other smaller compressions, mainly on the right side. The wood to metal fit is excellent. There are no chips that we noticed. The LOP measures 13 3/8” from the front of the trigger to the back of the steel buttplate, which shows surface loss and wear marks, which are worse at the tip of the heel. The buttplate is in Very Good to Fine condition, as are the stocks.
Type of Finish: The finish is blued steel, except for the lever, which is case colored.
Finish Originality: All Original
Bore Condition: The bore is bright at the breech, tending to dark near the muzzle. The rifling is shallow. There is very light erosion in the grooves near the muzzle. Our bore gauge measures a ME of 2.0. (The .303 Savage has a .308 bore.)
Overall Condition: This rifle retains about 55% of its finish. There is a tiny compression mark on the left front edge of the barrel. The round part of the barrel shows surface loss at the muzzle, with thinning along the left side and spots of thinning on the right. It also has handling marks along its length, with small compression marks in several spots on the underside of the barrel. There are also two spots of pinprick surface erosion about 4” back from the muzzle on the top of the barrel. The octagon part of the barrel show thinning on the edges and at the rear of the barrel, with scattered spots of frosting and pinprick surface erosion. There is also pinprick surface erosion on the rear sight. The chamber ring and sides and underside of the receiver show deeper erosion. The rest of the receiver and lever show some frosting, thinning and surface loss. The screw heads are sharp, but with surface loss. The markings are clear. Overall, this rifle rates in about Very Good condition.
Mechanics: The action functions correctly. We did not fire this rifle.
Box, Paperwork & Accessories: None
Our Assessment: The Savage 1899/99 model rifles have quite a history. They were preceded by the Model 1895, which was the first hammerless lever-action rifle produced. A hammerless action was useful as it reduces the lock time, and allows the rifle to be fired more accurately. It is also less likely to jam in brush or snag in clothing. The rotary magazine uses a spring-loaded spool with grooves to hold the cartridges and has a counter added to the spool to indicate how many rounds are loaded. This design allowed the use of spitzer bullets, which could not be used in the Winchester rifles of the times because the pointed tips could cause accidental discharge. This design gave Savage a lead in producing rifles that could handle high velocity smokeless powder cartridges with bullets offering flatter trajectories than other lever-action designs. One of the first was the .303 Savage cartridge, which is chambered in this rifle. It offers improvement in muzzle velocity over the .30-30 Win. as well as ballistic performance due to its pointed tip. It was surpassed when the .300 Savage was introduced, and never became popular as a chambering in other brand rifles. This nearly 100 year old rifle has seen some use, but it still has finish left and the wood-metal fit is great. If this gets past the Savage collectors out there, it will still make someone a nice deer rifle, as it still has a shootable bore.