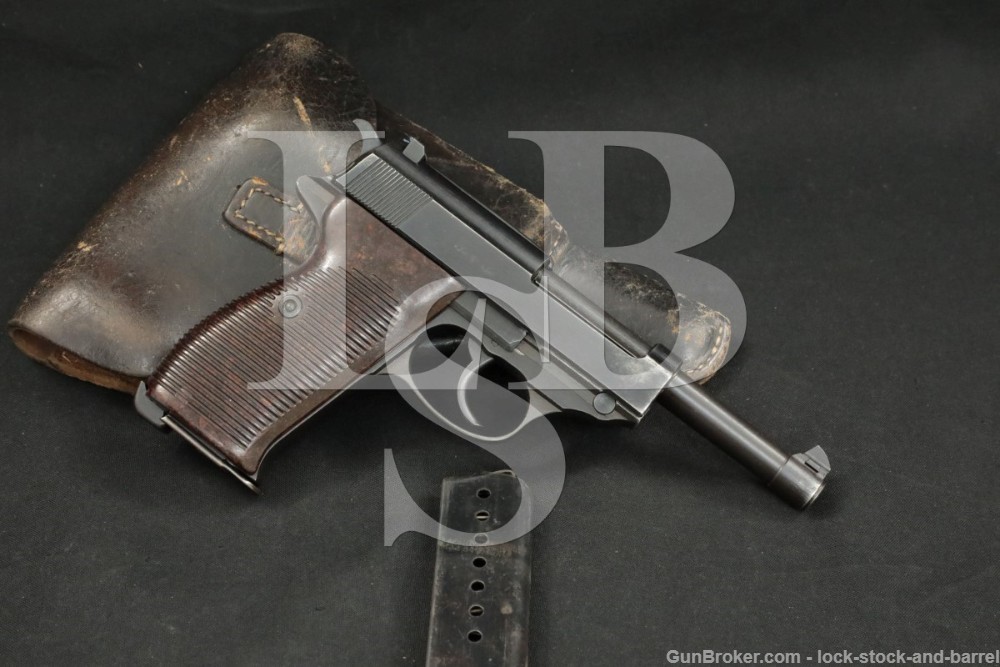 Stock Configuration & Condition: The grips are two-piece serrated brown AEG panels. The grips have scattered light handling wear, but no notable damage. The serrations are well defined. There are no chips or cracks. Overall, the grips are in about Very Good-plus condition.

Bore Condition: The bore is semi-bright with sharp rifling. There is some scattered light erosion in the bore

Overall Condition: This pistol retains about 94% of its metal finish. The finish is thinning at most edges. The most notable finish loss is on the sides of the front sight band at the front of the barrel and the right slide flat at the front with minor handling wear in the grip areas. There are a few other scattered minor marks. The action shows operational wear. The screw head is sharp. The markings are mostly clear, the acceptance eagle on the right of the slide is poorly struck. Overall, this pistol is in about Very Good-Fine condition.

Mechanics: The action functions correctly. The double action trigger pull is smooth, the single action pull has a smooth takeup followed by a crisp break. The slide has minor play to the frame. We did not fire this pistol. As with all used firearms, a thorough cleaning may be necessary to meet your maintenance standards.

Box, Paperwork & Accessories: This pistol comes with a black leather flap holster and a total of two 8-round magazines with “P.38v” marked on the left of the bodies and eagle over “359” waffenamt on the spines (Walther production). The magazines have operational wear, some minor surface oxidation, intact feed lips and strong springs, in about Very Good condition. The holster has a worn waffenamt and “JWa” marking on the back (Moritz Stecher, Lederwerk, Freiburg) on the back. The holster has scattered wear, some fraying on the flap-tongue and intact stitching, in about Good condition.

Our Assessment: The P38 occupies a significant place in history. It was the first locked breech pistol to have a single action/double action trigger. After the start of WWII, Walther could not keep up with the production rate required, and production was ordered to commence at both Mauser and Spreewerke in 1940. Mauser was busy building Lugers at the time, and their conversion to P38s took quite a while, possibly because they didn’t want to make the P38 in the first place. Production didn’t really get started until October of 1942, and completed pistols were not assembled until early 1943. This P38 pistol is a Mauser byf-44 which was made before the simplification of features and substitute finishes seen on later-war production models. It has the correct markings, matching serial numbers, and about 94% of its original finish remaining. The bore has some scattered light erosion but retains strong rifling and the mechanics are strong. This is a great example of the byf44 series of P.38 pistols and will make a great shooter or addition to a collection. Please see our photos and good luck!