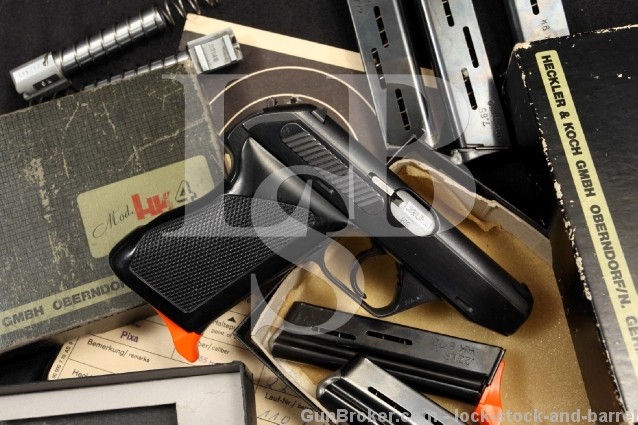 SOLD FOR: $1,440
Make: Heckler & Koch
Model: HK4
Serial Number: 22149
Year of Manufacture: 1973
Caliber: .22 Long Rifle with barrels for .32 ACP (7.65mm) and .380 ACP (9mm Kurz)
Action Type: Traditional Double Action Semi-Automatic (DA/SA) with Removable Magazine.
Markings: The left side of the slide is marked “Heckler & Koch GMBH / Oberndorf /N Made In Germany” and “MOD HK4”. The right side of the trigger guard is marked “JVA.NW”. The barrel is marked “.22LR”, an Eagle 983” and “HK”. The left side of the trigger guard is marked “72” and with 2 proofs. The underside of the frame is marked “22149”.
Barrel Length: 3.3”
Sights / Optics: The front sight is a short blade and the rear sight is a square notch dovetailed into the slide.
Stock Configuration & Condition: The grip is one piece checkered black plastic with a thumbrest on the left side and covers the backstrap. The left grip is marked “HK” on the bottom of the grip. The grips show handling marks plus a small ding on the edge of the thumbrest. The checkering shows very light wear with no mars and is still sharp to the touch. The grips rate in about Fine overall condition.
Type of Finish: The alloy frame is black with a shiny finish. The sides of the blued slide are bright while the top has a matte finish.
Finish Originality: All Original. The finish appears original and all of the markings are clear and deep. However, the matt finish on the slide was done in such a way that it almost looks like the slide is pitted under the finish and is best described as a very fine stippling.
Bore Condition: The bore is mirror bright and the rifling is sharp and deep, especially for a rimfire. There is no erosion in the bore.
Overall Condition: This handgun retains about 93% of its metal finish. The top front corner of the slide shows small compression marks and there is a small compression mark on the left bottom edge of the slide. The left side of the slide shows thinning on the front edge and the front top and bottom edges. The front of the raised portion of the slide on both sides shows thinning. The extractor shows thinning and small compression marks. The bottom of the trigger guard and the front strap show handling marks. The left edge of the safety shows thinning. The grip screw is sharp. The markings are clear. Overall, this handgun rates in about Fine condition.
Mechanics: The double action trigger pull is a little catchy. The single action pull is light but with definite creep. The action functions correctly. The safety blocks the trigger when engaged with the hammer down and is said to block the firing pin when the hammer is back, allowing the trigger to be pulled safely to decock the hammer. We did not fire this handgun. This pistol has a magazine safety disconnect. Once it is locked back, the slide closes automatically if the magazine is withdrawn and then re-inserted.
Box, Paperwork & Accessories: This pistol comes with a total of 6 blued magazines. The .22 Long Rifle magazines have bright orange finger extension floorplates and the other magazines have black plastic finger extension magazines. The magazines are marked “.22 LR / HK 8/70”, “.22 LR / HK 3/72”, “HK .22 LR / 11/74”, “HK 9k”, “7.65 / HK 2/72”, and “7.65 / HK 3/72”. They all show minimal wear and are in Excellent condition. In addition to the .22 Long Rifle barrel in the pistol, there are also two other stainless steel barrels complete with mainsprings. One is marked 9k / ID” and with 2 proofs, and the other is marked “7,65 / HK” and “22149” on the bottom flat. The latter is what came installed in the pistol from the factory. The barrels both have sharp bores without erosion and are in Excellent condition. Both the pistol and the accessories come in factory cardboard boxes with a black finish marked “Mod HK4” on the lid. The pistol box shows finish loss on the edges and is frayed at the corners, and in about Very Good condition. The accessory box is worn through the outside finish on the edges, frayed at the corners and shows a multitude of handling marks. The bottom of the box has a cardboard liner cut-out for two barrels and a magazine. It is in about Good condition. Included with the pistol box is a factory test target showing a 5-shot 1 9/16” group, fired at 15 meters, dated Oct. 1973, and showing the serial number of this pistol.
Our Assessment: From Wikipedia: “The HK 4 pocket pistol was first introduced by Heckler & Koch in 1967 making it the first pistol produced by the company. Mass production of this pistol started in 1968 and continued until 1984. There were approximately thirty-eight thousand pistols produced during this time. Serial numbers 10001 to 36550 were for commercial distribution. Twelve thousand pistols were produced for the German police and other government agencies in .32 ACP caliber with the designation P11 and were serial numbered 40001 to 52400. It is rumored that the basic design of the pistol is based on that of the Mauser HSc.”. This HK4 comes complete with barrels and magazines for all three calibers this pistol was made in: .22 Long Rifle, .32 ACP and .380 ACP. This is a very unique pistol that is well made and has been shot very little judging by the wear on the gun and bores. It can be used with the .22 Long Rifle barrel as a plinker, or throw in one of the other two and use it as a carry gun. We are not very comfortable with the idea of squeezing the trigger to drop the hammer with a round in the chamber (with the safety on), but the chamber is easily cleared by dropping the magazine and cycling the slide, so this shouldn’t really be a problem.