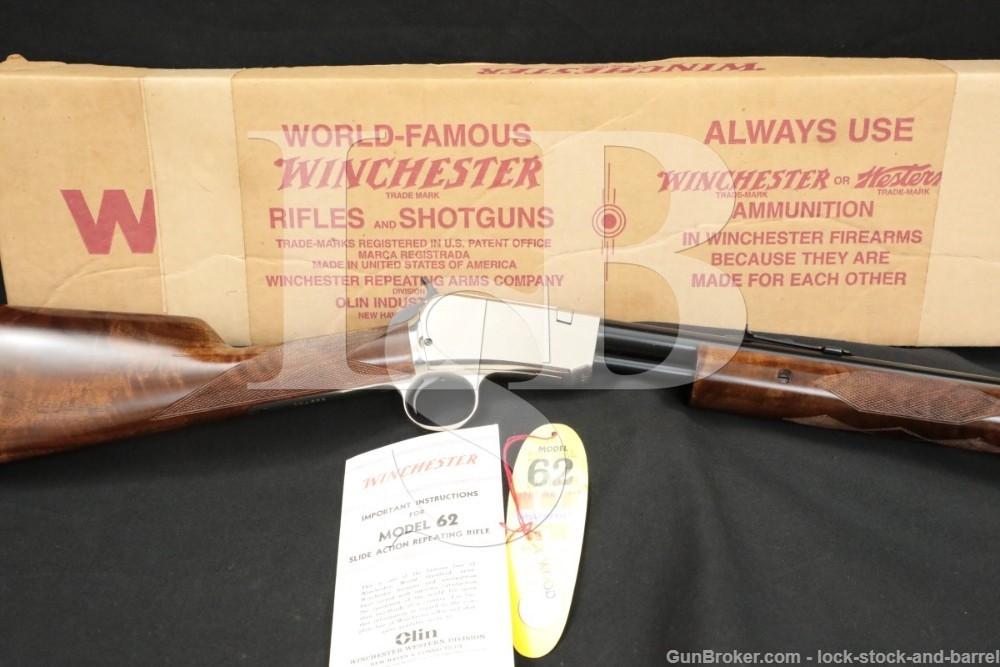 Stock Configuration & Condition: The stocks are two-piece checkered walnut with a flat-bottom slide handle, straight grip, straight comb and checkered black hard rubber Winchester buttplate. There are some scratches on the top of the comb at the heel. There is a little mark through the finish on the left side of the slide handle at the front. There is a light compression on the right side of the buttstock at about the start of the comb. The checkering is sharp. There are no chips or cracks. The LOP measures 13 1/4″ from the front of the trigger to the back of the buttplate. The plate has minor wear at the heel and toe with well defined checkering and lettering. Overall, the stocks are in Fine condition.

Overall Condition: This rifle retains about 97% of its metal finish. There are some little cloudy freckles on the receiver from age and storage. There are a few draglines, most noticeable on the frame. The barrel and tube have a few faint marks from cycling. Otherwise, there are only light handling marks. The screw heads are sharp. The markings are clear. Overall, this rifle is in Excellent condition.

Box, Paperwork & Accessories: Included is a serial matching box with wax paper, hangtag, and manual. The box has some light edge wear, creases, and some scuffs, in about Fine condition. The box and hang tag may be reproductions, Winchester boxes had the makers name and box information in addition to the box code on the bottom, this one just has the box code number. This item has been previously sold as having reproduction box & hang tag.

Our Assessment: Ever since 1890 when Winchester brought out a slide-action rifle with that year’s model number, the Model 1890 pretty much ruled the roost for rimfire repeaters, also known as gallery guns. This tubular-magazine rimfire was wildly popular not only in the plethora of shooting galleries across the U.S. but in the hands of young boys and men who loved to shoot and hunt small game. The Model 1890 was a John Browning design and the first commercially successful repeating rimfire rifle. Sixteen years later an almost identical rifle sans the expensive-to-manufacture octagon barrel and crescent buttplate was introduced as the Model 1906. Both models continued to be produced until 1932, when they were replaced by a more modern Model 62. The Model 62 rifles proved extremely popular over the years. Their flat-sided receivers were dead flat, the round barrels were round and without ripples, the wood to metal fit was outstanding. The craftsmanship and work ethic that went into the guns was valuable to the shooters at the time, and this value remains to this day with the collectors. This Model 62A rifle was made in 1958, and is a rare and desirable Gallery Gun. True Winchester Gallery Guns have a few distinct features. They were chambered for .22 Short, more suitable for the short distances of shooting galleries and the generally crowded environments in which they were hosted. The loading ports had a triangular shape, which facilitated the use of the speedloaders which helped get the guns into the hands of the next customer faster. Lastly some, but not all, were roll-marked on the side of the receiver with the Winchester logo, the better to let the gallery’s customers know who made the rifle which brought them so much enjoyment. This example is in exquisite condition, retaining about 97% of its metal finish with barely any sign of use. The bore is bright with sharp rifling and no erosion. This is a nice rifle in great condition and will ne a nice addition to a C&R collection. Please see our photos and good luck!