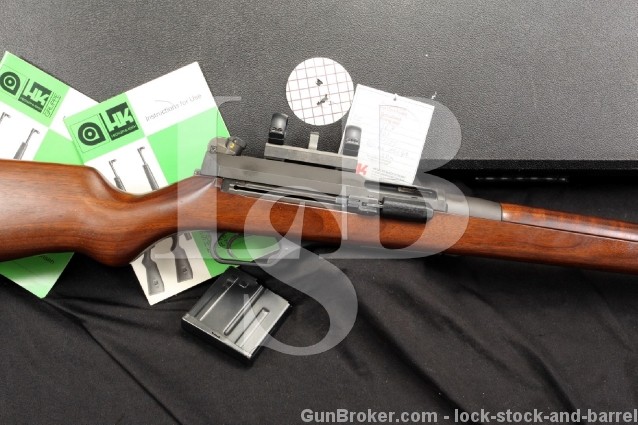 SOLD FOR: $3,055
Make: Heckler & Koch
Model: HK-SL7 Carbine
Serial Number: 24395
Year of Manufacture: Modern, but prior to 1986
Caliber: .308 Winchester
Action Type: Delayed Blowback Semi-Automatic with Detachable Magazine
Markings: The left side of the barrel is marked with a Winged Eagle over “N” German nitro proof and “24395”. The left side of the receiver is marked “Heckler & Koch GMBH / Oberndorf/N Made In W-Germany”, and “Mod. HK-SL7”. The screws at the back of the magazine well and trigger guard are marked “ABC / 88” and the screw in front of the magazine well is marked “S / 8.8”.
Barrel Length: 16 ½”
Sights / Optics: This rifle is mounted with a 4 position rear sight that is adjustable for windage and a front post protected with a military style ring. The rear sight rotates to provide an open “V” notch at the first position, with peep (aperture) sights at the marked “2, 3 and 4” positions. The front post is held in with a set screw at the front of the sight and is replaceable. The receiver has square hole in the top for mounting factory scope mounts.
Stock Configuration & Condition: The stock is one piece walnut with a separate walnut handguard, both with a satin finish. The stock has a pistol grip, an inletted steel side-mount sling attachment and a thick steel buttplate. The forend and handguard have a steel band at the front which includes an eyelet for a side-mount sling. The stock shows light handling marks with compression marks on the left side of the stock just behind the grip, a few tiny compression marks on the right side, and marks on the underside from the toe forward about 4”. The right side of the stock shows minor compression marks near the receiver, compression marks on the left side at the front of the magazine well and on the underside of the forend. The handguard also shows multiple compression marks. The LOP measures 13 ¾” to the back of the buttplate, which is in Excellent condition with just a few light marks. The stock rates in about Fine overall condition.
Type of Finish: The barrel and receiver have a matte black finish.
Finish Originality: All Original
Bore Condition: The bore has a small amount of fouling in it, but otherwise is about the shiniest we have ever seen, and is an excellent example of H&K’s polygonal bore which really doesn’t have rifling. There is no erosion.
Overall Condition: This rifle retains about 95% of its metal finish. The front sight band and ring and the barrel show a few minor handling marks. The forend/handguard band shows handling marks with some through the finish on the top surface, with tiny compression marks on its front edge. The chamber ring, the top of the receiver just behind it and the sides of the receiver show a few minor handling marks. The top of the receiver shows marks from where scope mounts were attached. The Allen screws show thinning with faint marks. The markings are clear. Overall, this rifle rates in about Fine condition.
Mechanics: The action functions correctly and the swing-out bolt handle provides lots of leverage for clearing stuck cases. We did not fire this rifle.
Box, Paperwork & Accessories: This rifle comes in a black plastic case with a factory scope mount and rings, two magazines and two Owner Manuals, one in English and one in German. The case has a crinkle finish and is marked “HOPPE’S / PROTECTO / CASES”. It has a molded double handle with 4 metal latches on the front and four 4” long hinges on the cover. The latches have a black matte finish, and the two outside have an internal lock, but there is no key. All four latches show handling marks. The outside of the case shows a few minor marks. The inside of the case is lined with egg crate foam which is compressed and shows oil stains where the rifle laid. There is also a small piece of foam missing. The case rates in overall Very Good condition. The scope mount and rings have a black matte finish. There are faint marks around the scope ring screws and a small compression mark on one of the rings. The mount and rings are in Excellent condition. The magazine in the rifle is blued, and appears to hold 3 rounds. It is marked “.243 / .308” on the left side and “2” on the follower. It shows light wear on the sides and is in Excellent condition. The 2nd magazine holds 10 rounds and is marked “.308” on the left side and “3” on the follower. It shows light wear with handling marks on the floorplate and is in Fine condition. Both manuals show no disfiguring marks and are in Excellent condition. Also included is a factory test target, shot at 50 meters and marked with the caliber, load used and serial number of this rifle. The three shot group was about 0.8”.
Our Assessment: This is a really neat little rifle. Everything is where you want it, from the bolt release you can easily reach with your right thumb to the easy to operate magazine release you can actually release with the tip of your right index finger. Your left hand naturally sits at the front of the 10 round magazine, pulling the rifle into your shoulder, ready for a quick magazine change. If you were looking for a semi-auto carbine, and don’t need a rail system for holding 4 different sights and lights, this is an outstanding choice. It is in Fine condition with just a few marks, most of which will be covered up if you attach the supplied scope mount and rings. Why settle for .223 Remington when you can have a .308 Winchester and really reach out for those 400 yard shots?