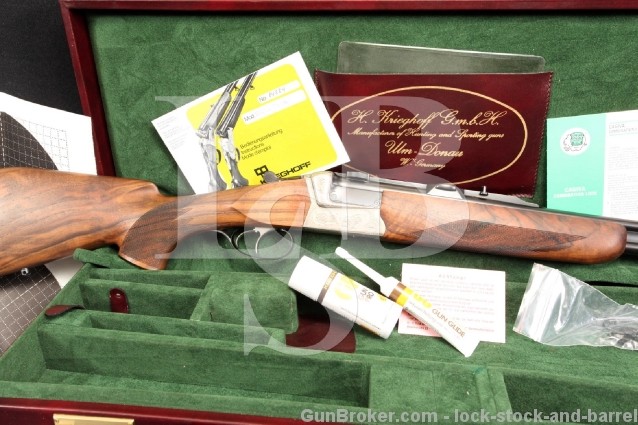 SOLD FOR: $6,925
Make: Krieghoff
Model: Teck BDB
Serial Number: 84884
Year of Manufacture: 1985
Caliber: .375 Holland & Holland / .375 Holland & Holland
Action Type: Box Lock Over / Under Rifle, With EJECTORS!
Markings: The underside of the frame is marked “KRIEGHOFF – TECK”. The top of the frame rails are marked with the serial number and the West German Nitro Proof marks. The left side of the bottom barrel, beneath the forearm is marked “IMPORTED BY MELVIN J. HUNTINGRFIIF – MEAD. NEW JERSEY”. The left side of both barrels at the chambers are marked “SUPER – CHROMOVAN” and with a Nitro Proof. The underside of the barrels at the rear are marked “375 H & H / Magnum” with a “V” between the lugs. the right side of the lug is marked “MADE IN / W-GERMANY”. The left underside of the barrels is marked with the German Nitro proof mark, the Ulm antler proof and “IF” for 1985. The left side of the lug is marked “KREIGHOFF / ULM”. The underside of the barrel ahead of the lugs is marked “84884 / E / 491” and with another Nitro Proof. The inside of the forearm hardware is marked “884”.
Barrel Length: 25″
Sights / Optics: The front sight is a fixed blade on a ramped base and the rear sight is a fixed notch, dovetailed into the rib. The rib is also mounted with integral claw mounts for a scope.
Stock Configuration & Condition: The stocks are beautifully grained walnut, with hand cut checkering a German hog back comb and left side cheek piece. There is a sling swivel stud in the belly and another on the bottom barrel. The rifle has a checkered plastic Krieghoff plate installed with rubber bumper pad installed at the upper screw to protect the buttplate in rack storage. We see a lot of guns and with this one, you can see why Krieghoff has the reputation it does for quality. There are a few light scattered marks and the checkering is slightly worn. This rifle has been to Africa and though cared for, was used. There is a “P” on the right side of the wrist, marked in a red crayon or grease pencil. Our consignor remembers that this mark was not on the gun until it mysteriously appeared after clearing customs at the Kilimanjaro airport. Unfortunately this mark has stained the wood and someone has tried to remove it, lightening the finish and imparting some surface depressions. The LOP measures 14″ from the front of the forward trigger to the back of the plastic butt plate. The stocks rate in about Excellent overall condition.
Type of Finish: Plated & Blued
Finish Originality: Factory Original
Bore Condition: The bore is bright and the rifling is sharp. There is no erosion.
Overall Condition: This rifle retains about 97% of its metal finish. The balance of the finish shows some light finish loss on the barrels under the forearm. There are also a couple of very light scratches on the left underside of the barrel forward and above the lug. With the forearm on, the rifle looks great and shows really no wear. There is slight marking to the edge of the trigger guard and the upper tang from operation of the safety. The joke here at the shop is that the “P” mark on the stock was actually a “B” for back up as it looks like this rifle never left the case in Africa. The screw heads are barely marked. The markings are clear. Overall, this rifle rates in about Excellent condition.
Mechanics: The action functions correctly. We have not fired this rifle.
Box, Paperwork & Accessories: The Cagiva brochure for the case locks, the serial numbered manual and both test targets are included. Both sling swivel studs are also included along with the Krieghoff Spray Oil and Gun Glide. Finally, the rifle and all of these accessories are fit into a beautiful leather luggage case with green felt lining. The inside lid of the case is embossed over leather: “H. Krieghoff G,b, H, / Manufacturer of Hunting an Sporting guns / Um – Donau / W. Germany”. The case has a few external scuffs, several of them into the leather. These were likely incurred during shipping or storage and aside from the cosmetic damage to the leather, the case is sound and in Fine condition overall.
Our Assessment: The rifle is as beautiful as it is powerful and Krieghoff needs little introduction.

A bit from Krieghoff: “1886 the first Krieghoff was built. Throughout this journey, we have gained over 125 years of experience day by day which we have used to continually improve our products and develop new innovations. Today many hunters as well as clay target shooters trust in the quality and precision of our Hunting and Sporting Guns.

The beginning of Krieghoff lies in Suhl, Thuringia in 1886, where Ludwig Krieghoff and his partner founded the arms factory Sempert & Krieghoff. Since the company’s founding the main focus lay on building fine hunting guns. Even today Ludwig Krieghoff’s principle “Die Läufe schießen, aber der Schaft trifft!”® (You shoot with the barrels, you hit with the stock) still stands. Therefore custom stock making became an integral part of the Krieghoff gun making process and guaranteed the excellent shooting results with Krieghoff guns – and still holds true today.

In 1916 Ludwig’s son Heinrich founded his own company in Suhl which later incorporated his father’s business. An able engineer and business man, Heinrich developed amongst other things a semi-automatic rifle and a hookless shotgun. He also enhanced the legendary Krieghoff drillings, which are still part of today’s production program.

After the war Krieghoff relocated to Ulm, Baden-Wurttemberg, in 1950 and quickly gained ground again.”

To this day, it can be said that no maker makes higher quality hunting and sporting arms than Krieghoff. This rifle is further reinforcement of that notion and is in a chambering that delivers as hard of a hit down the muzzle end as it does at the butt.