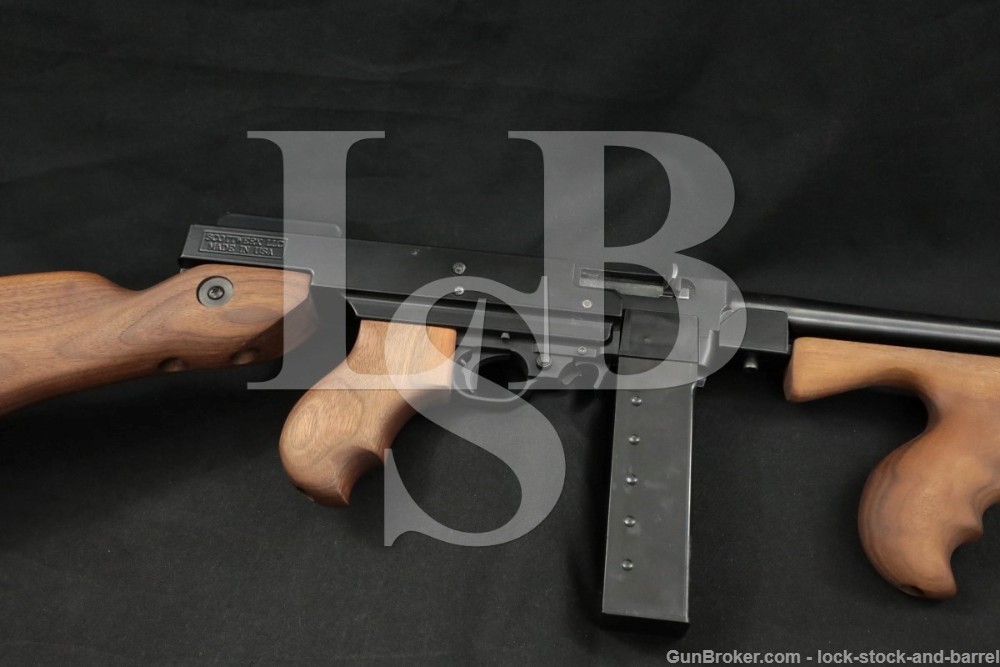 Model: This is a Ruger 10/22 receiver that has been built into a Tommy Gun style rifle with a Scottwerx kit.

Markings: The top of the barrel shows a Ruger two-line warning. The left side of the receiver is marked with the serial number, “825-44198”, followed by “RUGER®” and  “MODEL 10/22® CARBINE/ .22 LR CALIBER”. The back of the bolt handle is marked with the Ruger phoenix logo. The right rear of the chassis is marked “SCOTTWERX LLC / MADE IN USA”.

Sights / Optics:  The front sight is a beaded blade dovetailed into a banded base integral to the barrel. The rear sight is a fixed aperture peep sight that is integral to a base with protective ears screwed to the chassis. The top of the receiver has two pairs of drilled, tapped, and filled holes.

Stock Configuration & Condition: The stocks are a three-piece smooth wood with pistol grip with finger-grooves, pistol grip forend with finger grooves, straight comb, and black polymer buttplate. There are no chips or cracks. The LOP measures approximately 15 1/4” from the front of the trigger to the back of the smooth black hard rubber buttplate. The buttplate shows light scuffs on the toe. Overall, the stocks rate in Excellent condition.

Overall Condition: This rifle retains about 96% of its metal finish. The rear sight dovetail notch shows a more notable nick on the left side. The barrel shows scattered light scuffs most notable on the left side over the foregrip and scattered spots of light surface oxidation most notable where the original barrel band would have been. The top of the receiver shows two larger nicks from a previously installed optic rail. Screws show minor tool marks with strong slots. All markings are clear. Overall, this rifle rates in about Fine condition.

Box, Paperwork & Accessories: This rifle includes one (1) 10-shot rotary magazine that has been modified to look like a Thomspon stick magazine. The magazine shows light operational wear, has intact feed lips, and rates in Fine condition.

Our Assessment: The Ruger 10/22 platform is one of the most rugged, versatile, reliable, and well liked rifles ever produced, with unending options for customization and legendary out of the box accuracy. It is no surprise that an ocean of manufacturers produce aftermarket components for such a well-liked rifle. This is a Ruger 10/22 receiver with a Scottwerx Tommy Gun kit installed. Most of us are familiar with the Tommy Gun, but few would ever associate it with the 10/22 platform. The Thompson was developed during World War I when John T. Thompson realized the need for a close-quarters weapon for trench warfare rather than the cumbersome rifles the soldiers were issued. However, the prototype was completed, but by then WWI was already over. The Army and Marine Corps evaluated the gun and thought favorably of it, but did not make any large orders. While the military had purchased only small numbers, the gun was widely used by gangsters and was one of their weapons of choice. It was used in many bloody incidents including the St. Valentine’s Day Massacre. This is a cool take on one of the most well-known firearms of all time and sure would be fun to shoot. This one has a bright bore with sharp rifling and looks like it was hardly ever used. If you want to train a young shooter how to nail some cans, this street sweeper would not only look cool but deliver lead as aimed. Please see our pictures and good luck!