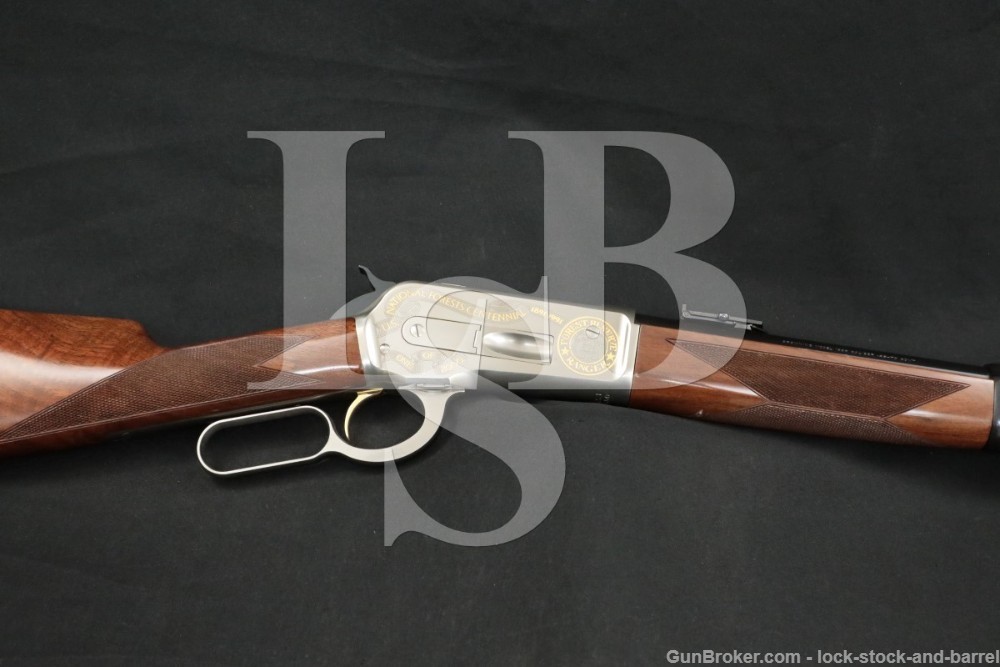 Sights / Optics: The front sight is a blade pinned into a base at the front of the barrel. The rear sight is a two position sight, it is flat-topped “U” notch when down and when flipped up it is a ladder sight with a “U” notched slider.

Stock Configuration & Condition: The stock is a two-piece checkered walnut set with a straight grip, straight comb, and steel carbine-style buttplate. The forend has a few little scuffs and a couple infrequent little tiny marks. The most noticeable mark on the forend is a ding that has damaged the finish on the bottom at the rear. The buttstock has some scattered compressions draglines. There is a cluster on the right and a compressed thin line on the left. There are a couple tiny marks into the finish on the comb at the toe. There are only a few marks in the checkering which is otherwise sharp. There are no chips or cracks. The LOP measures 13 1/4” from the front of the trigger to the back of the buttplate. The buttplate has some light marks mostly at the heel. The stocks are in about Very Good-Fine overall condition.

Overall Condition: This rifle retains about 98% of its metal finish. There are a few little rubs on the bottom of the receiver that have caused smooth spots. There is faint thinning on the edge of the muzzle. There are a few spots of faint thinnign on the barrel band. There are some light handling marks. The screw heads are sharp. The markings are clear. Overall, this rifle rates in about Fine condition and would be Excellent but for the wear in the stocks.

Our Assessment: From 1883 until 1900, John Moses Browning’s rifle designs were manufactured by the Winchester Repeating Arms Co. The 1886 lever action rifle was chambered in rifle caliber rounds and featured a new elevator system. Browning severed his relationship with Winchester in 1900 and the Browning Company began having their products manufactured at FN in Belgium and later at Miroku in Japan. This is a Miroku manufactured 1886 Limited Edition National Forest Centennial 1886 chambered in .45-70 Government. This rifle is in about Fine condition with some scattered marks in the stocks, 98% of its metal finish, and the bore is bright with sharp rifling. It is a splendid looking rifle featuring beautiful walnut stocks and limited edition National Forest engravings on the receiver which have gold accents. This is number 926 of 2,000 and would make a great addition to a Winchester of Browning collection. Please see our photos and good luck!