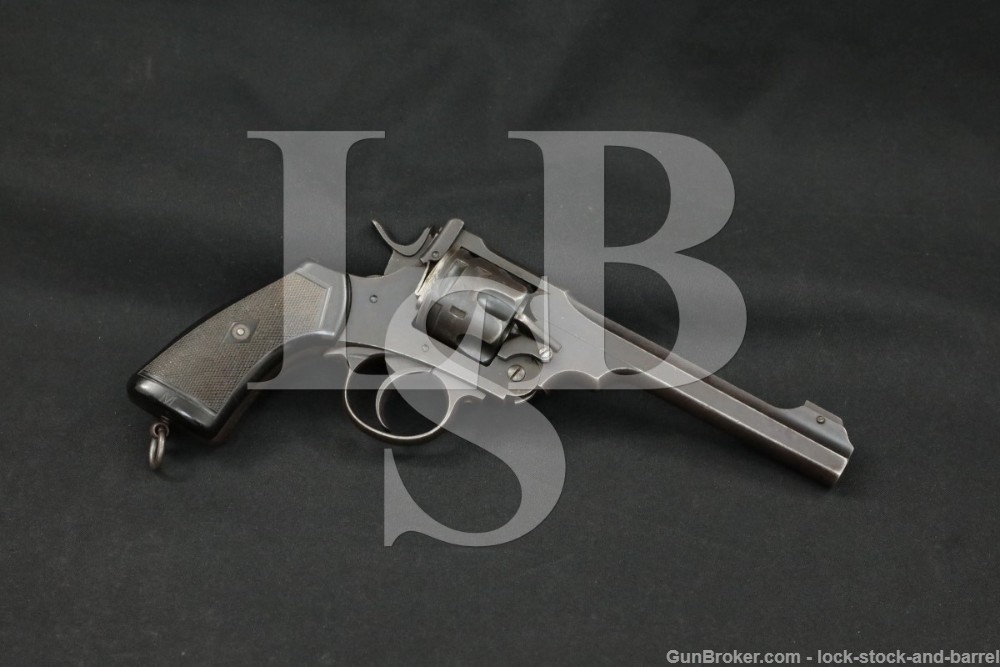 Markings: The left side of the top strap is marked “’22”, a “Crown / GR / Crossed Flags / P” proof mark, a “^” British broad arrow acceptance mark, a “Crown / B3 / Sideways E” inspection mark and at the rear with a large “*”. The right rear of the frame is marked “ENFIELD / MK VI / 1922” with a large crown in the center. There are proof and inspection marks on the outside of the cylinder behind each flute, on the bottom of the wings on each side of the barrel at the rear. The outside of the cylinder, bottom of the frame in front of the trigger guard and the front face of the barrel lug are each marked with the serial number. Each grip panel has an “M” at the bottom. There are two unit markings on the backstrap, one struck out, with a third unit marking in the fronstrap. The frontstrap unit marking is “M.P.F.PK. 20”, an Australian Military Police Force marking. The butt is marked with a broad arrow over “SA”, a South Australia marking. The left of the barrel is import marked “INTERARMS / ALEXANDRIA, VA.”.

Sights / Optics: The front sight is a blade pinned to a raised slotted base on the barrel rib. The rear sight is a “U” notch at the bottom of a “V” in the top of the top strap latch.

Stock Configuration & Condition: The grips are black checkered hard rubber with a smooth diamond around the grip screw escutcheon on each side. There is a large “M” marked near the bottom of each grip. The grips have scattered light nicks, scuffs and scratches. The checkering is well defined. There are no chips or cracks.

Overall Condition: This handgun retains about 70% of its metal finish. The finish is thinning at all edges. There is some scattered light surface oxidation. There is handling wear in the grip areas which have mostly gone to a light patina. There are some scattered light nicks and scratches. The action shows operational wear including a turn-line on the cylinder. The screw heads range from sharp to tool marked with strong slots. The markings are generally clear, some are worn and incomplete. Overall, this revolver is in about Very Good condition.

Mechanics: The action functions correctly. The cylinder lock-up shows very little play when the trigger is depressed. There is no play in the barrel lock-up. We did not fire this handgun. As with all used firearms, a thorough cleaning may be necessary to meet your maintenance standards.

Our Assessment: The Webley MK VI revolver, chambered in .455 Webley, served the British Military through WWI, and into the inter-war years. This revolver has a big, strong action and although the .455 round had good stopping power, the British decided to replace it with the Enfield No. 2, firing a .38/200 cartridge, which was identical to the .38 S&W except for the weight of the bullet. They wanted a smaller revolver that wouldn’t intimidate new recruits learning to shoot a revolver for the first time. This MK VI is in about Very Good condition, with about 70% of its new blue finish remaining. The bore is mostly bright with sharp rifling and infrequent minor erosion. The cylinder lock-up shows a small amount of play and the barrel lockup is solid. This revolver has both English acceptance marks on the frame and barrel, and the cylinder, frame and barrel serial numbers are matching. This will make a nice addition to a collection of English vintage service revolvers, especially as many of these which have made their way across the pond were modified to use more popular American calibers. This example is still chambered for the original .455 Webley cartridge, a feature which is becoming more and more uncommon here in the States. Please see our photos and good luck!