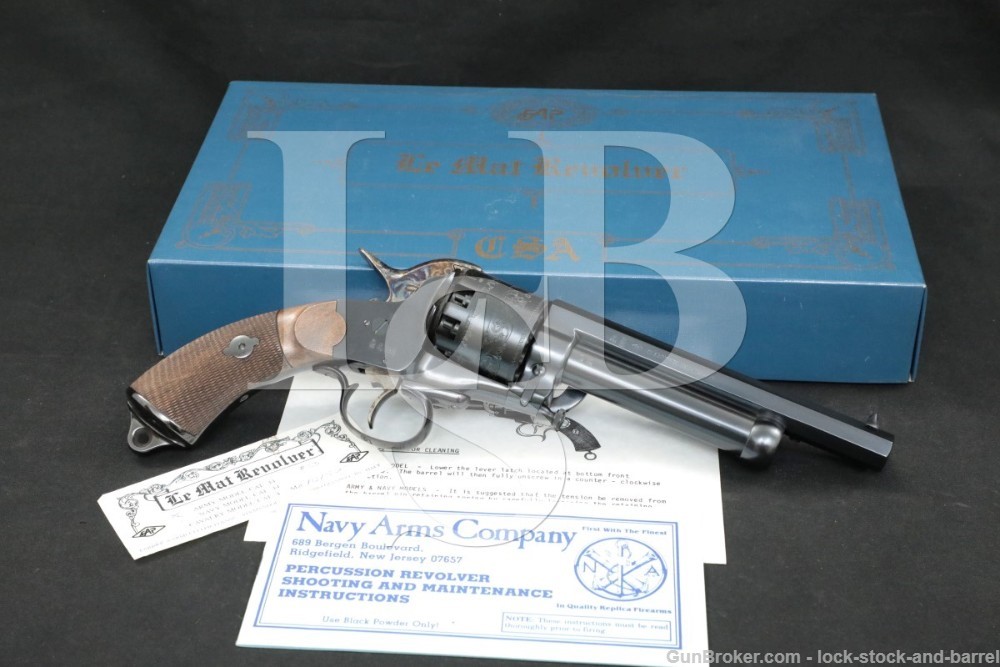 Sights / Optics: The front sight is a blade dovetailed to the front of the barrel. The rear sight is a “U”-notch in the hammer.

Stock Configuration & Condition: The grips are two-piece checkered walnut. The grips have no notable wear or damage, only light handling marks. The checkering is well defined. There are no chips or cracks. Overall, the grips are in Excellent condition.

Bore Condition: The bores are bright and the rifling is sharp in the rifled bore. There is no erosion in either bore.

Overall Condition: This revolver retains about 98% of its metal finish. The barrel shows a few scattered barely perceptible marks. The case color on the hammer and trigger is strong. The screw heads are mostly sharp. The markings are mostly clear. Overall, this revolver is in about Fine-Excellent condition.

Mechanics: The action functions correctly. The cylinder locks up with minimal play on each chamber. The hammer has a folding strike face which can be flipped down to strike the shotgun barrel’s nipple. The trigger is crisp. We did not fire this revolver. As with all used firearms, a thorough cleaning may be necessary to meet your maintenance standards.

Box, Paperwork & Accessories: This pistol comes in a laminated blue box with paperwork including a manual. The box shows just a few minor creases and small nicks and rates in about Fine-Excellent condition.

Our Assessment: The LeMat revolver was manufactured from 1856 to 1865, with approximately 2,900 being produced. The first models were manufactured by John Krider of Philadelphia, with the second model (the first overseas model) being produced by Charles Frederic Girard and Son of Paris. Quality concerns prompted LeMat to consider production at the Birmingham Small Arms Company in Birmingham, England, but production was never mounted there. LeMat revolvers from France were shipped to the Confederate forces via the United Kingdom, and all firearms landed in the UK were (and still are) required to be proofed. The LeMats which found their way through the Union blockade were stamped with British proof marks from the Birmingham Proof House, leading to the misapprehension that the pistols were actually manufactured in the UK. A handful are known to have been made illegitimately in the UK by an unknown manufacturer, believed to be the London Armoury Company, but only two examples survive to the present day and it is doubtful any of the English-made LeMats ever saw service during the U.S. Civil War. The original revolver, constructed of blued steel with grips of checkered walnut, was not considered to be a very accurate weapon although it was deadly at close range. Civil War cavalrymen, particularly in the South, preferred to carry several pistols, as it was faster to draw another loaded weapon than it was to try to reload a cap and ball revolver in combat. This pistol is a reproduction of the Civil War era LeMat with nine .44 caliber chambers surrounding a 20 gauge smooth bore which serves as the cylinder pin. This beefy revolver would have been quite the weapon in its day, and is no slouch today. With nine .44 caliber rounds on tap and a central bore which can fire buckshot, there isn’t really a comparable modern firearm, though modern firearms would be faster to load. The revolver is in Fine-Excellent condition, showing more signs of handling than actual use. Whether you’re looking to add to a Civil War small arms collection, want to make some smoke on the range, or can just appreciate a revolver with a built-in shotgun, this is just a very neat pistol. Please see our photos and good luck!