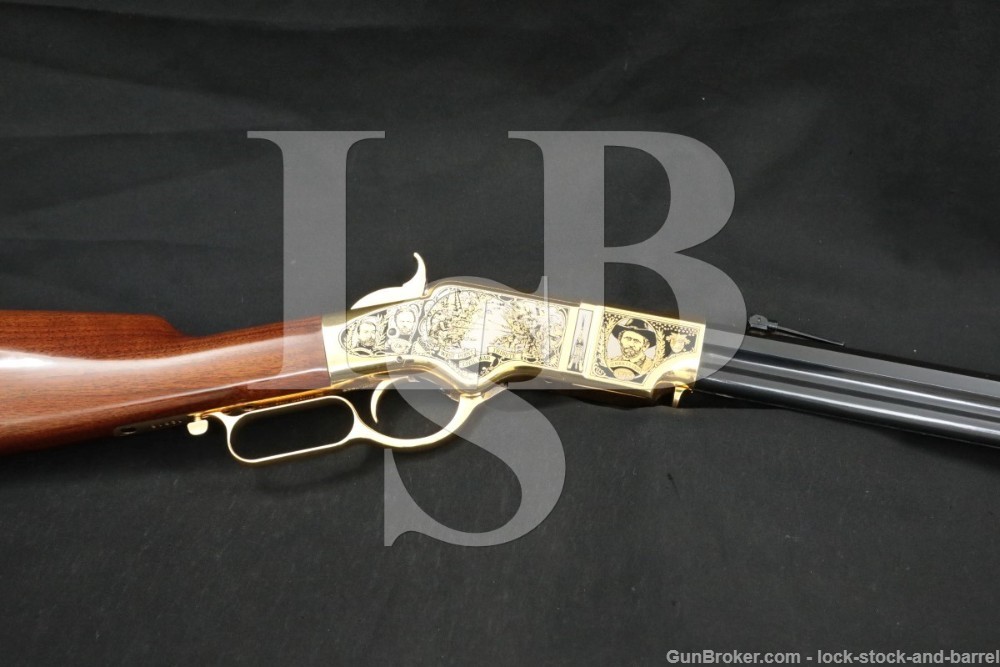 Markings: The top of the barrel is marked “HENRY’S PATENT. OCT. 16, 1860 / MANUFACT’D BY A. UBERTI GARDONE V.T. ITALY” and “19916”. The left side of the barrel is marked with 2 proof marks and “AHL ASHLAND, VA”. The bottom tang is marked “CAT. 1559, with a proof mark and the date code, “A. Uberti & Co. Italy”, and “19916”. The bottom of the receiver just rear of the lifter is marked ““AMERICA REMEMBERS” ®? / AHL ©? ASHLAND, VA” and “A&A ENGRAVING / Rapid City, S.D.”.  The top of the wrist is marked with the United States Military Academy seal between “ASSOCIATION OF GRADUATES / USMA” and “WEST POINT / 129 OF 300”. Both sides of the receiver depict the heads of various notable USMA alumni and the right side of the receiver also shows the scene of a Civil War battle with “WEST POINT”, “CIVIL WAR”, and “TRIBUTE” on banners.

Sights / Optics: This rifle is mounted with a flip-up ladder sight dovetailed into the barrel and a brass blade front sight installed in a slot on the end of the barrel. The ladder sight has markings from “2-8” and also has a fixed “point blank” sight for when the ladder is in the down position. The front sight blade is replaceable with a screw that removes the left side of the slot base.

Stock Configuration & Condition: The buttstock on this rifle is a walnut with a straight grip and comb and a crescent buttplate with a hinged trap for storing a cleaning rod. There is a notable gash in the left wrist through the finish exposing fresh wood. There are cracks near the toe on the left and right side. Aside from those defects, the rest of the stock is rather clean. The LOP measures 13 ¼” from the front of the trigger to the back of the buttplate, which shows minor wear. The stock rates in about Good overall condition but would rate higher if not for the cracks.

Overall Condition: This rifle retains about 97% of its metal finish. There are some very faint scratches infrequently scattered about the receiver. The barrel shows hardly any marks. The action shows light operational wear. The screw heads are sharp. The markings are clear. Overall, this rifle rates in about Fine-Plus condition.

Mechanics: The barrel and magazine tube are combined, and are in two pieces. The front part swivels to allow loading the magazine tube from the front. The action functions correctly. The lever sometimes sticks and needs to be lubricated. We did not fire this rifle. As with all previously owned firearms, a thorough cleaning may be necessary to meet your maintenance standards.

Our Assessment: As paraphrased from the Uberti website: “Tyler Henry of New Haven Arms Company designed the Model 1860 just in time for the Civil War. Only 1,700 of these repeating rifles were issued to Union troops, but the rifle’s reputation quickly grew. Southerners dubbed it “that tarnation Yankee rifle that they load on Sunday and shoot all week”. The Henry was also used in the fight at Little Big Horn. Unfortunately for Custer, all the Henry’s used were by Indians.” This is a neat commemorative piece and is the 129th of 300 made. With its 24” barrel, this rifle holds 13 cartridges in the magazine, and is great for those Cowboy Action team events where you have to split a log or knock down 50 targets. The .44-40 cartridge is great for blackpowder shooters since the bottleneck cartridge does a better job of sealing the chamber than straight wall cases like the .45LC. All this rifle needs is a little lubrication and it’ll be ready for action. Please see our photos and good luck!