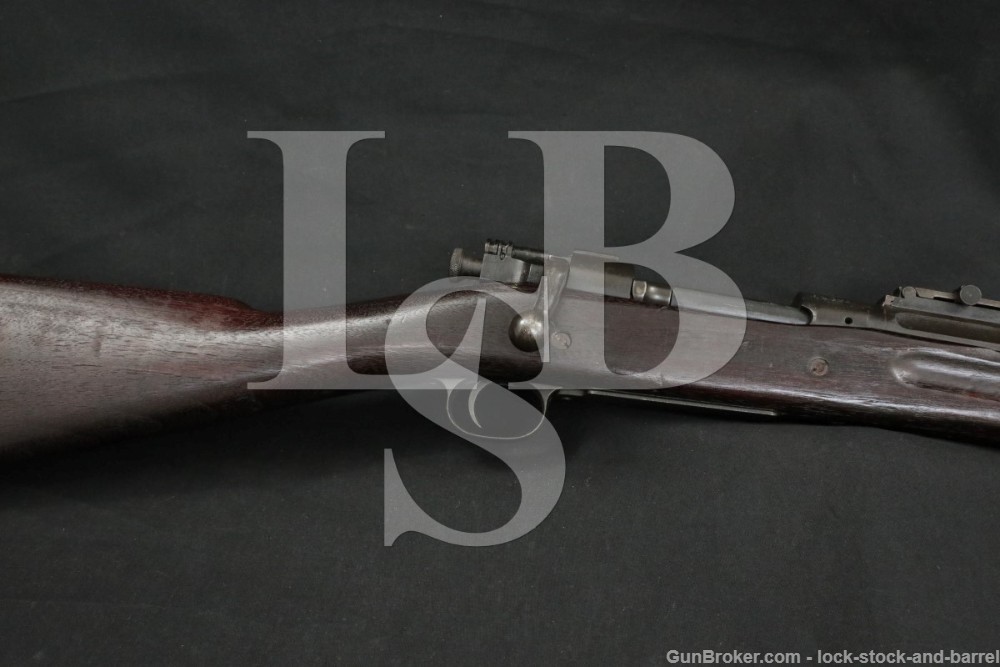 Sights / Optics: The front sight is a pinned blade atop a barrel-mounted base. The rear sight is a “U” notched blade attached to a fully adjustable sight ladder marked from “3-27”. When flipped up separate notches and an aperture on the ladder can be used for sighting.

Stock Configuration & Condition: The two-piece hardwood stock has a straight grip, metal nosecap, stacking loop, 2 sling loops, barrel band, 2 through bolts, and a metal buttplate with a hinged door for storage. The buttplate shows a bit of wear on the edges and a few scuffs. The stock has a crack on the right side at the rear sight. There is a crack on the right side of the buttstock at the heel. There are some scrapes that have removed material on the right side of the butt at the markings. There is a crack on the comb at the buttplate tang and there are cracks on the wrist at the receiver tang. There is a mark on the top of the handguard that has removed surface wood. The stock has some scattered compressions, draglines, and marks through the finish. Most of the marks have colored with age. There are a few hairline scratches that have colored with age. The LOP measures 12 1/2 inches from the front of the trigger to the back of the buttplate. The stock rates in about Good to Very Good overall condition.

Bore Condition: The four groove bore is mostly bright and the rifling is sharp. There are a few freckles of faint surface erosion. The bore has been counter bored about ¼ inch from the muzzle.

Overall Condition: This rifle retains approximately 90% of its metal finish. There are some scrapes on the chamber ring that have damaged the markings. There are some little spots of frost on the metal, most noticeable on the receiver and bottom metal. There are a few little light scrapes and nicks, most noticeable on the barrel. The bolt handle has some scuffs and spots of thinning. There are some small spots of oxidation on the bolt. There are handling marks and there is standard operational wear. The screwheads show use with serviceable slots. The markings on the receiver are mostly clear though some are scraped and damaged but still legible. Overall, this rifle rates in about Good-Very Good condition.

Our Assessment: When the US Army was looking for a rifle design to replace their Krag rifles, they looked at the Spanish Mauser Model 93 they captured during the Spanish-American War. Other than changing the firing pin to a two-piece design and a few other minor alterations, the 1903 was, in fact, a Mauser design, and the U. S. Government ended up paying royalties to Mauser Werke. The rifle was well worth it though. It had a strong and reliable action and served the Army for over thirty years in two world wars. Its fast .30-06 cartridge, adopted in 1906, continued to be the one cartridge that all others are compared against, whether it is for ballistics or felt recoil. This Springfield Armory Model 1903 was made back in 1933. It has been around long enough to see all of WWII. We don’t know if it saw service during World II, but it was around for it. This 1903 has some scattered wear and a few of the markings are slightly marred but it still should be fun to shoot and looks good enough to add to your collection. Please see our photos and good luck!