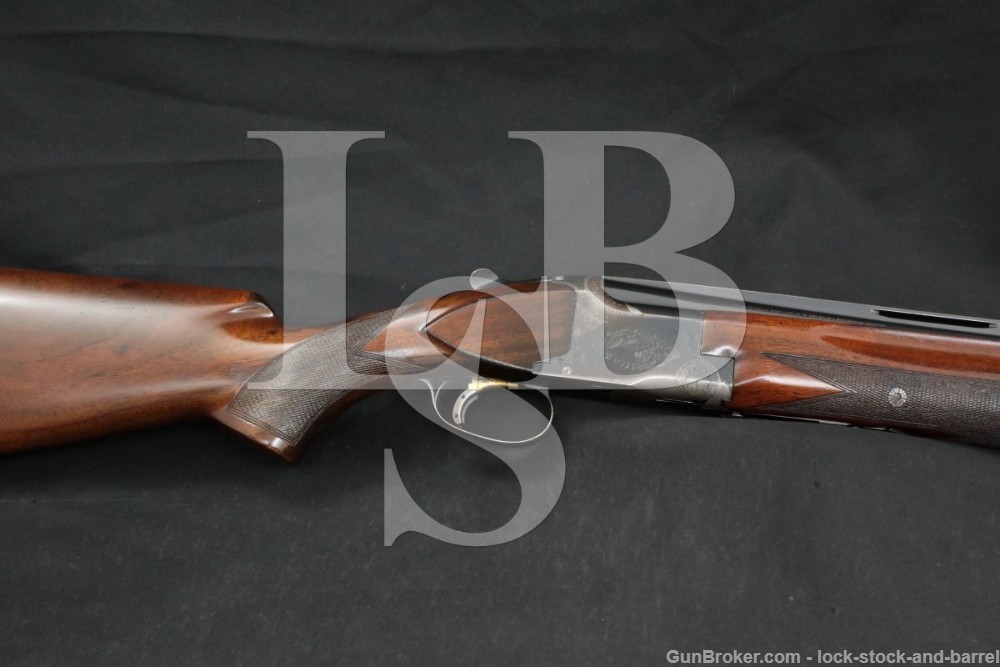 Sights / Optics: There was a white bead in a base mounted at the front of the rib. There is a smaller white mid-bead. The top of the rib has lateral serrations on each side with a strip of in-line serrations down the middle for glare reduction.

Stock Configuration & Condition: The stocks are two-piece checkered walnut with pistol grip, straight comb, and brown rubber Browning recoil pad. The stocks have numerous patches of finish loss, some of the most noticeable are on the wrist and forend towards the front. There are some scattered draglines, compressions, nicks, and dings, some of the most noticeable are on the belly. There is some crazing to the finish, most noticeable on the wrist and forend at the receiver. There is dark discoloration where wood and metal meet. There is a scratch on the right side of the buttstock at the rear. There is a tiny hairline crack on the bottom of the wrist at the tang. The checkering is mostly strong but there are some spots of rub wear that are a bit smooth. There is a crack on the bottom of the forend at the front. The LOP measures 14 1/2” from the front of the trigger to the back of the Browning recoil pad. The pad has wear, most notable at the heel, it is a little loose at the heel. The pad is still supple. Drop at comb is approximately 1 1/14″, drop at heel 1 1/2″. The cast is neutral. Overall, the stocks are in about Very Good condition. We have performed a saltwood check, these stocks are NOT saltwood.

Bore Condition: The bores are bright, there is no erosion. There are some spots of stubborn fouling.

Overall Condition: This shotgun retains about 82% of its metal finish. The frame has some finish loss, patina, thinning, and spots of light erosion. The wear on the frame is most noticeable on the left and bottom. There are some spots of erosion on the left side of the rib. The barrels have some scuffs and some spots of light thinning, the most noticeable thinning is on the edge at the muzzles. There is a spot of light erosion on the left side of the bottom barrel at the forend. There are some scattered light marks on the barrels, there are some scattered spots of light frost on the barrels. The barrels have minor wear forward of the forend from disassembly/reassembly. The top tang has wear from the safety/selector and lever. The markings are clear. Overall, this shotgun is in about Very Good condition.

Mechanics: The action functions correctly including the ejectors. The barrels lockup with some minor movement. The safety does NOT set automatically when the action is opened but functions properly when manually set. We have not fired this shotgun. As with all used firearms, a thorough cleaning may be necessary to meet your maintenance standards.

Our Assessment: After the death of John Browning, his son Val would complete an over under shotgun with a single selective trigger and ejectors; the Superposed was introduced in 1931, it was an instant success; the factory did not produce any of these shotguns during WWII but just after the war ended, the factory came roaring back to life, creating some of their best product to date. This is a post-war FN produced 12 Gauge in 1967, in about Very Good condition, it has about 82% of its metal finish with good bores, and only a bit of wobble to the lockup. The Lightning is a slightly lighter weight variant of the superposed and the Broadway refers to the wide ventilated rib. Val’s SST is still known as one of the most reliable and ingenious of its kind, even though the patent is nearing 100 years in practice. With 32″ barrels choked Full and Improved Modified, this is going to make for a nice hunting or trap gun. Please see our photos and good luck!