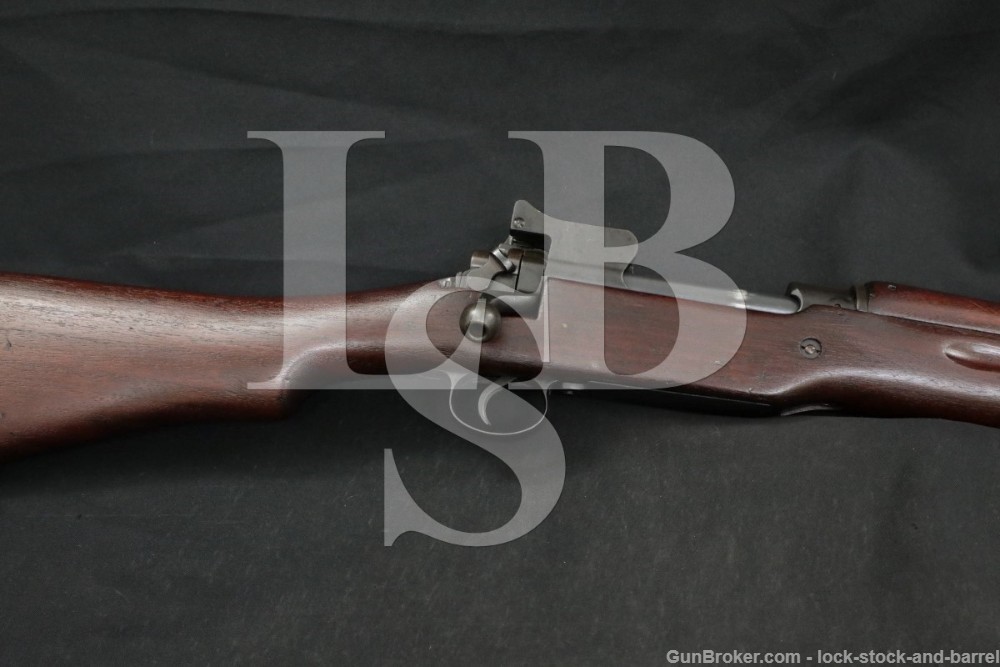 Markings: There is no visible import mark. The front of the Remington barrel is marked “R / flaming bomb / 2-18”. The chamber ring is marked “U.S. / MODEL OF 1917 / REMINGTON / 154274”. The left side of the receiver is stamped with an Ordnance Department “flaming bomb” proof. The top left of the receiver (twice), top of the buttplate, and left of the cocking piece are each marked with an “eagle head” inspection stamp. The bottom of the bolt handle and left of the cocking piece are marked “W”. The right rear of the bolt is marked “E”. The right of the front sight and left of the front sight base are both marked “R”. The top of the front sight is marked “.14 / .075”. The left side of the grip is marked with a “rectangle” containing “3 GM-K”, this marking is not in our reference material but several online sources list it as a M1917 stock “clean & repair” cartouche. The nose of the forend is marked “O”. The bottom of the wrist is marked “3Z”.

Sights / Optics: The front sight is a bladed post set between two protective ears. The rear sight is an aperture set between 2 large protective wings. When flipped up it becomes a sight ladder that uses a sliding aperture. The ladder is marked from “2-16”.

Stock Configuration & Condition: The hardwood stock has a pistol grip, cutout for the bolt handle & safety, finger grooves, nosecap, stacking loop, two sling loops, barrel band, through bolt, reinforcing pin, and a metal buttplate with a hinged door for storage. The buttplate shows dings and finish loss. The wood shows draglines and some compressions. There are a few dings and little scrapes that have mostly colored with age. There are heavier scrapes on the belly at the toe that have removed surface wood. There are no chips or cracks. The LOP measures 13 ½ inches from the front of the trigger to the back of the buttplate. The stock rates in about Very Good Plus overall condition.

Bore Condition: The bore is gray and the rifling is sharp. There is some light surface erosion. The bore shows an M.E. of 0.25.

Overall Condition: This rifle retains about 93% of its metal finish as refinished. There are some scattered scuffs and rubs that have lightly thinned the finish. The most noticeable wear is on the barrel. There are a few little dings, mostly on the front sight base. There are some scuffs and scratches. There are a few scattered little marks into the finish. The screw heads show light use. The main markings are deep. Some of the small stampings are faded. Overall, this rifle rates in about Very Good Plus condition as refinished.

Our Assessment: The M1917 Enfield…formally named “United States Rifle, cal .30, Model of 1917” was an American modification and production of the British .303 caliber P14 rifle developed and manufactured during the period 1917-1918….As it entered World War I, the UK had an urgent need for rifles, and contracts for the new rifle were placed with arms companies in the United States. They decided to ask these companies to produce the new rifle design in the old .303 caliber for convenience of supply. The new rifle was termed the “Pattern 14”. In the case of the P14 rifle, Winchester and Remington were selected. A third manufacturer, Eddystone Arsenal – a subsidiary of Remington – was tooled up at the Baldwin Locomotive Works in Eddystone, Pennsylvania. Thus, three variations of the P14 and M1917 exist, labeled “Winchester,” “Remington” and “Eddystone”. When the U.S. entered the war, it had a similar need for rifles. The Springfield Armory had delivered approximately 843,000 M1903 rifles, but due to the difficulties in production, rather than re-tool the Pattern 14 factories to produce the standard U.S. rifle, the M1903 Springfield, it was realized that it would be much quicker to adapt the British design for the U.S. .30-06 cartridge, for which it was well-suited. Accordingly, Remington Arms Co. altered the design for caliber .30-06, under the close supervision of the U.S. Army Ordnance Department, which was formally adopted as the U.S. Rifle, Caliber .30, Model of 1917. This Remington has a nice bore and looks great, it appears arsenal refurbished and has a nice stock. This will make a nice addition to a milsurp collection. Please see our photos and good luck!