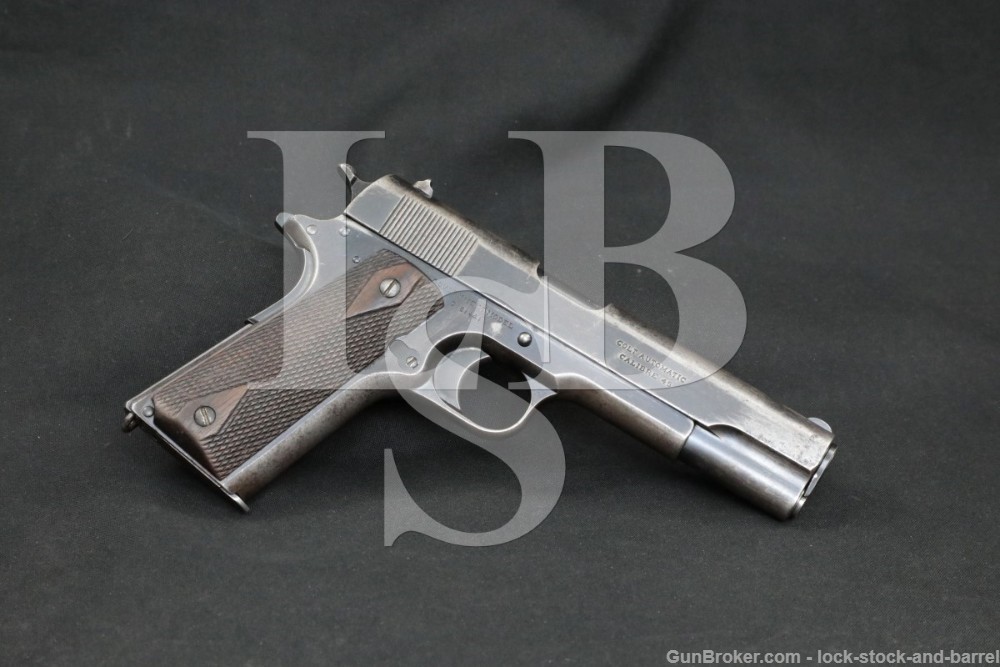 Stock Configuration & Condition: The grips are two-piece checkered walnut panels with smooth diamonds around the grip screws. The grips have some scattered light nicks and scratches with light tool marks around the screw heads. The checkering is well defined, showing light handling wear. There are no chips or cracks. Overall, the grips are in about Very Good condition.

Finish Originality: Original, the barrel is a replacement.

Overall Condition: This pistol retains about 60% of its metal finish. Strongest finish is in the frame flats. The grip areas are mostly worn to white. There is scattered finish wear in the slide. The dust cover has finish wear. There are several scattered light nicks, scuffs and scratches. There is some more notable scratching on the left of the frame under the slide stop. The worn areas show minor discoloration from oxidation. There are infrequent spots of minor surface erosion. The action shows operational wear. The screw heads range from sharp to disfigured with useable slots. The markings are generally clear, the left-side slide legend appears to have been marked with a worn die. Overall, this pistol is in about Good-Very Good condition.

Box, Paperwork & Accessories: This pistol comes with a single 7-round magazine marked “COLT / 45 AUTO” on the floorplate. The magazine has a blued finish with the top portion in the white. The magazine shows light operational wear, infrequent minor surface oxidation, intact feed lips and a strong spring, in about Very Good condition.

Our Assessment: The 1911 and 1911-A1 pistols served the military of the United States from 1911 to 1985, through two World Wars and the Korean and Vietnam wars. They also saw use by a number of foreign nations, from countries like Norway and Argentina which licensed their own domestic production to military aid sent to countries such as Britain during WWII or supplied to allied nations post-war. Colt was also able to provide commercial sales to foreign nations during the Great War, much as was done by Remington and Winchester. Commercial Government Model pistols purchased by the Russian Empire in WWI have an interesting marking in cyrillic, “ANGL. ORDER”, indicating that the order had been placed through England. Russia was in such deep debt that as a condition of extending credit, the English required that orders to American companies be placed through England so as to prevent competing demand between their nations. Approximately 51,000 of these pistols were purchased by the Russians before the February Revolution of 1917, which cast some doubt on Russia’s creditors on whether it was wise to continue financing their purchases. This example of a Russian contract Government Model is in quite good condition, when you consider its history and surrounding events. After the February Revolution, the Tsar would abdicate, then would come the October Revolution followed by the Russian Civil War and the rise of the Soviet Union. Compared to other examples we have seen, this pistol is in quite good condition. This is a wonderful piece of history, and will make a nice addition to a WWI small arms or 1911 collection. Please see our photos and good luck!