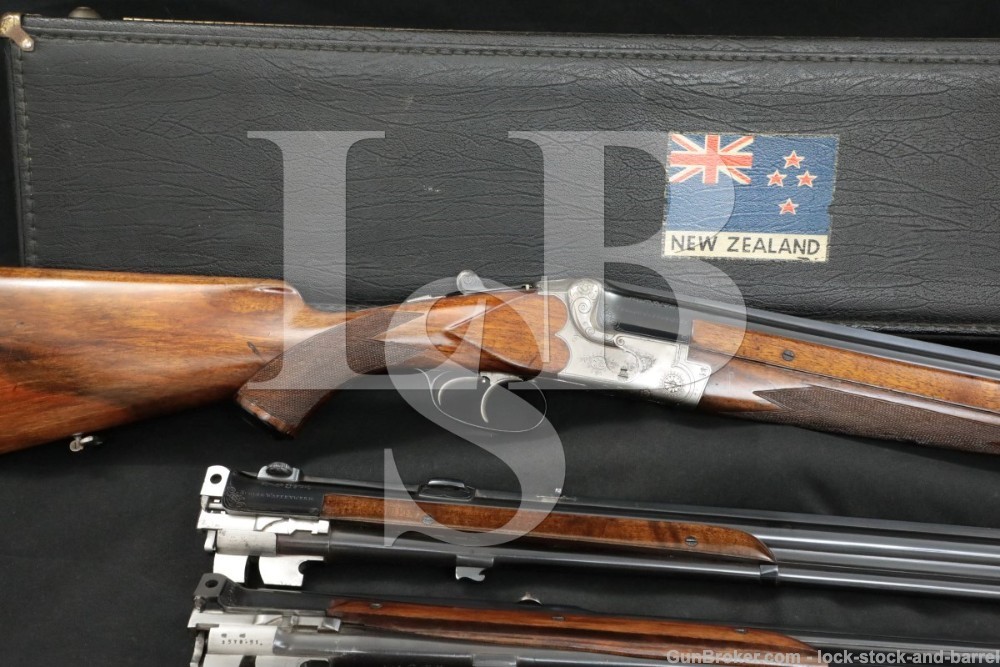 Model: We believe this is a model 213e, it may have been made prior to Merkel’s model numbering system.

16 Gauge O/U: There is a brass bead at the front of the solid rib.

Stock Configuration & Condition: Each barrel set has two-piece wood handguards and use a shared splinter forend. The buttstock has a capped pistol grip, straight comb with cheekpiece, checkered horn buttplate with “GM” Merkel monogram and a sling swivel in the belly (only the .30-06 barrel set has a forward sling swivel mounted to the bottom barrel in front of the forend. There are thin cracks at the front of the forend and the rear of the top tang in the wrist. There is a small loss on the bottom edge of the left handguard piece on the combination gun barrel set. The stocks have some scattered light nicks, scuffs and scratches. The LOP measures 13 7/8″ and 12 7/8″ from the fronts of the triggers to the back of the buttplate. The plate has light wear at the heel with well defined checkering. Drop at comb is approximately 1 1/2″ and drop at heel 2 3/4″, consistent across the barrel sets. Overall, the stocks are in about Very Good condition.

Bore Condition: The bores are bright. The rifle barrels’ rifling is sharp. There is no erosion in any of the bores, but there is some stubborn fouling in the 16 GA O/U set in front of the chambers.

Overall Condition: This combination gun retains about 90% of its metal finish. The finish is thinning at some edges, most notable in the receiver. The barrels have a few scattered light nicks, scuffs and scratches with light wear from the forend which is concealed when assembled. The edges of the ribs have some scattered minor nicks. The receiver’s case color has muted in some areas with strong color in the water table and protected areas such as behind the fences, under the lever and around the triggers. The guard has strong finish with only minor marks. The screw heads range from sharp to tool marked with strong slots. The markings are clear. Overall, this combination gun set is in about Very Good-Fine condition.

Mechanics: The action functions correctly. Each barrel set locks up with no play to the receiver. The ejectors work on each barrel set. The front trigger can be pushed forward to set it, resulting in a light pull with a smooth takup followed by a crisp break. The cocking indicators are located in the top tang, one to each side of the lever when the action is closed. The safety does not engage automatically when the action is opened, but functions properly when set manually. We have not fired this gun. As with all used firearms, a thorough cleaning may be necessary to meet your maintenance standards.

Box, Paperwork & Accessories: This combination set comes in a black leatherette case with brass-washed steel corner bolsters and brass latches. The case has a New Zealand flag on the lid portion. There is scattered storage wear and discoloration with some oxidation on the bolsters, in about Very Good condition.

Our Assessment: The name Merkel has been around in Suhl for more than 200 years, with several different “Merkels” being known for making high quality sporting arms. Gebrüder Merkel, today known as Merkel Jagd und Sportwaffen, is the only one which has stood the test of time. Surviving two world wars, Soviet occupation and the East German state, it is still around to this day! This set was made post-World War II in Suhl under the East German government, but before the construction of the Berlin Wall. It is a wonderfully versatile set with a 16 gauge barrel set, a .30-06 barrel set and one combination barrel set with 16 gauge over 8x60mm-M. Able to take game and fowl, it makes for a great all-purpose gun to take on a hunt. It is interesting that such a high quality sporting arm would come out of a socialist nation in the midst of the Cold War, Merkel was one of the only factories in Suhl left intact by the Soviet occupiers, with their sporting guns being sent East as war reparations. This set has since been rescued and brought to America. It is in about Very Good-Fine condition with only normal handling wear, appearing to have spent its life in the care of responsible sportsmen. It is a beautiful set that would be perfect for any sportsman who can appreciate its mix of beauty, versatility, and quality. Please see our photos and good luck!