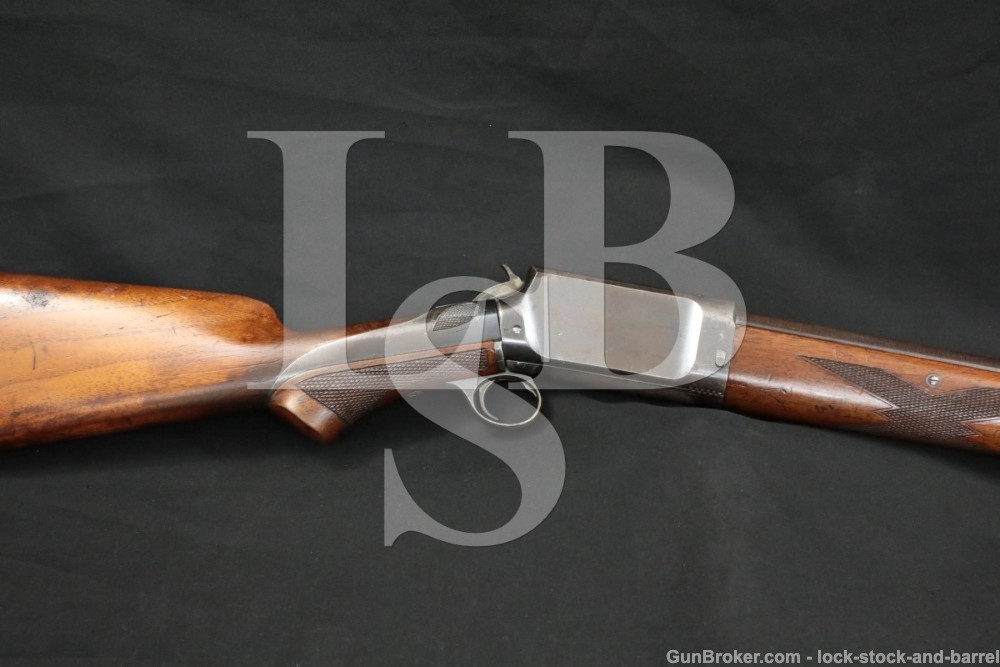 Sights / Optics: The gun is mounted with a single front bead and the top of the bolt assembly is grooved to provide a sighting plane.

Stock Configuration & Condition: The stocks are a three-piece set with a checkered forend and grip and smooth buttstock. The stocks have some scattered nicks, bruises, scuffs and scratches. There are a few tiny losses at edges with a more notable loss at the left-front of the comb. The buttstock has discoloration and wear in the wrist where the grip/slide moves over it and some other scattered discoloration, mostly along the belly and at the rear. The LOP measures 13 7/8” to the back of the checkered hard rubber butt plate. The plate has light wear at the heel and minor wear around the edges with well defined checkering and lettering. The stocks rate in about Very Good overall condition as Antique.

Bore Condition: The bore is gray. There is scattered light erosion and pitting in the bore.

Overall Condition: This gun retains about 75% of its metal finish. The barrel retains generally strong damascus patterning with light wear at the muzzle and a few scattered light marks. Most of the balance is scattered finish wear in the receiver, bolt and slide/trigger assembly, though there are scattered areas with strong blue finish. The worn areas have mostly gone to a light patina, and there are some nicks, scuffs and scratches. The action shows operational wear. The Screw heads range from sharp to tool marked with strong slots. The markings are clear. Overall, this gun rates in about Very Good-Fine condition as Antique.

Mechanics: The action functions correctly. The barrel can be removed by opening the action and depressing a button on the right-front of the receiver. There is a slide release inside the trigger guard at the front. We have not fired this shotgun. As with all used firearms, a thorough cleaning may be necessary to meet your maintenance standards.

Our Assessment: The Burgess Gun Company made slide action repeating rifles and shotguns from 1892-1899, making far more shotguns than rifles. Their mechanism is somewhat unique with the slide handle being the grip, not the forend. To someone used to a traditional pump-action, this is a little awkward at first, but after some handling it’s not too bad. For someone who had never operated a repeating shotgun of any kind, it likely would have felt just fine. The quality of manufacturing was considered fine, but Winchester didn’t want competitors in the repeating shotgun market and bought out the company in 1899, withdrawing the design from the market and never utilizing it again. This shotgun is in about Very Good-Fine condition with strong mechanics, a decent bore and a very interesting history and mechanism. Please see our photos and good luck!