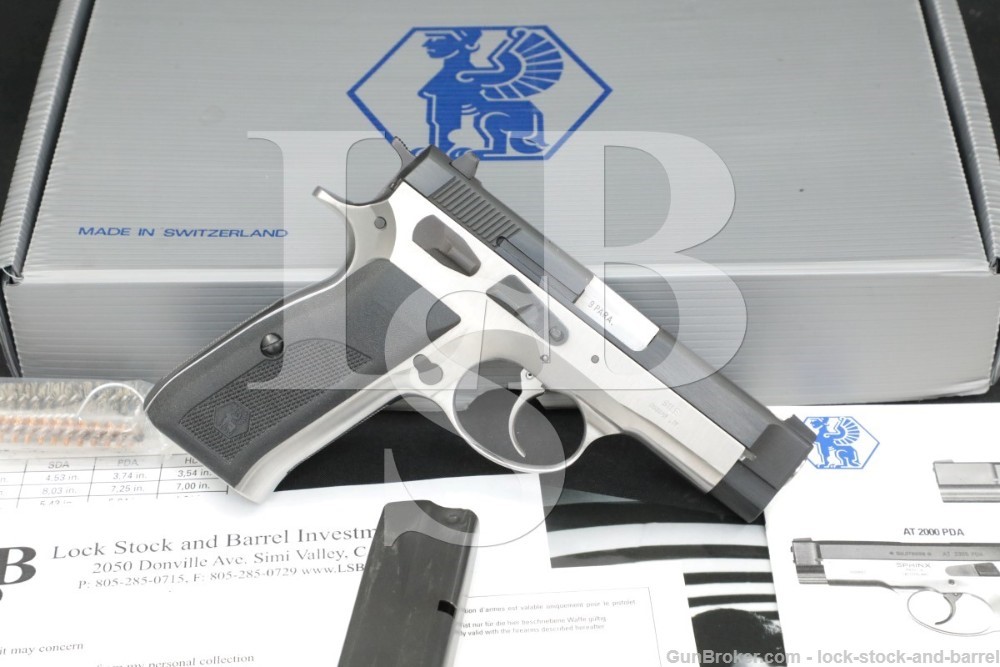 Stock Configuration & Condition: The grips are two-piece checkered rubberized panels with smooth borders and Sphinx logos. The grips have no major defects, just light handling wear. Overall, the grips are in about Excellent condition.

Overall Condition: This handgun retains about 98% of its metal finish. The bottom of the slide has a light mark through the finish, otherwise there are only light handling and standard operational marks. There are a couple faint hairline scratches, most noticeale on the right side of the dust cover. The markings are strong and easily read. The screw heads are sharp. Overall, this handgun is in about Excellent condition.

Mechanics: The action functions correctly. The pistol has a smooth double-action and crisp single-action trigger pull. We did not fire this handgun. As with all used firearms, a thorough cleaning may be necessary to meet your maintenance standards.

Box, Paperwork & Accessories: This pistol comes with a single magazine, serial matching box, paperwork including the manual, a cleaning kit, a picture of James Darren, and a signed letter from James Darren listing this gun by serial number. The magazine is marked “.40 S&W” and is not to this gun, it is 11-rounds and has scattered finish wear from use and a few spots of frost, in about Fine condition. Please note, no magazine will be included for purchasers who reside where this magazine cannot be legally transferred. The letter states that this gun comes from James Darren’s collection and the picture is of him and is from the show “The Time Tunnel”.

Our Assessment: The CZ 75 has been a prized handgun for decades. Czech firearms have been renowned for their quality at least since WWII and Ceska Zbrojovka has continued to provide high quality firearms since 1936. The model 75 has an interesting slide-in design in which the slide moves on inside of the frame rather than the outside like most semi-automatic pistols. This means that the slide-to-frame fit is nice and tight and the reciprocating mass is greatly reduced. It also allows the bore axis to be brought down some. All of this combined with the 9mm cartridge and all-steel construction makes for a very gentle shooting firearm. The design has been so successful that it has also been copied by a number of different companies including Sphinx. Sphinx got into firearms in the 1980s and is best known for their continuous improvements on the CZ 75 design. The Sphinx pistols were primarily used by special forces, military, and competitive shooters due to their high quality and reliability. The Sphinx pistols are built with extremely close tolerances and assembled by master gunsmiths so they tended to be more expensive because they could not be mass-produced, but they are worth every penny. This example is in Excellent condition with about 98% of its metal finish, a bright bore with sharp rifling, strong mechanics, original box, and it hardly even looks used!! This would make a great home defense or carry pistol and would make a good gun for recreational target shooting as well. That said, the scarcity of this model makes it already collectible and this one comes from the collection of actor James Darren. James Darren had roles in films including “The Guns of Navarone”, “Gidget”, “Hearts in Atlantis” and TV series including “T.J. Hooker” and “The Time Tunnel”. Please see our photos and good luck!