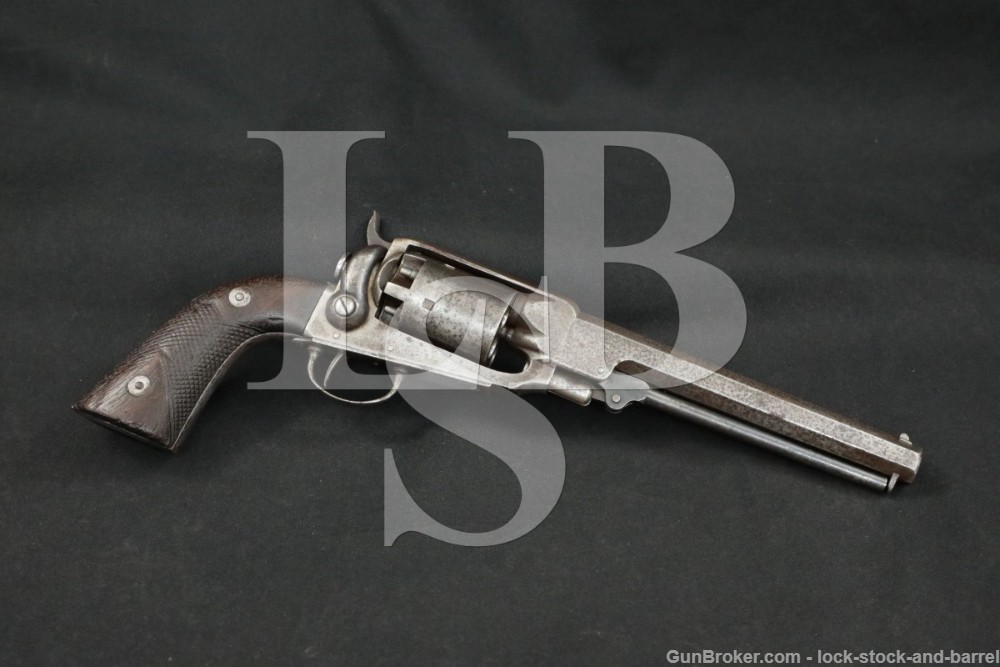 Sights / Optics: The front sight is a blade dovetailed onto the barrel. The rear sight is a “V” notch in the topstrap.

Stock Configuration & Condition: The grips are two-piece checkered walnut. Each panel has a crack on the inside at the top screw escutcheon, the right panel’s crack is visible at the top edge on the exterior. There are some scattered nicks, dings, scuffs and scratches, most notable at the bottom. The checkering is well defined. Overall, the grips are in about Very Good condition as Antique.

Bore Condition: The bore is gray, the rifling is sharp where not interrupted by erosion. There is scattered light erosion and some patches of more moderate erosion and pitting in the bore.

Overall Condition: This handgun retains about 5% of its metal finish. The remaining finish is mostly in the loading lever, hammer and trigger plate, strongest on the trigger plate around the trigger guard. Most other surfaces have worn to white, showing scattered light surface oxidation and erosion. There are several scattered light nicks, scuffs and scratches. The action shows operational wear. The screw heads range from sharp to disfigured with useable slots. The markings range from clear to worn or poorly struck. Overall, this handgun rates in about Good-Very Good condition as Antique.

Mechanics: The action functions correctly, however three of the five nipples are obstructed. The cylinder locks up with little play on each chamber. The trigger is light and crisp. We did not fire this handgun. As with all used firearms, a thorough cleaning may be necessary to meet your maintenance requirements.

Our Assessment: For one of the least-produced and least beloved of the Civil War small arms, the Joslyn revolver has quite a story. Rather than a standard pawl or arm to turn the cylinder, Benjamin Joslyn designed a rotating spring-clutch which was cammed to both rotate and move back and forward with the movement of the hammer. The revolver showed promise with its first U.S. Army review board finding it “preferable to those generally used in revolving pistols; the mechanism by which it is operated being simpler in its construction, surer in performing its functions and less liable to get out of order”. The Navy also found its first sample revolver to be suitable for use, having one failure in 275 firings, including firing the gun after a loaded cylinder was left submerged in water for more than 22 hours. That was the high point of the Joslyn’s story. Earliest production was performed at the factory of William C. Freeman in Worcester, Massachusetts. State Senator Williams of Massachusetts, presumably representing Worcester, wrote to the Secretary of War in June of 1861, requesting that an order be placed for Joslyn revolvers, insisting that there were several thousand which were nearly completed and an order of any size could be easily filled. It was not until late August that any order would actually be placed, but apparently the intervening months had not been enough to finish the manufacture of the revolvers, as the initial order for 500 revolvers to be delivered within 30 days was never filled. It seems likely that the Massachusetts politician was less than truthful (surprise!), as even the Navy’s more modest order for 100 revolvers in July had the first 50 delivered in September and the last 50 delivered in late October. The Washington Navy Yard found some revolvers in each shipment which showed defects, but they were addressed by their own machinist. Upset with Freeman’s failure to meet the terms of his contracts, Joslyn moved production to his own Connecticut-based factory. The revolvers continued to be a disappointment, with some 900 purchased by the state of Ohio to equip regiments leaving for the front lines of the Civil War. The 5th Ohio Cavalry would set out for the front in late February, its approximately eleven-hundred men armed with 900 sabers, 419 Joslyn revolvers and 120 Sharps carbines which had been acquired second-hand. While this sounds less than ideal, it is made all the worse given that the revolvers were, “condemned as wholly unfit for service. They are a spurious weapon, made out of cast iron, and one half of the time will neither cock nor revolve” in the words of Lieutenant Charles Murray of Company I following an engagement with Confederate cavalry. The revolvers were swiftly removed from service, mostly replaced with Colt’s revolvers. Joslyn had originally tried to sell his revolvers for $25, a significant sum in the 1860s, with ultimate sales being at the price of $22.50. After the war, the revolvers would be sold out of service for at most $4.00 apiece and the New York company Hartley & Graham would acquire 49 of the revolvers for just 16 cents each. While the Joslyn revolvers do not have the best service history, they did serve in the Civil War and there were only approximately 3,000 made in total. This example which still retains quite strong mechanics and matching serialized parts is a wonderful example of a very rare and collectible Civil War revolver, and will add to even an advanced collection of arms from the War Between the States. Please see our photos and Good luck!