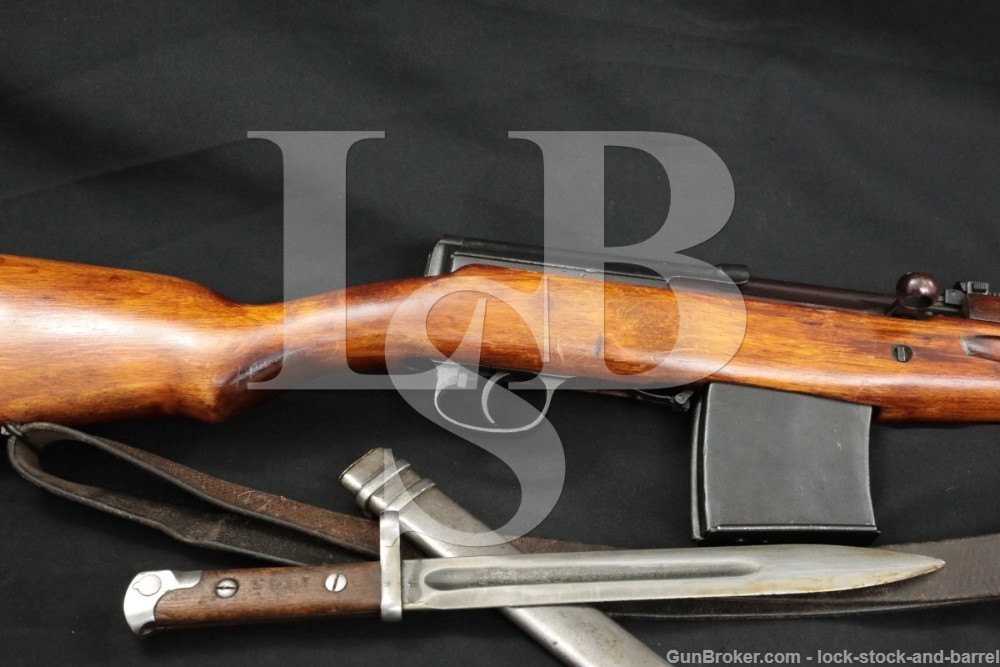 Sights / Optics: The front sight is a hooded post. The rear sight is a “U” notch blade assembly attached to a sliding escalator that is marked from “1 – 15”. The top edges of the receiver are slotted to accept a scope base.

Stock Configuration & Condition: The two piece wood stock has a pistol grip, finger grooves, ventilated handguard, ventilated metal nose caps with sling bar, through bolt, sling loop under the butt and a metal buttplate. The refinished butplate has surface erosion showing throughthe finish. It shows light scrapes as well as 2 areas which have been touched up with black paint. The metal nosecaps show oxidation. The left side of the stock shows a repair below the left rear of the receiver. The wood shows several scuffs, scrapes & scratches. Many of these marks have damaged portions of the finish. The LOP measures 13 ¼ inches from the front of the trigger to the back of the buttplate. The stock rates in about Very Good Plus overall condition.

Overall Condition: This rifle retains about 96% of its metal finish. Areas of surface erosion shows through the new finish on the receiver and top cover. Small scratches show through the new finish on the receiver, top cover & bolt carrier. Areas of the finish have been removed by the use of an electric pencil. The bolt body and handle have a plum color to them. The metal shows scrapes and small scratches. Many of the markings are deep. Overall, this rifle rates in about Very Good Plus condition.

Box, Paperwork & Accessories: The rifle comes with a Model 1940 Bayonet & Belt Scabbard which are correct for the SVT-40. The wood grip shows scrapes & scratches. The metal on the bayonet & scabbard show scrapes & scratches. The scabbard metal also shows small dents & oxidation. The belt loop is missing from the scabbard. Overall the bayonet is in about Very Good condition and the belt scabbard is in about Good condition.
The rifle also comes with a refinished 10 round magazine. It has scratches and surface erosion showing through the new finish. The magazine shows scrapes and a shallow dent. It is in about Very Good Plus to Fine condition as refinished. The rifle has a leather sling attached. It shows scrapes, creasing, discoloration and areas of light surface loss. Overall the sling is in about Very Good Plus condition.

Our Assessment: This Russian SVT 40 was made back in 1941 at the Tula Arsenal. It has since been rebuilt so it looks nice for a WWII era service rifle. Many of the markings on the metal are deep and the bore can still put rounds down range as fast as you can pull the trigger. It comes with a Model 1940 Bayonet & Belt Scabbard which are correct for the SVT-40.